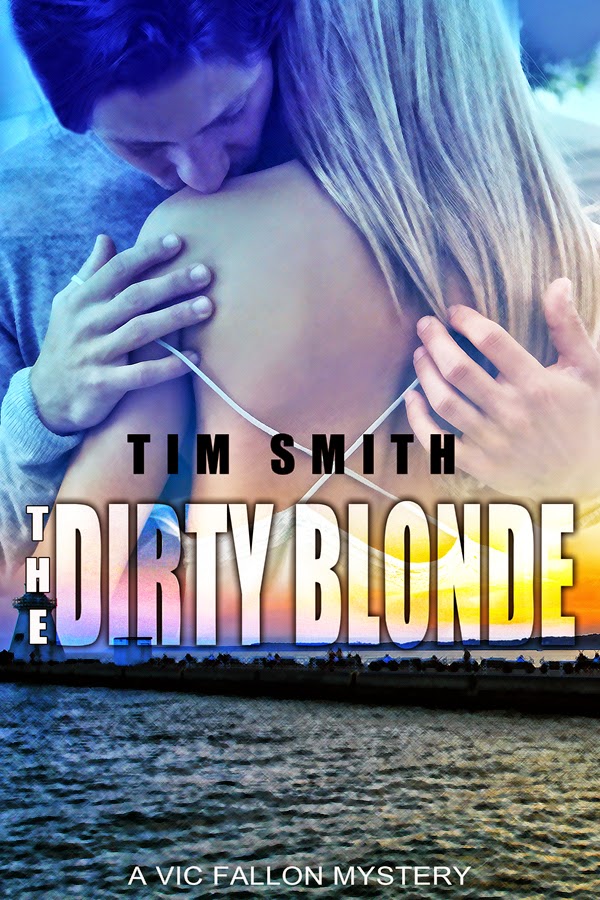 “The Dirty Blonde”
By Tim Smith

I’m pleased to announce the release of my newest romantic mystery from eXtasy books, “The Dirty Blonde – Vic Fallon Book 3.” This is a noir-ish crime caper in the style of Chandler, Westlake and Parker but in a contemporary setting. All of the elements are here – tough wisecracking private eye hero with a soft spot for the ladies, a femme fatale client who may or may not be telling the whole truth, some shady supporting characters, vivid atmosphere and snappy dialogue filled with sexual tension. The only thing missing is a cool jazz score by Henry Mancini or Quincy Jones, but we couldn’t format that into the book.

“Former cop Vic Fallon is content to live in Sandusky, Ohio on his disability settlement and take the occasional private eye job when he isn’t fishing. He doesn't really want to get involved in a missing persons case, but when Amy Bergen arrives from Tennessee looking for her estranged husband who’s avoiding divorce court, Vic is taken in by her southern charm and agrees to help her. His search brings him in contact with a local gangster wannabe, a crooked cop and a gambling syndicate. When another woman shows up claiming to be the missing man’s wife, the case takes a bizarre turn. Can Vic find the wayward husband before all of his wives catch up with him? Will his feelings for Amy develop into something more than professional?”

This is the third story in the Vic Fallon series, following “The Bundle” and “Lido Key” but the books don’t need to read in order. For the uninitiated, Vic Fallon was about to be let go from the Police force for making his point with his fists until he was wounded in the line of duty. He became a private eye but with a twist – he doesn’t really have to work and only takes a job when he’s bored or something intrigues him. He also gets involved with a different woman in each story, which keeps it interesting.

Here’s an excerpt showing his first up-close-and-personal with the heroine du jour:

Vic slowly swirled his glass of wine. “I just realized I haven’t been a very good tour guide.”
“How do you mean?”
“This is your first time up here and I haven’t offered to show you around. How would you like to take a trip to one of the islands tomorrow?”
Amy gave him a coy smile. “I’d like it fine, but is this strictly good will on your part?”
“Maybe not totally. I think we’ll find the answers to a few of our questions on Kelleys Island and I’d rather take you along than go alone. Simple enough?”
Her expression took on a bit more warmth. “Simple enough and you just got yourself a date for tomorrow.” She brought his hand to her mouth then planted a soft lingering kiss. “In fact, you may just have yourself a date for tonight. How does that sound to you?”
“It sounds like someone who’s on spring break and looking for a fling before they go back to the real world.”
She gently massaged his hand. “Now that’s what I’d call a skeptical observation. Would it offend your sense of order if I wanted to get to know you better?”
“No, it wouldn’t.”
He took another sip then looked at the darkening sky. Vic wanted nothing more than to get up close and personal with Amy, and she had been occupying a prominent place in his mind since they met. His initial qualms were now somewhat relieved after the spin she put on her situation. Apparently she wasn’t feeling inhibited, so why should he?


Vic stood, took Amy’s hand and prompted her to her feet. He led her into the living room, pulled her close and began dancing to the ballad Miles Davis was playing. Amy rested her head on Vic’s chest, wrapped her arms around him and sighed. He softly caressed her back with his open palm and inhaled her scent. He finally identified it as lavender, but with a musky quality. He also discovered that it was having an effect on his libido. He closed his eyes and enjoyed their closeness.
He tilted Amy’s face to look into her eyes and lightly brushed her hair from her face. He kissed her softly, and Amy kissed him back, making a brief exploratory mission with her tongue while Vic ran his hands along her shoulders and back. Amy pulled him closer. He brushed her soft lips with his, breathed in her heady scent. His erection pushed hard against his pants and Amy pressed her hips against his, undulating in time with the music.
She put her hand on his cheek and lightly traced his jaw with her fingertips. Her eyes had taken on a dreamy glow. They continued slow dancing while gazing into each other’s eyes. Vic slid his hand down Amy’s back, rested it on her ass and gave a firm squeeze, making her giggle. She kissed him again and put her hand on his groin, fondling his hard-on through his pants.
Vic guided her to the bedroom. He slipped his hands under Amy’s top, unfastened her bra then moved to caress her breasts. Amy pulled his face to hers to kiss him again and resumed fondling his groin. She slid down his body to her knees, unzipped his pants and freed his hardening prick. She wrapped her hand around the shaft and stroked him to full hardness, then took him into her mouth, sucking him so slowly it was pure torture. Vic inhaled sharply and closed his eyes as Amy steadily took his entire length into her mouth and massaged the swollen head with the back of her throat. She started humming “Battle Hymn of the Republic” while she sucked him.
I always liked that song, Vic thought.