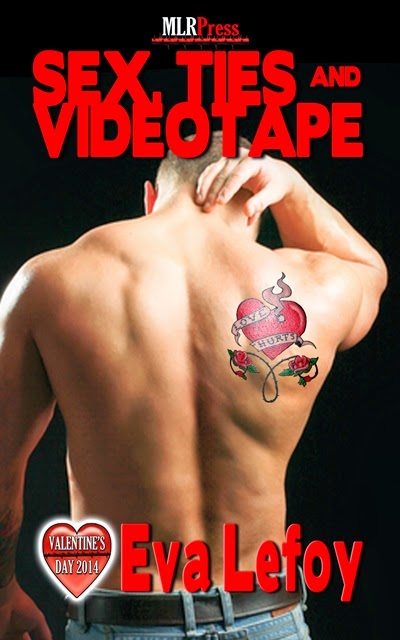 The Love Hurts series was born when I answered a Valentine’s Day call for MLR Press. In book 1, Sex, Ties and Videotape, we meet Geoffrey, a man who’s been wronged by his previous lover, Brian, in a most public way. Geoffrey’s sitting alone in a Seattle gay bar drowning his sorrows when Brian’s best friend Paul shows up. He later makes a move on Geoffrey, who can’t believe his luck – he’s finally found someone who won’t laugh at his submissive needs!

Geoffrey begged his ex boyfriend, Brian, for some bondage, not public humiliation on YouTube. On Valentine’s Day, he runs into Brian's best friend Paul, who seems intent on righting Brian's wrongs. But trusting Paul means Geoffrey has to come clean with his needs … and his feelings.
Paul sees Geoffrey in the bar and knows this is his chance to convince him he’s nothing like Brian. He starts slow and safe, setting strict ground rules. But when Geoffrey insists on a reenactment of the same dom-play Brian used to hurt him, is a safeword enough to protect their fledgling love?

Geoffrey crossed his arms and didn’t pick it up. The suspicion in his eyes was clearer than a rare Seattle sunny day. “So, what are you saying?”
Good old-fashioned fear of rejection had butterflies flying furiously inside him. Did he tell Geoffrey about his feelings, or would it scare him off? To hell with the insecurity. I’ve waited too long for this moment. “I want you. I’ve always wanted you.”
From Geoffrey’s shocked expression, he hadn’t ever thought it possible. The new-found knowledge had Paul’s hands tightening into fists and tears stinging his eyes. I swear I’m killing Brian. He did this to him. I can’t fucking believe it.
“Me? Right. Paul, you’ve known me for how long?”
Good. A math problem. He could do that. “Ten years.”
Geoffrey nodded. “Uh-huh, and in all that time, you never once indicated you wanted to bone me. So what’s changed?”
“Hell, Geoff.” Paul ran his hand over his hair. “What was I supposed to do? You’ve been with Brian the last two years.” Saying it out loud pissed him off anew, so he hurried to the next subject. “Before that, you were with Andrew,” he ticked the names off on his fingers, “before that, Carl, and then some Asian guy, I can’t remember his name…”
Geoffrey’s demeanor softened, his shoulders relaxing. “Myung.”
“Yeah, and then before him there was …well, it doesn’t matter who else. But it’s not like you’ve been available.” He took the opportunity to close some of the space between them. Getting the upper hand in this conversation helped his confidence.
“Neither have you.”
He nodded and took another step. “I know. It’s true. I’ve been with a string of guys, too. So no, I’ve never had the opportunity to tell you how much I’ve wanted you.” Now he stood mere inches from the man he desired. He tried desperately not to drool.
“Why would you want me?”
“How would you know what kind of guy I really want?” Paul placed a hand on Geoffrey’s lower back and tugged him closer. “If it’s unclear, I’d be happy to show you.” When Geoff didn’t resist, he cupped the back of his head and pressed their bodies together. His cock rubbed against Geoffrey’s thigh, and Geoff’s against his. The perfect bliss of the moment had him eager to spill right in his pants, but convincing Geoffrey he was serious came first. He angled Geoffrey’s head and planted greedy lips over his.
Sex, Ties and Videotape is available from:

Paul and Geoffrey return from their special trip to Paris. Paul plans to propose to Geoffrey but first, his urge to protect his lover drives him to close an old loophole. He visits Brian, demanding the original video he made of Geoffrey be destroyed.

Brian doesn't understand what Paul's upset about, or his dominant streak. But the clearer Paul's feelings for Geoffrey become to him, the more Brian desires to have a man love him the same way. Curiosity draws him to the local kink club, and into the arms of a man whose punishment gives him all he secretly craves.

When new and impulsive sub, Brian is injured in a bad scene, the incident opens old wounds for his sometimes-Dom, Gar. While doling out revenge, Gar must come to terms with his fear of relationships and learn the shocking truth about his former lover, Angel.

Meanwhile, Paul’s uncontrolled jealousy of Brian comes to light and Geoffrey threatens to cancel their engagement if he won’t get his anger under control. In different ways the aftermath of the sadistic Dom’s destructive force puts these four men on the track to future happiness, but some will suffer more scars than others.