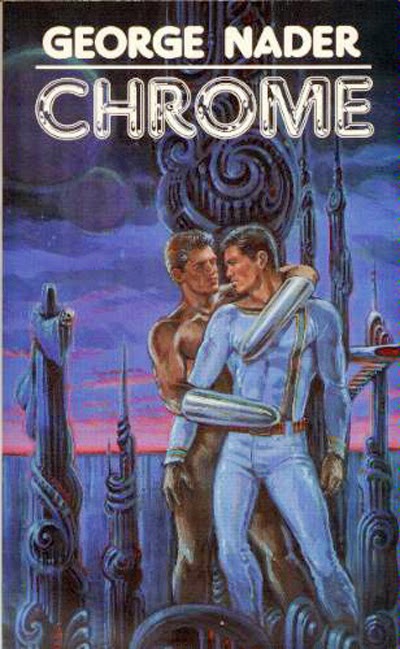 Welcome to BRB, everyone! And, thanks for stopping by.

I finished Chrome late last night. George Nader’s gay interstellar classic about a young cadet, Chrome, and the warrior King Vortex, who create a bond that defies all odds, and the rules.
In order to better understand this novel, I figured it might be a good idea to read the author’s biography. George Nader was a gay American actor, who was active from 1950 to 1974 with approximately sixty film and television credits to his name. After his career in Hollywood ended, he and his life partner, Mark Miller, moved to Europe, where he continued to find steady work; his most notable was his role as “Jerry Cotton”, an FBI agent in a German film series. After an accident during a shoot, which injured his eye, he began a career writing science fiction.
Having said that, I give the man kudos for writing this story, considering the time period in which Chrome was published (1978); society still has issues with alternate life styles today, I can’t image what the attitude was like back then. It was probably a death sentence, especially in the entertainment industry.
I absolutely love the tagline for this book. It’s priceless. ‘In the future, there will be only one taboo: to love a robot.’ Sex with a robot is naughty enough, but sex between a male robot and a man…. Well, it made me giggle. Chrome is eloquently written. The characters are truly wonderful. Chrome, the main character, is sensitive, thoughtful and a little naïve, particularly in the beginning, but that’s understandable because he is so young. Vortex, on the other hand, is rough, aloof, and an extremely powerful individual in mind, body and spirit; after all he’s a warrior of the most ruthless kind, according to Chrome, the narrator.
Chrome is truly of a delightful nature, and I became attached to him and drawn into his world almost immediately. But, as for Vortex, it took time before I could really appreciate him. I read the first one hundred and some odd pages in a couple hours, enthralled, and needing to absorb more. But, by a third of the way through, the story seemed to go haywire, and it steadily went down hill until last night, when the last chapter left me feeling, and the only way I can describe it, disenchanted and robbed. After the emotional roller coaster that consumed nearly two thirds of this book, that drove me, the reader, as well as the character Chrome, insane, I wound up seriously disappointed in the end. I’ve always been reluctant to judge any author’s work based solely on storyline, because as an author myself, the plot is somewhat of a personal journey. No two are alike, and can be messy just like real life. But in this instance two thirds of this book could’ve been condensed to one chapter or less, and there are so many better directions the story could’ve gone.
The romance and love that blossomed between robot and man, in the beginning, was nothing short of erotic and passionate, and thoroughly enjoyable to experience from Chrome’s perspective. Loved it! As for the rest…. I felt cheated. Cadet Chrome deserved a grandiose ending. I, the reader, deserved a grandiose ending! He should've been saved by his lover, not hang by a thread until he was mentally beaten into a pulp. This was a difficult one to judge. 3.5 Stars. 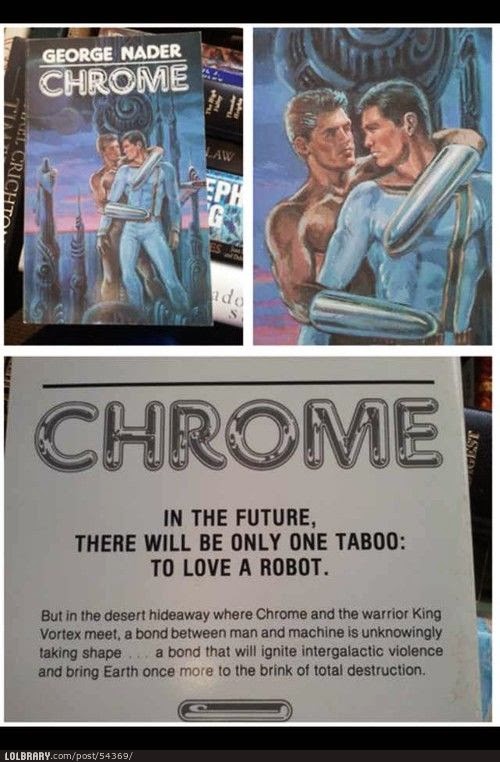