I am Obsessed With Alpha Male Characters! 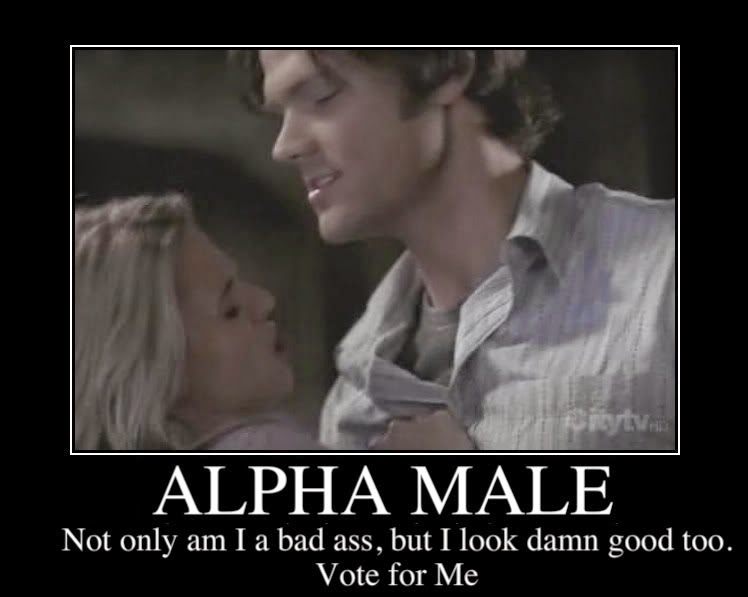 I remember the year 1997 being a defining time in my life when regarding Alpha Maleology (yep I totally made up that word and now it's a thing). It was the year that My Best Friend's Wedding and GI Jane came out. And the Julia Robert's film (My Best Friend's Wedding) out performed expectations as did GI Jane. Why? Because neither, according to a film industry professional, had a typical 'alpha male' as a lead character and they were still doing well. Come to think of it, that entire year was kind of-- how shall I put it-- scarce on the hottie front. At least for me. And believe me, that hurt a lot.
Don't get me wrong, I liked some of the films that were released that year-- like Air Force One, Nothing to Lose, Volcano, Kiss The Girls, In and Out to name a few.  But for me, they lacked  my normal serving of hottie hunkiness.  What can I say?  I like my leading man candy!
When I think of an alpha male- character wise, he has to feel compelled to not only save his friends and family but the world too while gaining the love and trust of his woman.
Yes, that's a difficult order to fill.  But I always say, when you do something, do it right or not at all.
There are prerequisites involved to be admitted inside this exclusive club.  First, he must be hot!  Tall and good looking is desired but not a required.  Because hotness can be an internal quality.  He may not be considered traditionally handsome but when his 'can-do' personality is added to his nice physique-- believe me, it will put him over the top. 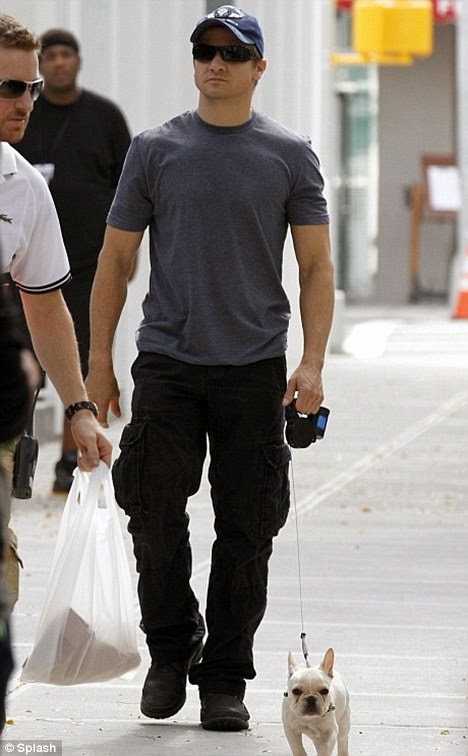 For example, Jeremy Renner in most circles would not be considered a gorgeous man.  From what I've read, he's not exactly six feet tall and he has an unusually shaped nose!  And in most of his movies, he wears a broody expression that tends to draw his features downward.  But damn if that man doesn't have a hot bod on him and a 'fuck it all, try to keep up attitude!'  He's all alpha to me.
Another qualification for a leading man alpha is his underlying intentions.  They must be good even if his methodology is flawed.  Okay, I realize I'm about to shoot myself in the foot with this example but I think these next characters (in another life) could have been good guy alphas.  John Harrison aka Khan in Star Trek: Into Darkness and Loki Laufeyson in Thor I, II and the Avengers.  I'll start with Khan/Harrison.  Let's put aside the fact that I find Benedict Cumberbatch good looking.  Not gorgeous.  Just good looking.  However when I saw him in Star Trek, his 7 rating shot up to a 9! 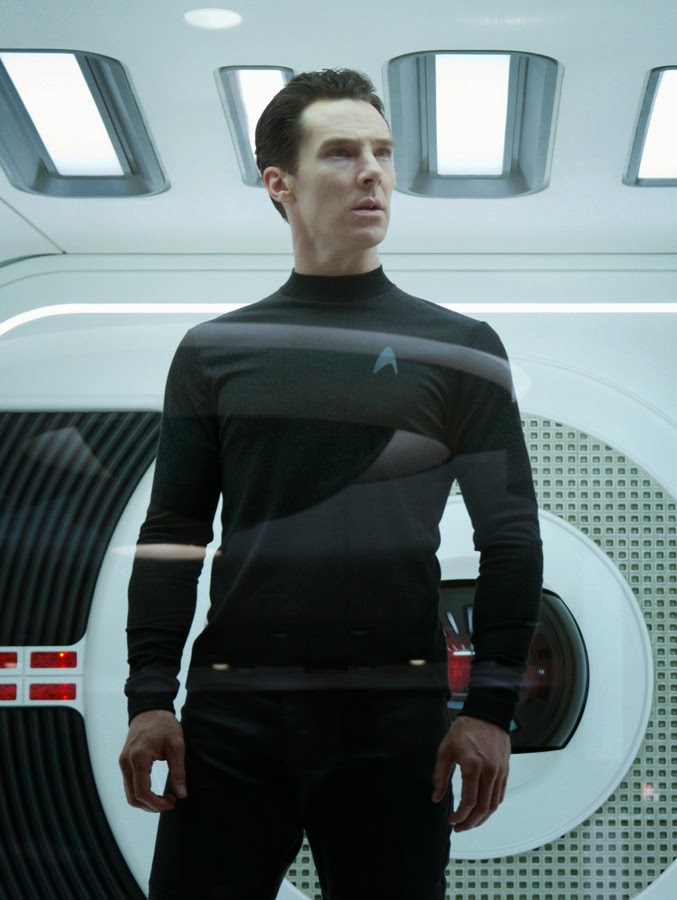 First, his physique fit the bill.  In this movie he was buffed to the nth degree. The powers-that-be in the make-up department dyed his hair a raven black color which contrasted so well against his starkly blanched pallor.  As a genetically engineered superhuman, he was strong, hot and smart.
Second, he was a natural leader.  Though all of his crew was in hibernation, he still felt responsible for their welfare.  He thought about them constantly and did things he considered to be good for their continued safety- just like any captain would.  He thought like a leader, he planned like one and he fought the same way.   John Harrison/Khan oozed charisma, leadership, smarts and good ole fashioned know-how.  He was so charismatic, he managed to convince his mortal enemies-- Captain Kirk and his crew-- to trust him, if only briefly.
Ojay I'm not discounting the fact that he was nuts. I like to think his final break down happened when he was told by the people who were supposed to be the good guys, that his entire crew (whom he considered family) had been killed.  He cried over it.  It broke him.  And in his  mourning, he sought revenge.  (Spoiler-- it turns out, they weren't dead, but still he thought they were.)  Okay so maybe destroying an entire city block and subsequently an entire bunch of star ship captains may have been a bit much-- but he did it because he was unable to forgive and get past his pain.  Yes he was a bit kray kray...but at least he was consistent throughout the entire film and we sympathized with his plight. 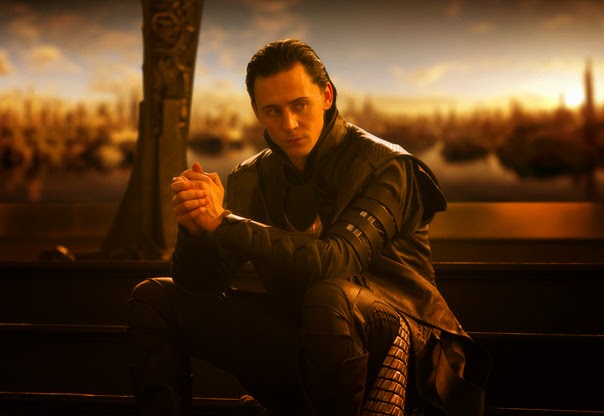 Then there is Loki.  Just watch the first Thor movie and you'll see why the poor man went nuts.  And by the time Thor 2 came around, his adopted father had decided that the word nor the concept of forgiveness existed despite the fact that he'd spent a lifetime lying to his son! I ask you this, how can Loki practice forgiveness when his own father won't even do it?  But I digress.  Loki possessed confidence, strength, battle smarts, cunning and common sense (something his older brother lacked in the first part of Thor I).  He knew he could run the kingdom, like Khan/John Harrison, he went about obtaining his goals in the wrong way.
The last thing thing that makes a great alpha male is that he must be willing to or is already fighting for something other than himself.  We all know that one of the typical characteristics of an alpha male is that they think own their world.  But they also have a need to protect, to look out for others.  In my book, 'Blood Bond- The Ferae', Colton McClain's family and friends are threatened by an enemy from his past.  He's determined to protect the people he loves as well as send a message to any future competitors who may contrary plans in mind. 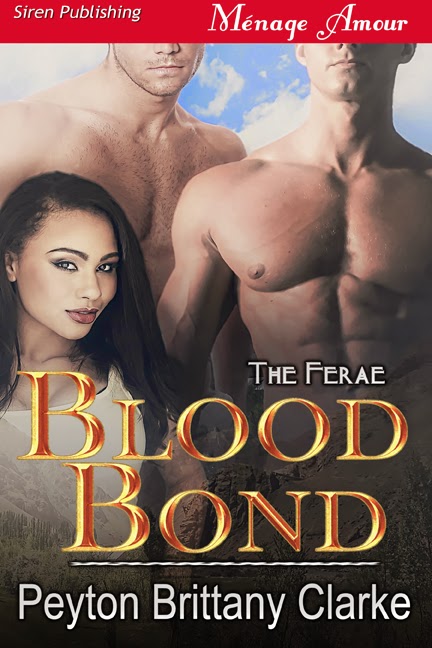 An Excerpt from Blood Bond- The Ferae.  An MMF:

Enraged, Colton squeezed. Frank’s eyes bulged as he struggled for air. Suddenly, he recalled Lizzie’s words. She was right, if he killed Frank, the sires would revolt. He released him.
“Unlike you, I have a regard for life. You’re going for a ride in my trunk and I’m bringing you up on charges before the Council. And when they hear to the full extent about what you did, they’ll take everything from you. You won’t even have your family.”
Frank reared up and charged him, causing Colton to stumble. He punched Frank in the stomach, then kicked him in the groin before hitting him in the chin. Frank fell to the ground. A warm liquid dribbled down the shoulder of his ripped shirt. Colton wiped the
liquid. It was blood. Tasting it, he discovered it was his own. Frank had bitten him.
“You piece of shit.” He placed his foot on his chest. “I was going to spare you because it’s what my wife wants. But not now.” Colton pulled out a large bowie knife he brought with him. “Fuck the sires. They can all kiss my ass.”
~~~
Colton McClain possesses all of these characteristics which makes him an incredible Alpha Male! Creating him and his counterpart Jarrod added to my love for this type of book boyfriend!

Author Bio:
Peyton lives in Michigan where she dreams of summers that aren't so humid. She and her husband have been married for over a decade and he often lends a helping hand or opinion or two when she's writing a steamy love scene.
She loves to travel and hopes to make it to a romance writers convention sometime soon to meet her idols in the genre without getting too much "stalkage" in the process.
When she is not on the net, she is reading about the life of her latest "book boyfriend"from a favorite author or in the midst of creating her own.
If you'd like to to contact her, drop her an e-mail. She loves hearing from her fans and admirers.

Thank you Blak for having me on your blog!
You're very welcome, Peyton, and thank you for stopping by. Great article! :)
Posted by Blak Rayne Books Blog at 11:00 PM