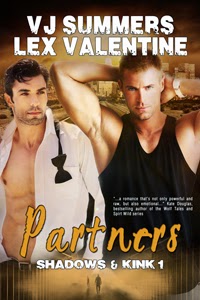 By Lex Valetine and VJ Summers


"Now," Ian announced in his most dictatorial voice, the one that secretly amused Travis because the smaller man actually seemed to think he was in control, "you and I are going to dance."


Then there was nothing amusing about it because Ian was in control. He slithered up against Travis' chest, one leg slipping between Travis' thighs.  Grabbing Travis' hands, Ian planted them on his hips and began to move. It wasn't a nasty, headed for the backroom grind. Ian kept enough space between them that their bodies barely touched, just a brush of fabric here, a rustle of denim there.


The Brit's hands slid up Travis' arms, coasted over his shoulders, and finally locked behind his neck. Ian may have taken control, but everything in his body language screamed at Travis to take the lead. Amazingly, he did.


It was unbelievable how perfectly their bodies moved together. Ian had been right, though he almost never danced, Travis recalled his mother telling him he had a natural rhythm and a well-trained physical grace that guaranteed he’d be a superb dancer. He used all that neglected skill now, tugging his partner closer, guiding those slender, snaky hips with his grip. Still not quite grinding, but moving closer, sinking into the music and each other.


The song changed, the tempo slowed even more. Ian moved closer, pressed against him from chest to groin. Their thighs interlocked like pieces of a puzzle. Now they were grinding, and to his horror, Travis couldn't control his response, his cock hardening in a rush. He didn't know if it was better or worse when he realized he was rubbing against Ian's equally hard and ready erection.


The smaller man looked up, pale skin painted purple, then green, red, and blue by the fancy club lights. They disguised the silver of his eyes, left them almost colorless. Colorless, but not emotionless. If he hadn't known better, Travis would have said he could see all his own confusion, anger and fear, mirrored back in Ian's silvery gaze. But he did know better.


That realization, that admission of how much he wanted the man in his arms, jolted him back toward reality, and he closed his eyes. Lifting his hands, he prepared to disengage. He'd make it to his room, lock the door, and pretend this wild moment out of time was just another of his dreams.


Ian apparently wasn’t done with him though. As Travis released his hips, the Brit turned and backed up against Travis, his body moving in time to the song. With every move, his perfect ass ground against Travis’ groin. Gasping, Travis found himself beginning to move with Ian. The sinuous movements of the other man made Travis’ cock stiffen even more. As Ian ground his ass against Travis’ pelvis, as the warm, exotic scent of Ian filled his lungs with every breath, Travis had the sense that his orgasm wasn’t far off. It wouldn’t take much at all for Ian to make him come in his jeans like a horny teenager.


When Ian reached back and pulled Travis’ arms around him, the dance began to change. Ian rubbed Travis’ hands all over his chest and hips. With the feel of warm flesh over hard muscles beneath his palms and firm globes of Ian’s ass writhing against his cock, the last of Travis’ control slipped its leash and he suddenly didn’t care if Ian made him come like this.