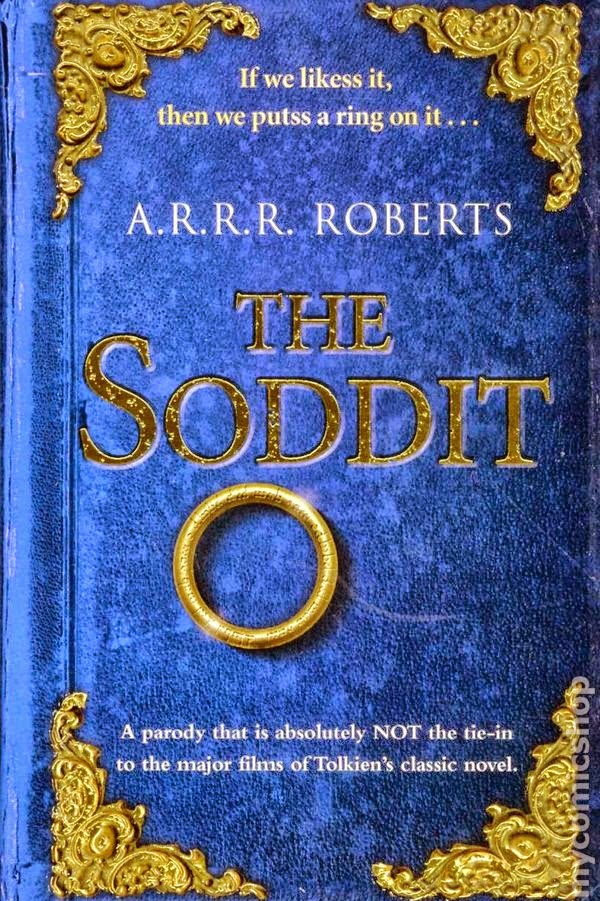 Who doesn’t like a good parody? Parodies are part ’n’ parcel of anything deemed popular, which includes fandoms. If you’re a fan of anything like a particular TV show or movie series or a novel series then you know exactly what I’m talking about. There are fandoms for Star Trek, Sherlock Holmes, Vampire Diaries – and the list goes on and on. Fandoms crossover and others collide. And there are offshoots of each fandom that run the gamut from slash fiction, fanfics, fan art to cosplay and other things like that I won’t mention. Then, of course, you have to add the parodies; those humourous stories written in honour of the original creator. Which brings me to my book review.

Originally published in 2003, I can’t say that The Soddit - tag line ‘If we likess it, then we putss a ring on it…’ written by A.R.R.R. Roberts was a favourite read, or that it was the worst I’ve come across. The deliberate exaggeration of characters, play on names, long-winded explanations and half-a-page-in-length sentences were quite amusing initially and I did laugh on occasion, but then the story became a bit tedious by the end. But, on the other hand, Mr. Roberts addition of droll sarcasm was ingenious, as well as his descriptions of the The Soddit world and its most unusual inhabitants. The author has definite talent when it comes to writing, what I'd classify as the ultimate parody; obviously it's something he thoroughly enjoys. One thing I did love was the names. Who wouldn’t love a name like Bingo Grabbins? Or Gandef and Thorri (King)? And the drawings by Douglas Carrel, were exquisite. If you’re a J.R.R. Tolkien fan, and you can keep an open mind, then you’d probably find The Soddit an enjoyable read. 3.5 stars!