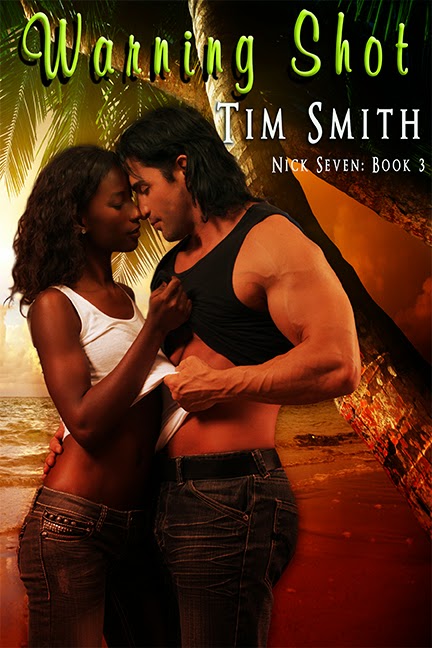 What genre do you currently write? And, is there a genre you'd like to write, but haven't tried yet?
I write romantic mystery/thrillers and I’ve also written a few romantic comedies. The mystery stories are the most fun, since that’s the genre I like to read. The rom-coms are something I do to challenge myself, because I write about realistic relationships. I’ve never written a true crime story but would like to one day.
Many authors use a nom de plume, and they may use one opposite to their own sex. Do you think an author's sex or sexual orientation should dictate what genre they write?
Not really, as long as the story is believable. I have a male author friend who writes erotica under an alias, using his initials, and all of his stories are told from the woman’s point of view. Apparently he’s good at it because everyone assumes he’s a female writer. It cracks me up when I read a review of one of his books and the person refers to him as “her” or “she.” I know someone else who writes lesbian romance and she’s straight. One of my stories featured a tryst between the hero and two women who are bi-sexual. Apparently I got it right because no one pointed out any errors.
Some authors have issues with character development, writer's block, plot summary etc. What is the biggest challenge you face when writing? How do you overcome the problem?
My biggest problem is making sure all the dots are connected. There are times when I’m writing a mystery/thriller and I’ll come up with a really neat idea halfway through then realize that I didn’t set it up earlier. Other times I’ll get to a point and not know what I want the characters to do next. The best remedy for that is to put it away for a few days.
Another challenge I’ve had to overcome when writing sex scenes is making sure I include the emotional reactions from both characters. My editor is very quick to point out the importance of post-coital chat. I’ve lost track of how many times she’s inserted the comment “But what were they feeling afterward???”
What has been the single most successful marketing tool you've used to date?
Blogging and doing guest spots like this. It’s provided tremendous exposure.
If you had to live as one of your characters, which one would it be, and why?
Nick Seven, the former CIA spook who hangs out in the Florida Keys. He gets to do all the things I can’t, like live in Key Largo with a Barbadian beauty named Felicia, get involved in some interesting adventures, and he never loses at Blackjack. Plus, the man puts away an ungodly amount of scotch and somehow never wakes up with a hangover.
While writing, have you ever drawn from personal experience, and why?
Yes, because I like to keep it real, especially when I’m writing about relationships. Some of my most realistic passages were inspired by something that happened to me or someone else, especially the funny stuff. I’m careful not to make the characters too easily identifiable, though. One story I wrote a few years ago was completely inspired by a personal experience. Many writers will say that they don’t get inspiration from real life, but I think they’re either lying or trying to avoid a potential lawsuit.
Just for fun–
What is your favourite colour?
Blue, because it usually matches my mood, whether it’s bright sky or dark midnight.
Which do you prefer: a little left to the imagination or explicit?
I tend to gravitate toward the explicit. If I’m reading a book that promises a bonfire and it’s as hot as a used can of Sterno, I’m disappointed.
When you first met your partner what drew you to her first?
Her eyes and her smile.  The bright blue eyes hooked me first and her smile told me there was no escape.
If you could spend the day with any famous author, who would it be? And, why?
James W. Hall, because I’m a huge fan of his thrillers.
If you could indulge free of any consequences, what would be your ultimate sexual fantasy?
Spending an evening in a Jacuzzi with Khandi Alexander, Vanessa Williams and Selena Gomez. And a pound of Viagra.
LMAO Love this answer, Tim!

Nick Seven and Felicia Hagens left the CIA for the laidback ease of the Florida Keys, leaving behind a life of intrigue. When Nick’s former mentor becomes part of a conspiracy with international repercussions, Nick breaks his self-imposed exile to stop him. The case throws Nick and Felicia into a juggernaut of espionage, government cover-ups and political assassinations. Will they succeed in stopping the plan in time? Can their relationship survive another unwanted adventure?

Nick brought her hand to his mouth then kissed it. “This is one of the reasons I’m glad I have you around. You always keep me focused.”

“Is that the only reason you’re glad I’m around?”

She moved to Nick’s lap then kissed him while running her fingers through his hair. “I’ve got nothin’ but time, Tough Guy.”

He caressed her cheek. “You’re resourceful, self-confident and independent.”

“You just described a Boy Scout. Can’t you do better than that?”

He kissed her. “You’re incredibly hot, passionate about everything and waking up next to you makes all my teenaged dreams come true.” He paused. “Plus you make a mean stir-fried shrimp.”

Felicia laughed and lightly smacked his arm. “Is that the best you’ve got? You were always better at foreplay.”

Nick kissed her a bit longer. “You make me feel alive and I can’t wait to start every day all over again with you.”

She cupped his cheek and peered into his eyes. “That’s what I was gonna say. It’s kinda hard to explain, but when I first saw you, all that time ago in London, it was like a jolt of electricity went through me. Then when you quit and I left to go back home, I felt this big empty inside, like somethin’ vital had been taken away.”

He traced her jaw with his fingers. “Same thing I felt. I’m glad we finally got together.”

She rested her lips on his and they kissed deeply. Nick inhaled her scent, a libido-boosting blend of Giorgio Red and her natural body chemistry. He massaged the back of her neck while Felicia caressed his cheek. The longer they kissed the more aroused Nick became.

Felicia pulled back slightly and smiled. “What’s that I feel pokin’ me from underneath?”

Felicia kissed him with more energy, slipping her tongue into his mouth. Nick’s hand traveled down her back to massage her ass. Felicia ground her pelvis against his leg and moved a hand to his crotch to fondle him.

“Hon, you’ve got me all wet,” she whispered.

Nick scooted out from under her, removed Felicia’s slacks, then positioned her legs over the arms of the chair. He buried his face between her spread legs and licked an exploratory trail along her thighs. He teasingly ran the tip of his tongue over her moist lips, taking in her musky scent before probing inside her. Felicia moaned softly and ran her fingers through his hair. While he licked her, he unfastened his pants to set his hard-on free.

Felicia purred while she ground her pelvis against his mouth and tongue. Her taste and scent were an instant aphrodisiac that made Nick’s head swim with lusty anticipation and excitement. He locked his lips around her hard clit and sucked it while running his tongue over it. Felicia’s moans of enjoyment increased the longer he worked on her until she took in a sharp rush of air and pressed against his mouth. Nick licked her through her climax and enjoyed her taste.

Nick got on his feet, rested his palms on the arms of the chair, then took his position between Felicia’s legs. She grabbed his cock and guided him into her. He rocked his hips back and forth in a slow steady rhythm, swelling more with each thrust. Her tight wet tunnel enveloped his hardness, massaging him into heightened excitement with each push and pull. Felicia closed her eyes and ran her palms along Nick’s chest. Her personal scent wafted to his nose, increasing his desire. He moved faster, then took in a sharp, quick breath when he felt himself swell and explode inside her. Felicia rocked her hips against him, through every wave of his orgasm. Nick felt lightheaded as euphoria washed over him like a warm surf.

Nick exhaled a contented breath. “Guess we aren’t so bad together, huh?”

“Mmm, we’re very bad together. That’s what makes us so good.”

Thanks for stopping by, Tim! All the best. Blak Rayne
Posted by Blak Rayne Books Blog at 10:30 PM