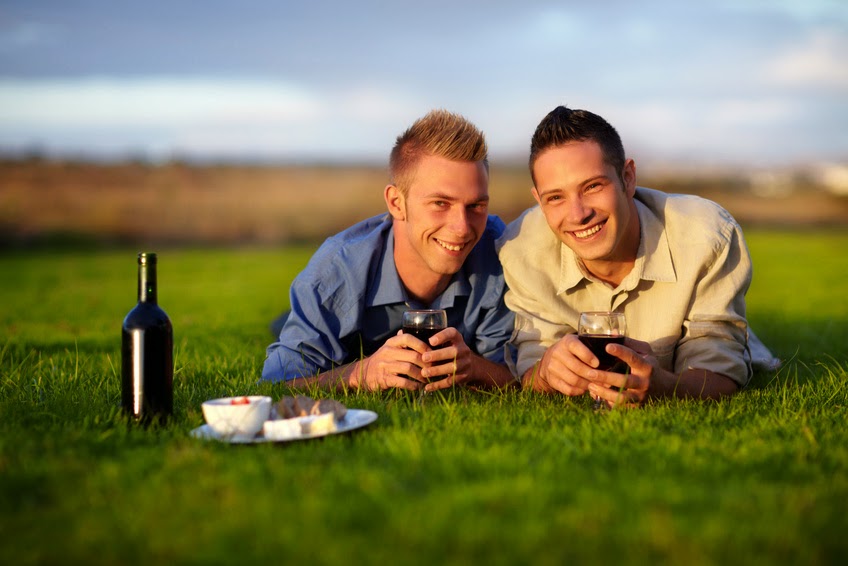 The topic of this article is an issue that's close to my heart, as I believe in freedom of choice for all. I just love the picture I've added with this post. There's almost a childlike innocence about it, where the two men seem to be truly happy. But, if you look deeper, I think you'll see much more. Perhaps, an incredibly strong bond based on love? Marriage...
There are certain things in life that most of us take for granted. For instance, all of us know when we get up in the morning there will be oxygen to breathe, our country will be intact, and our family members are alive and well. We know the grocery store is down the road and the car is in the driveway. If we're married, we trust that our partner should be lying beside us, safe and sound.
My husband and I have several rituals. In the morning (if he's not at work) we cuddle, kiss, and talk for a few minutes. I never let him get away without telling him, I love him, and I must also wish him the best for the day ahead. I don't know why, but that's what we do. Then at night when he gets home (either before or after dinner) he'll drag me to the bedroom and we repeat the same ritual. It's quality time, and I swear it happens every day. My hubby would never admit to a soul, but he lives for the affection. **oohh and aww** LOL
Now, step back, and think about this for a minute. Shouldn't everyone enjoy the same as we do and millions of other couples like us? What about same-sex marriages? Are you opposed to the idea? Or do you support it?
I believe everyone has the right to marry whomever he or she chooses. Hey, at least it's legal, right? Wrong! Same-sex marriage isn't legal in every country. In most, homosexuality and marriage are punishable by imprisonment or death. Yes, I said death. In most of the Arabic, African, and Asian nations homosexuality is far from tolerated. It's a scary thought, that what I take for granted so many others can’t. I live North of Sixty, and I can honestly say, that Canada did something really historic 9 years ago, and it's something I'm quite proud of.
*Wikipedia
On July 20, 2005, Canada became the fourth country in the world and the first country in the Americas to legalize same-sex marriage nationwide with the enactment of the Civil Marriage Act, which provided a gender-neutral marriage definition. Court decisions, starting in 2003, each already legalized same-sex marriage in eight out of ten provinces and one of three territories, whose residents comprised about 90% of Canada's population. Before passage of the Act, more than 3,000 same-sex couples had already married in these areas.[1] Most legal benefits commonly associated with marriage had been extended to cohabiting same-sex couples since 1999.
The cool part about the whole thing...in Canada you're permitted to legally marry, you're also permitted to legally disperse your estate, pension, and death benefits to your same-sex partner. Basically, whatever a heterosexual couple can do, the same-sex couple is also at liberty to do the same. You want to divorce…well you're going to pay the same. You want to have kids–go ahead! In the eyes of the law everyone is equal! Very, very awesome!
I just wish that the rest of the world would do the same. There are far more important issues that need our attention, our as in 'us as human beings'. What about the violation of human rights? What about the environment? The homeless? Those that are starving? I could go on and on, but I don't think it's necessary. Have a great weekend!
Happy Yaoi Hunting
Blak Rayne
http://www.blakraynebooks.com
Posted by Blak Rayne Books Blog at 10:37 PM