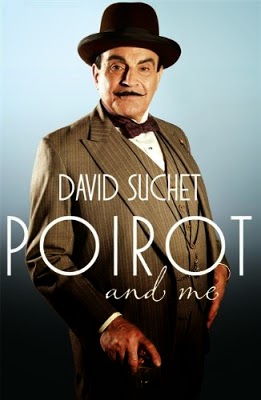 Welcome to BRB, everyone! I thought I'd post a book review, something different for a change.

It’s been a long time since I’ve picked up a biography. To be honest, autobiographies/biographies are usually a last choice when I peruse the bookstore, unless I admire the person, or find them fascinating for whatever reason. I’ve also had a voracious appetite for books since childhood, thanks to my father, and I’ve had a thing for ‘whodunits’ or mysteries since then. I spent many an hour watching the best of British mysteries on stations such as PBS Masterpiece Mysteries, Knowledge Network and CBC. Shows like: The Adventures of Sherlock Holmes, Poirot, Miss. Marple, Frost, Morse, Prime Suspect, Cracker to name only a few. Adding to the list, I now watch when time permits: Elementary, Longmire, Jesse Stone, BBC Sherlock, Murdoch Mysteries, Midsommer Murders, Jack Taylor, Single Handed, Wallander, Luther etc. So, I’m fairly knowledgeable when it comes to British actors. And, since I’ve read almost all of Dame Agatha Christie’s novels, I felt David Suchet’s autobiography ‘Poirot and Me’ might prove an interesting choice, well, an obvious choice.

Written by David Suchet and Geoffrey Wansell, ‘Poirot and Me’, allows the reader a glimpse into the making of the Poirot movies, through the actor’s eyes, as well as providing informative tidbits about Poirot’s creator, Agatha Christie. Whether you’re a David Suchet, Poirot, or Christie fan, I highly recommend you read this book. David’s recollections of the finer details of each movie and Agatha Christie’s books is superb, and his personal view of the character and how Poirot affected his life, simply poignant. He also offers some great photos he took while on set. I’d say he’s definitely Poirot’s biggest fan.

The only bad thing about the book, if you can call it that: if you’re hoping the book will provide a real intimate portrait of David Suchet, you’re not going to find it. Though he does recount parts of his life (generally his acting career), the novel is basically devoted to his portrayal of Poirot.

I give Poirot and Me 5 stars!

P.S. I know Longmire, Elementary and Jess Stone are American shows, and Murdoch Mysteries is Canadian. :)