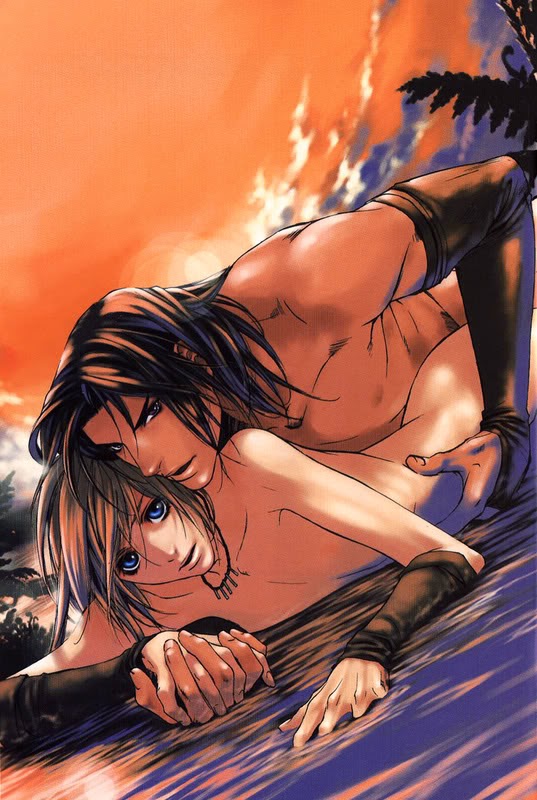 My choice for the number five slot is Wild Rock written by Kazusa Takashima. Other manga by Ms. Takashima are as follows:

Picture this…. Prehistoric men in skimpy loincloths, and steamy lovemaking! Enough said, huh? Here's the synopsis, brief as it is. Wild Rock is divided into three short stories: Wild Rock, Innocent Lies and Child Rock. The first story is about Emba and Yuuen. Emba and Yuuen are heirs to opposing clans in conflict, the East Forest Tribe and Lakeside Tribe. Yuuen is in the forest hunting and minding his own business when this lion tries to attack him. Yuuen is the uke and no match for the ferocious beast. Next thing you know this big, strong and handsome young man pounces from the trees and kills the lion! Okay...a little cliché, yes. But that’s how the story begins. Emba (the big handsome seme) saves Yuuen and it’s love at first sight, for both men, though nothing is verbally stated until much later.

Yuuen’s father Yuni fears for their tribe’s welfare because the Lakeside Tribe (Emba’s people) are killing all the big game. So, he forces Yuuen to pretend he’s a woman, in the hopes he’ll sway Emba’s thinking in favour of their tribe. It’s a simple pretext that works too well and regardless of Yuni’s plans the young men end up falling in love. I’ll stop here, so I don’t spoil the entire plot.

Innocent Lies is actually a prequel to Wild Rock. This is a story that involves Yuni and Emba's father Selem, as younger men. Yuni steps into an animal trap set by Selem and is injured as a result. Selem nurses Yuni back to health. Selem knows that Yuni is the heir to the East Forest Tribe, but Yuni doesn't realize that Selem is the heir to the Lakeside Tribe. As time goes by feelings develop between the pair, but at the end neither is willing to sacrifice their status in order to remain together.
Child Rock is a very brief story (if you can call it that) about Emba and Yuuen years after Wild Rock, when they spend the day together babysitting Nava (the offspring of Emba’s sister and Yuuen’s brother).

Okay, I’m not going to mince words. Wild Rock is well-drawn with utterly gorgeous characters. I’d take Emba any day of the week–actually I’d take his old man too! LOL And Yuuen is the quintessential uke. So, what is it this yaoi lacks? Well, it lacks backbone and I’m referring to the plot. The plot was too simplistic and predictable. I couldn’t sink my teeth in, not enough meat on the bone I’m afraid. Here’s my rating–art A+, plot C+, sex mild and the translation questionable in spots. My overall score is a 3.5 flame because I felt Wild Rock had potential for so much more.