Welcome to BRB, everyone! To start the week I’ve decided to post a couple of quick reviews, one book and the other a movie. Lately, I’ve been pretty hard pressed to find the time to actually read, or watch anything. My writing has taken precedent, and more than likely it will remain a trend from now on. In order to write and get the books out, you need to allow the time. I’ve got one novel awaiting the editor’s eyes, and three more in the works, as in the books are currently being dragged through an extensive revision. Then I have another two novels that need completion. Which explains my lack of time to read. But, I will persevere. 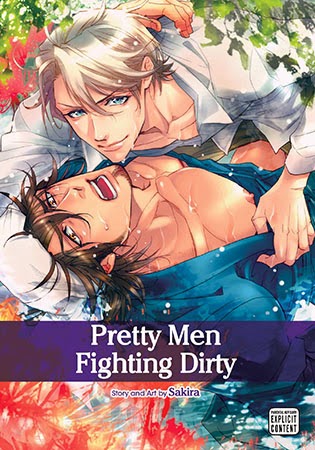 My first review is the yaoi ‘one shot’ Pretty Men Fighting Dirty, story and art by Sakira, which contains an anthology of short stories in a 197 page volume.  Okay, firstly, I refuse to take the time to write out a synopsis for each story because really all the stories lacked a decent plot; therefore I couldn’t write a synopsis if I tried. The whole point of PMFD was…there was no point. We’re talking a compilation of sexy men screwing with mediocre segues thrown in. Everything that happened to the characters was predictable. Basically, to put it bluntly the book was a f*** fest from the first page to the last. The only good thing I can say about Pretty Men Fighting Dirty is Sakira is a half decent artist. The characters were somewhat attractive, proportionate, but not the normal uke/seme in appearance, more muscular instead. If you’re into meaningless sex, with no imaginative storyline, I say you’d probably enjoy the book. But if you’d like to read about more than just sex, the book isn’t for you. Sadly, I give Pretty Men Fighting Dirty 1.5 stars.

The movie Mulligans is 2008 gay drama directed by Chip Hale. The scenario: older man finds himself attracted to his son’s best friend. Well, to be precise, the attraction is mutual. The acting wasn’t award winning, but it wasn’t so bad that I couldn’t watch until the end. The simple plot would’ve worked even better if there were a little added spice. Not that the sex needed to be hot ’ n ’ heavy, but I had expected a little bit more for their first time other than them kissing then a fade away shot. Where was the sex? Where was the petting? Anything? These men were supposed to be crazy for one another, and the older man had never done it with a man before, considering he’d repressed his sexual preference all his life by marrying his best female friend and having children. So, under the circumstances, I assumed he would’ve shown some excitement – been thrilled to be alone with Chase (the younger man), but he didn’t show anything. Sadly, after a lackluster build up, dreary acting, and half a minute of dull lip-action then a very poor ending, the movie proved to be a downer when it had the potential for so much more. I give Mulligans 2 stars and a :P!
Posted by Blak Rayne Books Blog at 10:22 PM