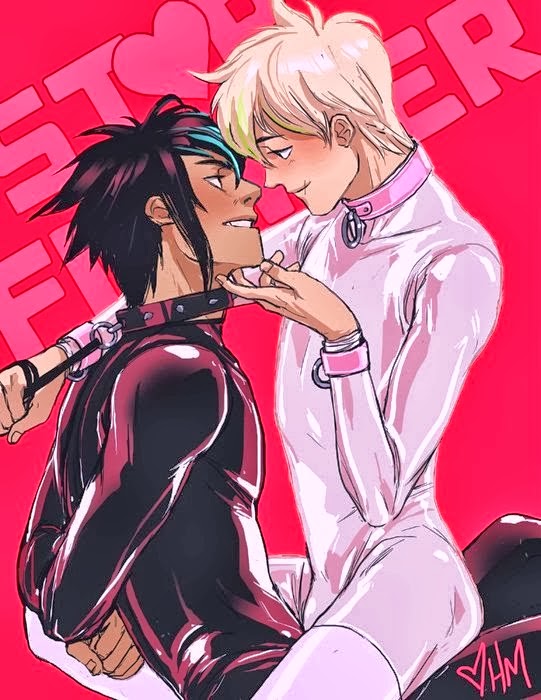 Welcome to BRB, everyone! As promised, I've posted another yaoi review. I hope you enjoy it and have a great weekend!

The yaoi I’ve chosen for number six is ‘Starfighter’ and, I must say, I’m very impressed because it’s rare to find a North American artist that is exceptionally talented with her own distinctive style. Hamletmachine is taking the yaoi scene, quite literally, by storm. Everywhere I look, I find her banners and a growing fan base. This isn’t to say there aren’t other equally as talented NA yaoi artists. Just as eBook authors, there’s a new yaoi artist born every day and some do have a definite gift. But, for now, I’m sticking to the ones I know and appreciate.

Getting back to Starfighter, as you’ve probably guessed, I’m an avid fan. I first noticed Hamletmachine’s work @ Deviantart, where I’ve had a membership for several years. I immediately fell in love with Hamletmachine’s raw and gritty but also unique style. Something about it caught my eye–it isn’t beautiful in precision like Kazuma Kodaka or Ayano Yamane, but her work is still beautiful in it’s own right. Perhaps it’s the retro seventies movie poster feel, I’m not sure. Whatever it is, I’m in for the long haul. 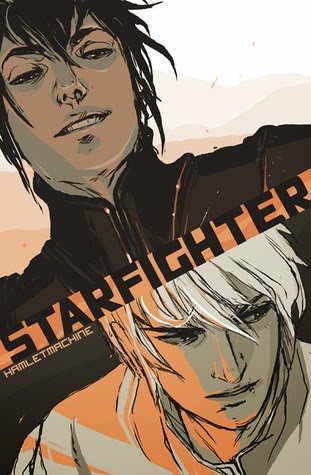 Starfighter: http://www.starfightercomic.com
When it comes to fully understanding the plot, you’ll have to read all the chapters in sequence. Basically, you have a pair of young men who are given the task names–Cain (seme/the fighter) and Abel (uke/the navigator). These men live in outer space and work as a starfighter team. Their ship is the Reliant. Near as I can tell Abel is a virgin homosexual that has an attraction for Cain. He’s introverted and caring–at least he has a conscience. Cain is the local ‘bad boy’ so-to-speak. He’s supposedly the best fighter in the fleet and also rude, impetuous and demanding.

After they receive their assignment, the men argue. Abel’s attracted to Cain, but at the same time disgusted by the man. Abel’s feelings are typical in so many ways–he wants the bad boy, awesome sex, fuck me when I demand, but he’s fearful of the consequences a relationship with Cain could mean. At this point Cain and Abel receive battle orders and after destroying an enemy ship, they hear a distress call from the Tiberius. Abel decides to help though Cain refuses. Luckily they survive and salvage the Tiberius. Again, the men argue. Cain is rightfully pissed that Abel risked their lives. And this is when the bad boy more or less forces himself onto Abel and, is somewhat surprised to find, Abel’s quite willing and, what a bonus, he’s a virgin! The story does continue, but I’ll leave my synopsis were it stands.

Now to the best part…. I love both characters and they do evolve, though subtle. My favourite is Cain. It’ll be interesting to see what happens as the story progresses, whether he develops more of a heart towards Abel, or if he’ll continue to unnerve the guy. Cain comes across as a prick, but I sense underneath he’s capable of better–at least when it concerns Abel. Yes, be a prick in public Cain I love it! But be a little nicer in private.

Hamletmachine does a wonderful job. Her artistry is distinct and addictive. Her characters are charismatic, anatomically correct and definitely likeable. And, the sex is explicit hot! Yes, there is a ‘but’. From an author’s perspective, I will say the dialogue needs editing and the plot could use a touch more depth. Other than that, I give this yaoi four flames and I can’t wait to read the next installment!