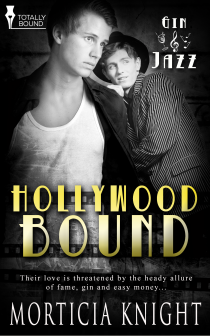 Thanks for having me back again! Gin & Jazz, an M/M romance set in the 1920’s, has been quite a journey for me. Initially, my biggest concern was making sure all of the factual details of the era were correct; food, fashion, slang, cost of goods, transportation, locales, etc. What really ended up speaking to me however were the attitudes towards gay men, and the genuinely scary challenges they faced.

Young Jack Stone, an orphan who was beaten and thrown out of a boy’s home because he was caught with another boy there, has to face the terrors of New York City on his own. That is, until he meets the older and more streetwise Nick. Together, they forge a friendship that eventually turns to love and becomes a borderline hero worship for Jack. If only Nick wasn’t engaged to a woman back in his hometown in Philly. But there have been some stirrings in Nick lately, and everything changes between them eventually.

One of Nick’s original reasons for not acting on his feelings for Jack involves fear. Fear of the unknown, what others might think or do should they find out, the knowledge they would always have to hide. It creates an incredible amount of tension for him, but it also did for me as a writer. It was vital that I remain authentic to what they would both have to face on an ongoing basis. I didn’t want it to be heavy-handed, but there was always that underlying thread – exactly as it would have been if it were happening back then. They could never be completely free of it – no matter what.

While our current times are much better for gay men, it is far from ideal. The Russian Olympics or the recent bills proposing businesses be allowed to refuse service to homosexuals in Kansas, Tennessee, Arizona and South Dakota are disturbing examples.
http://news.yahoo.com/

The following are a few snippets from the four books in the Gin & Jazz series that reference this issue:

From Hollywood Bound (Gin & Jazz 1) Nick struggles with his desire for Jack.

Nick swirled all the way around just in time to see Jack running away. The kid was speedy, and Nick spurred into action. He had no idea where Jack was headed, but he was filled with a sudden terror that if he didn’t make things right, he might not ever see him again. That thought alone filled him with dread, and pushed him to move faster.

Just as Jack rounded a corner into one of the many filthy alleys that cut through the city, Nick caught up to him and slammed him against the wall.

Jack struggled with him, kicking at Nick’s shins, but Nick held Jack fast, grasping his hands above his head and shoving his thigh in between Jack’s legs, giving him no room to get away or strike out at him.

Jack stilled, both of them out of breath from running like crazy men, their chests heaving with their exertion. Nick gazed down at Jack who was being careful to look to the side and not make eye contact. All Nick wanted in that moment was to claim him. To tell Jack that he belonged to him, with him, and nowhere else.

“I hate you,” Jack said softly, still not looking at Nick.

Nick’s heart was breaking, yet he could feel the hard outline of Jack’s dick pressed against his thigh. Jack liked it. He liked having Nick hold him there, restrain him like that. Be rough with him.

Suddenly, Nick used his free hand to turn Jack’s head towards him. Nick pressed his lips against Jack’s and forced his way into his mouth. He explored and probed, enjoying the sweetness of him. It had never felt like this before. The hesitant little pecks he had shared with Penelope had been sterile and cold compared to this glorious heat. He deepened the kiss, sweeping the inside of Jack’s teeth and tongue, memorising every little nuance that was him. His man. His Jack.

Jack had relaxed in Nick’s embrace and was responding to him unreservedly. They were both hard and kissing with such an urgency that Nick knew if they weren’t careful they would end up fucking right there in the alley and risk getting arrested.

He pulled away abruptly, but still held Jack prisoner.

“Not here. We can’t take a chance getting’ caught.”

Jack had tears at the corners of his eyes, and Nick bent down to kiss them gently away.

“There, there, Jacky boy. It’s okay. Everythin’s gonna be okay.” 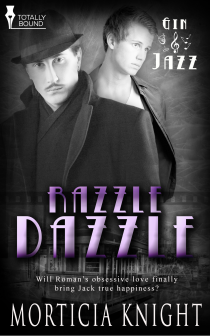 This snippet is from Razzle Dazzle (Gin & Jazz 2) when Jack is on a first date with the dashing silent film star, Roman Pasquale.

“Here’s to our first date, my dear Jack. Thank you for bringing me here.”

Roman waved his drink at Jack and raised his eyebrows. Jack took a quick peek around to see if anyone was looking their way, grabbed his glass and clinked it quickly with Roman’s.
Roman took a swallow and set his soda down, all whilst keeping his eyes on Jack.

He leaned over and whispered, “You know there are many men in the world who have never even had a cock in their mouth, yet still toast one another.”

“Let me worry about whether or not something is safe for us. I know this town better than it knows itself.”

Jack lowered his head a moment. Roman coaxed his chin up with one finger the same way he had earlier.

“I prefer seeing your lovely face rather than the top of your head.”

“I’m sorry, Roman. I guess you never had no one beat you up or turn you away because you liked guys.”
“Really? Who says I haven’t,” Roman said the last part bitterly, and looked away for a moment before turning to meet Jack’s eyes again. Roman’s smile was a little crooked, his eyes hooded with sadness.
“Geez, Roman, I’m so sorry. What happened?”
Roman’s face changed back to his normal above-it-all, slightly smug expression. “Hardly good table conversation on such a glorious evening. Tell me Jack, what brought you here to Hollywood so that the fates could intervene and bring us together?” 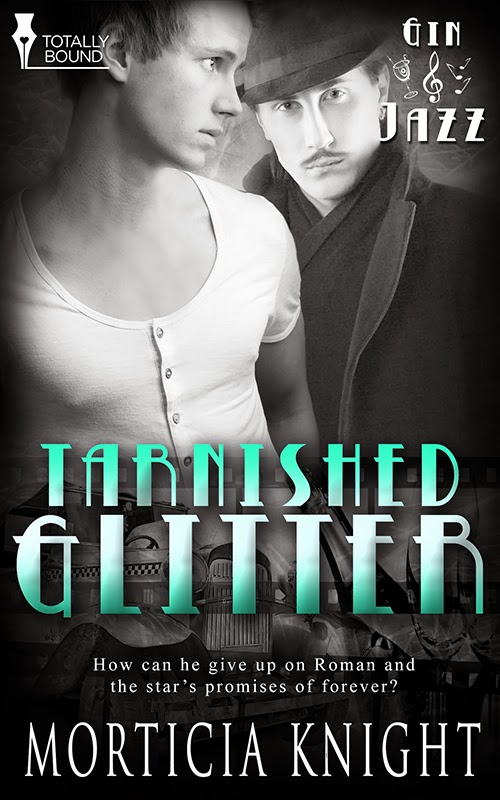 Held fast in Roman’s embrace, Jack felt closer to him than ever before. For once, Roman was just a man in love. Roman wasn’t trying to fuck, impress or control him.

“I need to tell you something.” Roman kept his tight hold on Jack, so he couldn’t see the look on Roman’s face. He stroked Jack softly as he spoke. “The studio heads called me in today for a meeting. They weren’t happy that I came in late, and that I was so…ill.”

“But that’s not your fault, Roman…”

“Shh, my love. Let me finish this. They also told me that we need to be more discreet. That we can’t be together on the set all the time.” Roman chuckled bitterly. “As a matter of fact, we are barred from one another’s films until further notice. So, even though we work at the same establishment, it would appear that the powers that be have decreed we are to remain separate.”

Jack didn’t dare admit to Roman that he thought it was a good idea.

“In addition,“ Roman continued, “from now on when we go to public places, we need to have dates. As in two women with us at all times. We need to be respectable.” Roman sniffed his disapproval. “Ridiculous. Now I am to be forced to spend my time with people I care nothing about.” He hugged Jack to him. “When all I care about is you.”

That part of it seemed rather extreme to Jack.

Roman grunted. “I’m afraid, my dear Jack, that they most certainly can. The morals clause that both you and I signed means that they can destroy us at will. Hollywood giveth, then taketh away.”

“I don’t understand. They’ve had parties here, they know all about us. Why now?”

“I hate it too. But I suppose we have been too obvious about it. I never dreamed that… Well anyway, I can’t—we can’t—lose our contracts. What would we do?”

Jack wanted to tell Roman that none of that mattered. That the only important thing was that they were together. But Jack couldn’t imagine Roman without all of his riches and fame any more than he could imagine the lawn turning purple. 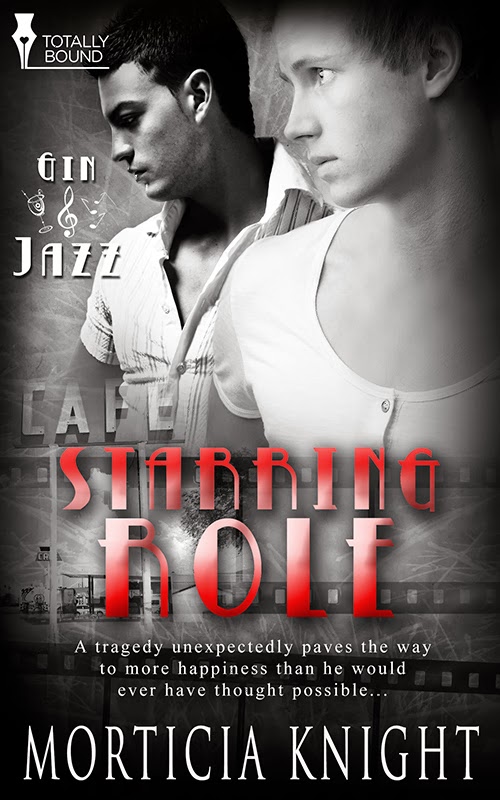 And finally, from Starring Role (Gin & Jazz 4) Nick and Jack are at an outdoor café, discussing their future.

Nick gritted his teeth. If two other men hadn’t already taken the place of the couple who had been eating when they’d arrived, he would’ve grabbed Jack and crushed him in his arms. He hated having to hold back. Now that Jack was near him again, all he wanted to do was touch him.

We need to spend a few days in our room and not leave.

Nick scooted as close as he dared and whispered to Jack, “Listen to me, Jacky boy. I think it’s a great idea, the whole thing. I just wasn’t prepared for it. Why don’t you tell me about everythin’, and we can start plannin’.”

Jack opened his arms, and Nick shook his head. Jack lowered his chin, and Nick whispered right next to his ear, “You can show me how happy you are later. When we’re alone.”

The Gin & Jazz series is best read from the beginning to be able to follow all of the ups and downs of Jack’s journey. Here are the links to Hollywood Bound, (Gin & Jazz 1):

Thanks for the great excerpts, Morticia! I wish you the best of success! Blak Rayne
Posted by Blak Rayne Books Blog at 10:30 PM