Welcome to BRB, everyone! I hope your Christmas was as enjoyable as mine. We had family in from out of town and I didn't have to cook, which made the food taste even better. As you probably noticed, I didn't bother to post anything for most of last week. With Christmas it seemed inconsequential. Who has time to read a blog when they're busy eating and making merry? Anyway, along with author interviews, promos, and other tidbits throughout January and February, I will post a few favourites of mine, yaoi favs that is. I have ten that I consider to be some of the best yaoi I've read. Whether you agree remains to be seen. 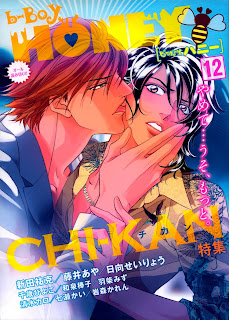 Starting With a Kiss

I can't say that the story hasn't been done, or that the artistic style isn't familiar, but what I can tell you...the characters are saucy, salacious and downright sexy! You've got to love a yaoi that delivers the goods and gorgeous leading men in spades.

A while back I read, Starting With a Kiss (Kiss Ariki), story and art by Youka Nitta. Other manga by the same author that I've thoroughly enjoyed are Haru wo Daiteita (Embracing Love) and The Prime Minister's Secret Diplomacy. Known for her sexy, black haired characters and plots that are almost always yakuza based, I can't resist sneaking a peak at her website at least once a month to see what's new.
When a gang feud erupts, the son of a yakuza boss, Tohru, is exiled on a deserted island to keep him out of harms way. Tohru is hotheaded by nature and angry when he can't join the fight, and is forced to spend his time with Mutsumi, the son of the gang's second in command.
Mutsumi and Tohru are about as opposite in personality as anyone can be. Mutsumi is serious about college and where his life will lead. Tohru, on the other hand, comes across as a very angry and confused man. He doesn't seem the type who will eventually take over his father's position as the head of family business. But, regardless of the personality clash, the longer the men spend time together on their private island, the more it seems Mutsumi has feelings for Tohru, and he's willing to take his place in the ranks provided Tohru will become his lover and blood brother.
As with most of Ms. Nitta's manga there's a twist to Starting With a Kiss, the sex was frequent and deliciously smutty, and the art visually stunning, but, and this is a small but, I found the dialogue between characters choppy at times. This isn't to say that the whole 'lost in translation' thing posed a huge problem; though I did reread certain sections to make sure I understood the events clearly. 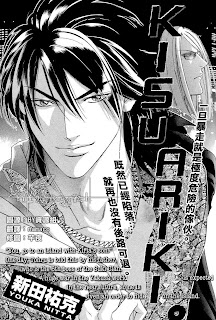 And, I have another confession to make. Even though Mutsumi and Tohru were beautiful characters I thought their fathers, in their youth, were sexier. I know it sounds strange, and I usually never mention the side or back-story characters, but in this case I'd love it if Ms. Nitta dedicated a manga just to them. *drools*
So, here's my rating, five flames and/or five stars. The characters are beautiful, the sex hot, and the story interesting. :)
Happy Yaoi Hunting!
Blak Rayne
http://www.blakrayneblog.com
Posted by Blak Rayne Books Blog at 10:27 PM