Romance was my introduction to Shakespeare. Shakespeare was my introduction to romance. And my introduction to both of them was Saturday morning cartoons. Yup, someone with a huge amount of awesome had the idea to take Shakespeare's kid-friendly plays, and make them into half-hour animated shows. Nearly 20 years later, I still have a clear memory of Rosalind, dressed up as a boy, leading her would-be suitor through the strangest courtship ever. “Woo me, as if I was your Rosalind” she says, and he, thinking his new (male) friend is teaching him how to woo a woman, does.

Those were tragedies. I'm betting is was the Victorians and their 'romanctic movement' in the arts that decided those were supposed to be romances—they were big on young lovers dying tragically. When Shakespeare wrote romance, he stuck to the same rule we do—happily ever after or it doesn't count.

Unless you happen to be a fan of Shakespeare, you might never have seen his romances. The only one that's had any popular distribution in the past few decades is Midsummer Night's Dream. Twelfth Night (or What You Will), As You Like It, All's Well that Ends Well...sometimes I think Shakespeare had a rule that the names of his romances had to be incomprehensible and interchangeable. Which is probably part of why we don't see them often. Can you Hollywood trying to come up with a marketing plan for something called As You Like It?

Shakespearean romance has two tropes that make it stand out from the modern romance genre.

How many weddings???
Shakespeare never wrote a romance about just one couple. Sure, he had protagonists that the plot centered around. But he surrounded them were at least two other couples (and sometimes more), all of whom would end up in wedded bliss (or about to be in wedded bliss) at the end of the play. Twelfth Night is a great example of this. In the last scene, Sebastian and Olivia are engaged (or just married depending on the whim of the director—the dialog is vague), Fabian announces that Sir Toby and Martha have just been married, and Viola finally admits to Count Orsino that she's a woman and in love with him, and they get engaged. Now, let me point out that the entire play only had three female characters. And by the end, every single one of them was married (or about to be).

I Love Y—
While there are exceptions, the general pattern of the modern romance novel is to throw the happy couple into a relationship early and keep them together, to the point that they may not even interact with anyone else, until they've sorted out their problems, saved each other and declared their happily ever afters. In fact, the crisis in many modern romances often comes when the pair, having been stuck with each other for so long, are suddenly separated by an outside force. Whether they like it or not (and they often aren't sure) the relationship starts early in the book, and continues throughout.

Shakespeare? He had a different way of messing with his characters. They fall in love immediately and know they want to be together forever—and spend the entire play unable to actually start a relationship. Often, they are pining away right under each other's noses (Shakespeare loved his crossdressers.) There might be a wicked father in the way, a pledge of honor, or a manic mix up. But something will keep the would-be lovers trapped in a realm of “look, but don't touch!” sure their love can never be...until the last five minutes of the play, of course!

I never set out to write a Shakespearean romance. I just had an idea for a story and some fun characters I wanted to play around with. But I was reading Shakespeare before I'd ever heard of Harlequin, and I guess early childhood imprinting really is a thing. Cause as much as I wanted to get Mattin and Jahlene together, they had other ideas. Mix ups? Check. Misunderstandings? Check. A hidden enemy deliberately sabotaging them? Check.

And let's not forget the romantic insanity. Granted, the last chapter only has two new relationships, but the rest of the book! Well, I'll let you find that out for yourself.

I'll be honest—if you pick up Glamourhai expecting a typical romance, you might be disappointed. But there's lots of routes to happily ever after, and if your interested in something different, you'll find it here.

And if you're interested in checking out the original Shakespearean romances, may I suggest you start with my favorite: Twelfth Night. 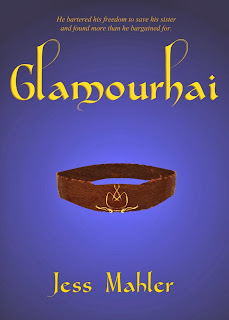 When the fae lord, Oeloeff, takes his sister, Mattin seeks out Countess Jahlene n'Erida, a fae noble who is Oeloff's enemy, and begs her to help free his sister. In return for her help, he offers the only thing he has--himself. Lady Jahlene accepts Mattin's offer, and he finds himself an initiate of a strange world where pain is pleasure, cruelty is love, and nothing is as it seems.

Mattin hates being a slave, almost as much as he hates and fears the fae. But as he learns more about Jahlene, he finds himself drawn to her, and her sadistic pleasures. As they race to prepare their trap for Oeloff, Mattin fights to reconcile his desires with his fears. Until he makes a mistake that costs him everything...

www.amazon.com/Glamourhai
Thanks for the great post, Jess! All the best. :D Blak Rayne
Posted by Blak Rayne Books Blog at 10:00 PM