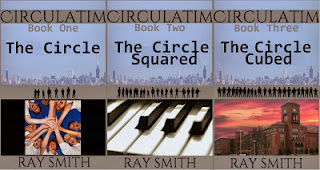 Circulatim Trilogy - Book One: The Circle
By Ray Smith
Blurb:
"Your story should come with a Surgeon General's warning: This product may be harmful to your health; it may cause lack of sleep, mood swings, sudden verbal outbursts, long periods of inactivity, and result in withdrawal symptoms."
Excerpt:
I woke spooned together with Toby in front of me. I remembered our last words to each other before falling asleep, spoken face to face and intimately together. We had never said it last summer, not directly. My stomach quivered and my heart fluttered, just as they had the first time I had seen Toby in the park a year ago.
Those fond memories, and the ones of last night, warmed my heart almost to overflowing as I snuggled up to him. I felt my morning wood nuzzle in between his cheeks.
He flew off the bed with an incoherent shout, banging into the night stand and nearly falling off his feet. He brushed at himself as if here were covered with something painful and shouted, "Off!" several times.
I was shocked! Not only at Toby's reaction and sudden movements, but at Toby's body. It was early morning, and the bright light of day upon his total nudity revealed how thin he was. His ribs and pelvis bones were nearly poking through his skin. His head seemed too big for his thin body and I wondered how he could hold it upright.
His shocking behavior worried me the most; Toby had never done anything like that last summer. We had woken each other the same way many times, in either position, and nothing like this had ever happened before.
I suddenly remembered Toby's request last night, to not let my fingers go back there, and I suddenly felt so guilty.
"What is it, Toby? What's wrong?" I asked, sitting up on the bed, naked and not caring, reaching out to touch him.
He was shivering and pale, and looked frightened to death. He wrapped his arms around himself as if he were cold as he sat down on the side of the bed. I moved up behind him, my erection forgotten, and put my arms tightly around him after noting the visible backbones, the ribs, and shoulder blades. The few muscles stood out like swollen spots across his back as he sat on the edge of the bed.
I pulled the blanket over us, then placed my chin on Toby's left shoulder, like last summer. But now it was a bony, bumpy place that almost felt foreign.
I kissed his earlobe from behind and said softly, "Hey, come on. I ain't seen you in a while, but I can tell something's wrong. You have some kind of freaky nightmare, and tell me it happens every night like it's nothing! Now you jump out of bed like it's on fire. What's the deal?"
My guts were twisted so tightly that it was hard to breathe. Just moments ago I had been as happy and content as I had ever been, now suddenly I was as worried and concerned as I had ever been.
"Toby, you have to talk about it. Until you do, it'll own you."
Toby cried for long minutes before he finally began to explain. By that time I had joined him in tears, made even worse because I didn't understand why. Not yet.
"My gym teacher. He caught me smokin' a doob after school. He, he, made me go to his office with him. He said I was in 'nough trouble already, and if I didn't do better an' not miss any days, I'd flunk gym. If ya flunk gym, ya flunk the whole grade!
"He told me I'd be a junior again next year even if he didn't tell anyone 'bout the pot 'cause my grades were so bad. But, he made me stand up an', he, he, searched me. He did more 'n search me. He felt me up! Big time! He found the baggie 'n papers in my ... where I hid 'em," Toby paused as he cried too hard to talk.
I knew where he hid his baggie and papers, so I knew how thoroughly his teacher had searched him.
"He made me take my pants down."
Toby's voice wavered as he sobbed deeply again.
I hugged him tighter, my guts heaving involuntarily, tears falling on Toby's back. I dreaded, and knew, what was coming next.