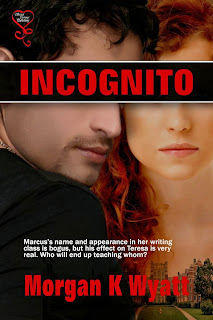 Incognito
Blurb:
Teresa Gallagher did not expect to become an old maid school teacher at the great age of thirty-six, but she does teach and is single. She also didn’t expect a gorgeous stranger to slip into her university writing class. The man claims a historical name as his own and an interest in writing. She has high school students who lie better.
Marcus Aronson specializes in small colleges with problems. His company usually gobbles up the college, lays off people and takes over administration. Jefferson is his latest project. He slips into a classroom to check out if a favorite professor might be the embezzler. What he finds instead is a passionate woman hiding behind a button up exterior. Someone needs to release Teresa from her inhibitions and that someone would be him. There were rules about mixing business and pleasure. Rules he intended to break.
Excerpt:
Marcus decided her expression wasn’t overly welcoming. Had he read the kiss wrong or was the problem that he shouldn’t know where she lived? Only a nosy person or someone with access to personnel records would know that. Still, her cutoff shorts were hot. What did that shirt say? He read the words aloud until she covered it with her hands. “Straight men…” Wait, what did she cover up?
He walked closer until they were nose to nose. The coconut-scented suntan oil teased his nostrils. Visions of tropical nights spent under a full moon, rolling around with Teresa’s long legs wrapped around him filled his mind's eye. Speaking of legs, he glanced down to the limbs in question. Just as long and as magnificent as he imagined them that made it a double shame to cover them up. Still, he knew teen boys needed little to start erotic fantasies about their teachers. Why give them more fodder?
Her lips held onto the circle of surprise, which made him think of other ways he could shock those delectable lips. The slight hush of the pool filter, children playing in the distance, plus a tinny muffled dog barking registered in a corner of his mind. Two feminine hands held tightly under her breasts owned the majority of his attention. Whatever word she might be trying to hide with her hands did not quite cover the arrow pointing downward to an interesting zone.
“My sister-in-law’s a jokester. The shirt is a souvenir from her San Francisco trip.” She said the words breathlessly, while staring up in his eyes.
Placing his larger hands over hers, he deliberately wrapped his fingers around hers with the intention of lifting her hands off the obvious inappropriate word. What he didn’t count on was her determination to keep the word covered or their precarious perch at the edge of the pool.
“C’mon,” he cajoled when she pressed her hands even tighter to her midriff as if she might be attempting CPR on herself.
She shook her head. “Nope, I’d rather be shirtless than have you read my humiliating shirt.”
Shirtless? Oh yes, he could go for that. “Sounds good to me.” His hands dove to the bottom of her shirt to help her remove it. A forceful push sent him wind-milling into the pool, clothes, shoes, sunglasses, and damn it, cell phone, and all.
She stood peering into the pool, her body quivering with suppressed laughter. He fished out his cellphone laid it on the edge of the pool. Her expression told him she couldn’t believe her eyes as he pulled out his wallet, his keys, and a waterlogged package of mints. He reached under the water, pulled off one, then another topsider and flung it onto the cement.
“What are you doing?” She stared at the growing pile.
He smiled at her very interested mien. The woman ate him up with her eyes. Good. He unbuttoned the two buttons on his polo and pulled it over his head. He wrung out his wet shirt, twirled it over his head like a stripper, and pitched in her direction, hitting her with a satisfying smack.
“Looks like someone invited me in for a swim.”
Her mouth opened and closed with no words coming out.
“Unfortunately, I forgot my suit so I have to improvise.” He slipped the belt from his khakis and let it float on top of the water like some mythical serpent. Teresa’s eyes followed as if it were Nessie. To think he took time considering what would be the right thing to wear only to end up drenched. Business casual did not serve him well.
Her eyes stayed glued to him as he reached for his waistband. “I’ll be right back,” she announced as she darted to the patio door. “Don’t go anywhere.”
Purchase Link: http://www.amazon.com/Incognito
Publisher Link: www.secretcravingspublishing.com
Posted by Blak Rayne Books Blog at 11:00 PM