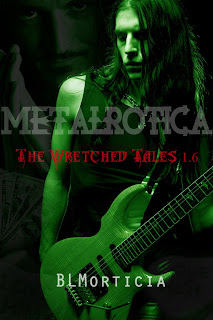 My Favorite Word
BLMorticia
Greetings peeps. It’s been a minute since I visited Blak’s place but hey, I’m here now with another blog post. Hmm, you see that title? What is my favorite word? Well other than sex, men, and music, what could it be? Ooh I know, a word I use a lot when I write; the word FUCK!
Yeah I do use that quite a bit. *grins* I even counted almost 100 fucks in my latest tale, Wretched 1.6. Can you imagine? Well hell, what can I say, I love to swear. Fuck is a really great fucking word. It can mean so many things. Yeah, yeah it’s real derogatory but a long fucking time ago it was acceptable to say the work fuck.
Need proof? Well, in Wikipedia under the word fuck, it talks about it going as far back as the 15th century from a poem with a mixture of Latin and English called Flies, Fleas and Friars. One of the lines translates to the sentence; they are not in heaven because they fuck wives of Ely.
Wow. *eyes widen* Can you imagine the use of such a great word going that far back? Besides that, think of what else the word derives from; German flikken, to fuck, Dutch fokken, to breed, Norwegian fukka to copulate. Just a few examples of where this might have come from and that brings us to modern day. Fuck, a derogatory word meaning having sex but we also say it when we’re pissed off, we add it to sentences like, get out of my fucking face, bitch. And then we might even use it to be cool. When something makes us happy, we say, fuck yeah! Oh I fucking hate that phrase. *laughs*
Yeah, you didn’t believe that it had some importance right? Well hell, everything comes from something and our great forefathers were usually the ones responsible so, heck, keep on fucking using the word fuck if you are so fucking inclined.
This has been a fucking hilarious and informational post by your resident bad girl, BLMorticia.
All Romance Smashwords
Metalrotica-The Wretched Tales 1.6
Blurb:
Corey’s dilemmas continue with just about everyone wanting to get in his pants. Bryan, his drummer, Trey from Burnt Ash, Wayne from Omerta and his lead singer, Nicolai Zander but Corey desires the pretty Miss Deborah Meyer to be his one and only. Unfortunately, Nicolai is standing in the way of his happiness and informs him if he doesn’t succumb to his charms, he’ll tell everyone about his sexploits with Jake in Detroit.

Add on his lack of sleep, his growing hatred for guitarist Allen, as well as his growing affection for Trey to his list of issues to deal with. Just how will he stay sane amongst the craziness and convince Deborah to be his main squeeze?

This is the final part of Volume One of the Wretched Tales
Excerpt: PG
“Corey? Corey mother fuckin’ Patrick, where the hell do ya think you’re going?” Nicolai’s bluish-greens bore into me, stopping me in my tracks. I shifted my head real fast so I wouldn’t melt into a puddle of goo just looking at his hot ass still clad in the leather from last night’s performance.
“To my bunk, man. You and Bryan woke me up out of a good sleep with all the freaking noise. I need my beauty rest you know.”
Nicolai laughed, stroking his brown goatee, plopping his legs atop the table. “Yeah you sure do my lovely cocksucker. You’re real pretty too and I’d like you to stay that way.
“Whatever, man. Keep your faggot ways over there, okay? I told you, I wasn’t into that.” Wanting to get away, my brows furrowed and I took another step in the direction of the exit.
“Man, stop with the act, all right? I know what you like. You like me, I like you, and hell I know Bryan likes it too. That little butt muncher has it bad. He even had the nerve to turn me down. No one turns the king down, Corey. After a while you won’t either.” Nicolai smiled smug and crossed his arms over his chest, only slightly covering the ink, and the small patches of hair.
God why did this man have to be so hot? He was however the subject of my wild dreams this morning; him laying down in front of me, with his ass up and on all fours. There’s nothing I’d want more than Nicolai taking every inch of me right now while I rode him from behind.
Giddy up little doggy!
Trying my best to keep my composure, I clenched my hands at my sides and nibbled on my bottom lip. No way would I allow Nicolai to see me break. “Not sure what you’re saying man. I think it’s a figment of that fucked up brain of yours. You should lay off the drugs…” I spun on my heel and left out, not saying anything more while he spewed insults at me. What a fucking douche he is but I had the hots for him. Really bad and no, they weren’t going anywhere anytime soon.
Unless?
Unless I could get my hands on some Deborah Meyer and ask her to be my woman or should I go for the jugular and tell her my story, begging her to be all mine and not to out me? Damn, the choices of either happening were slim to none but it was better than being Nicolai’s fuck toy.
But can I have it for one night?
Yeah can I just have him for one evening and get the shit out of my system? Perhaps if I experienced it I’d be able to forget but then again, it seemed like Nicolai wasn’t willing to give up. Seemingly, my lovable asshole demanded me and him would be some kind of thing on the side and I really didn’t want that long term. Besides, he had a wife and kids too. Who’d want to be in a situation like that on an everyday basis?
Exhausted from the brain power I’d been using, I dropped on my bunk and lay my head back on the semi-soft pillow, wishing the American leg of this tour would come to a close sooner than later. At the moment we were caught in a ten shows in thirteen nights deal and our first extended break wouldn’t happen until we hit Iowa. Don’t get me wrong I loved playing for the crowds, meeting the fans, etc., but the mental strain of keeping secrets and having people wanting my dick was starting to get to me. At first it might’ve seemed great to be desired by so many people but I wondered if it was really all worth it.
BLMorticia is currently a published writer with Naughty Nights Press and Rebel Ink Press. She entertains her readers with hot and smexy sex, humor, and lots of swear words. She attempts to incorporate metal music or the military in most of her works. Nothin’ sexier than metalheads or military servicemen and women! She also writes a monthly column on Blak Rayne Books and blogs on the First Thursday of the month at NNP Blog. For more info, please visit, Erotica With Snark
Thanks for the great post, BL! All the best. :) Blak
Posted by Blak Rayne Books Blog at 11:00 PM