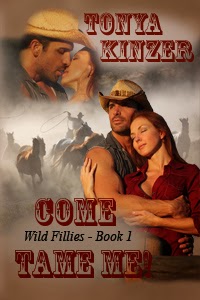 Come Tame Me, book one, Wild Fillies series
Blurb:
Cassandra's sharp shooting skills surpass even the men who compete and those same skills come in handy when she's presented with the challenge of taking back her father's ranch. She's been gone ten years and knows the men will think she's just a high-maintenance female from back east. They'll all have a surprise when she starts giving the orders and takes back what belongs to her!
But she also worries about the relationship she'd had with Gabe ten years ago and knows they will see each other. Can she forgive him and start over to work on re-establishing what they had? Or will she hire a new manager for the ranch?
Excerpt:
She so wanted to stay mad at him for what had happened with that woman...the same one she’d seen in the brewery, but she couldn’t forget how tender he could be when they were together. He’d loved her; she knew that...and her gut told her to forget about the incident and move on.
“I’ve missed you.”
The sound of his deep voice melted her resolve all too quickly. Gently biting her lower lip, she met his dark eyes. He set his cup on the side table.
“You told me when you left to never try contacting you...ever! That’s the hardest thing in my life I’ve ever had to do.” Gabe leaned back in his chair and stretched his legs. “I’m sorry for the way things got left between us. I know I screwed up. What’s done is done...but what we had was good, Cass. I’ve held onto hope for ten years. I knew one day you’d have to visit here.”
She had so many questions. “And where’s that woman now?” Anger rose in her belly and she easily envisioned the incident in her mind. She hadn’t meant to blurt out that question but it’s the one that bothered her most even though she’d seen her kiss Buck Johnson.
Gabe tapped the arm of the log chair but kept his gaze on her. “She stayed with your father for about five years. When he fired Buck, she eventually moved in with him. He’s got a place about ten miles away and he’s still pissed at your father. They’ve had an ongoing feud between them ever since.”
Crossing her legs and swinging her foot, Cassi wondered if he’d tell her the truth with her next question. “When was the last time you saw her?” She hated being nosy but she had to know.
Without losing eye contact, Gabe leaned forward and rested his elbows on his knees. “I’ve not been with her since the night you and your mother walked into the bunkhouse. She and your father had the relationship until she got bored with him...and moved on.”
She watched Gabe closely for a sign of lies but saw none. Gabe never flinched nor looked away. “I’m sorry I told you to never contact me. I’ve tried to forget what we had. I made myself believe you’d found a woman to make you happy...since I must not have done that for you.” A tear slipped down her cheek and made her mad that she’d let him see how much he affected her.
“My gawd, Cassi...I’ve thought of no one but you for ten years! Assuming you wanted nothing more to do with me, I didn’t try to find you.”
Through tear-filled eyes, Cassi admired Gabe, wishing things didn’t have to be so difficult. This was really more her fault for not reaching out. He’d changed for the better, filling out his broad shoulders and his upper arms. Could she let him hold her without wondering if he wished she were someone else? Looking away, Cassi wiped her cheek.
This was too hard.
They would have to get past so many hurdles...but they did have time on their side.
Gabe stood and walked toward the steps. “If you decide to fire me as manager, I’ll understand.”
Cassi gasped and jumped up. “Gabe! That’s not what I want...”
He turned back and the hurt in his eyes stabbed her heart. “I don’t know what you want, Cass.”