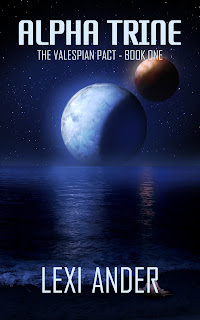 Alpha Trine
The Valespian Pact-Book One
Sci-fi/Fantasy
By Lexi Ander
Blurb:
The sole survivor on a science vessel adrift in deep space, Zeus was adopted by the Emperor and Empress of the Mar'Sani, though he is both human and blind, and seen by most as unfit to join the royal family. Though they were able to repair his vision, Zeus does not trust his eyes and the nobles of his parents' court refuse to ever trust a frail human.  Dargon Kal-Turak, along with his symbiote and lover Alpha, command one of the most dangerous ships in the stars. Narrowly escaping a trap, they dock in a space port to make repairs, but find that the Psonics hunting them are closing in fast. In desperation they kidnap the port Master Mechanic, unaware that the man they've brought on board is more than he seems, and will bring far more upheaval to their ship, their lives, and the stars than any of them could have imagined.
Excerpt:
"I almost forgot your promised kiss," Zeus said against his lips before a warm, soft tongue darted out and ran over Dargon's bottom lip.
Dargon instantly opened his mouth. He had never been kissed before, by any of his lovers, and he marveled at the feel of the deft tongue against his. Zeus tasted like nothing he had ever encountered, and he shared the experience with Alpha, who began to hum and rub excitedly against Dargon. Zeus moved his lips against Dargon's, and Dargon mimicked the action.
Hands cupped and stroked his face, pulled on his braid, then traced the line of his outer ears. His back arched from feathered touches over such sensitive places, the thrumming started up in his chest, and before he knew it, Dargon was lying back on his elbows with Zeus straddling his hips, trapping his sex in the cleft of Zeus's bare ass. Zeus consumed him with one kiss that seemed to go on forever. Dargon did not want it to stop. Alpha moved against his skin, sharing in his pleasure. Zeus's hands were everywhere, touching, exploring. Dargon pushed against Zeus, his slick cock riding in the perfect space, as if Zeus's body had been made for him.
Zeus grabbed Dargon's hands, placed them on his hips. "Touch me, please," Zeus begged in a low voice.
Purchase Link:
http://www.lessthanthreepress.com
Publisher Link:
http://www.lessthanthreepress.com/books/
Author Website:
www.lexiander.com
Posted by Blak Rayne Books Blog at 11:00 PM