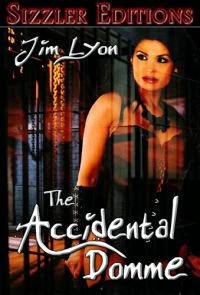 The Accidental Domme
Blurb:
The Accidental Domme follows the events that propel a lesbian personal trainer into the BDSM universe and a romance with a kinky and submissive pop star. In a weak moment in-between lovers, Wendy allows her longtime friend Dave to cajole her into helping him indulge his chastity fetish by becoming his key holder. Neither of them could have predicted that such a seemingly innocuous action would lead to Wendy discovering her propensity for BDSM and a career as a no-nonsense personal trainer for submissive women and pony boys/girls. This tale also features Dave's sojourn into femdom and his relationship with Denise, the kinky owner of a piercing parlor and a tricked-out Harley.
Excerpt:
The young black woman appeared a little ill at ease as she sat in a chair across from Wendy explaining why she was there. With the exception of being black, she seemed about like Wendy imagined she might from the list of things to concentrate on provided by Suzanne - unfocused, out of shape, overweight, passive. But Nadine was also pretty and smart, and she was very motivated to please her new mistress.
"Suzanne gave me a list of the things that she'd particularly like me to work on, so I'm ready to get started if you are," Wendy told her.
Nadine smiled nervously and nodded.
"Okay then, let's begin by having you take off all your clothes so I can see what I've got to work with."
After a brief hesitation Nadine stood and timidly, awkwardly started removing her clothes. Wendy enjoyed watching her embarrassment at undressing on command in front of a stranger. She also admired Nadine's ebony body as it was gradually revealed to her striptease style.
When the young woman was completely naked, Wendy walked around her slowly, inspecting her body perhaps more closely and leisurely than absolutely necessary. She noted that her thighs were a little flabby and that she had a generous amount of baby fat distributed here and there. Eyeing her like a sculptor might a good cut of stone, Wendy saw the potential that her body had.
Wendy spent several minutes taking Nadine's vital signs, recording her height and weight, and measuring various parts of her body. When she had all the data she needed she implored Nadine to: "Please kneel with your head down and your ass in the air."
With a questioning look on her face Nadine did as she was asked. Wendy went to her desk and retrieved a medium-size butt plug and a tube of Astroglide then returned to Nadine's side and stood over her.
"Your mistress wants you opened up back here," she said touching Nadine's rear entrance with the tip of her finger.
There was just the slightest flinch at her touch, but Nadine remained silent.
"Just relax. Before you know it you'll become quite accustomed to having a constant companion there."
Wendy slathered Nadine's rear passage with the lubricant and slowly inserted the plug into its new home, pushing it in an inch or so at a time, pausing, then continuing on in this fashion until it was completely seated, enjoying the task thoroughly. When she was done she directed Nadine to stand and follow her to the adjoining room and climb onto a state-of-the-art treadmill.
"You're going for a walk in just a minute, but first I need to get you ready."
Wendy fitted a belt on Nadine, with a strap running between her legs front to back such that a battery-operated vibrator was positioned flush against her clitoris. She instructed her to grab the handles and keep up with the machine then in quick succession activated the vibrator and the treadmill.
Nadine somehow managed to adjust to walking at a brisk pace with a butt plug inside her while her clitoris was being stimulated mercilessly. The competing sensations induced sublimely submissive fantasies and a burning wetness between her thighs. Before Nadine had an opportunity to luxuriate in her forced arousal Wendy began slapping her ass with a Scottish tawse.
The initial blows were gentle but soon there was a sting to them. The severity of the lashes became progressively harsher until they bordered on being vicious. Between the plug's movement inside her with each step, the incessant vibrating on her clitoris, and the rhythmic stinging on her ass, Nadine's nervous system was on overload. Gamely she kept on walking, nearly falling a couple times as disturbingly nasty orgasms rocked her to the core, until four miles later Wendy shut the treadmill and vibrator off and led her to a bench where she was allowed to recuperate briefly before continuing with the workout.
Nadine closed her eyes and mentally replayed the scenario she had just experienced, her body pulsating with the carryover pain and pleasure. When her thoughts started to settle she conjured an image of her mistress - so strong, beautiful, loving and demanding. She resolved again to endure whatever was required to please her mistress and serve her desires.