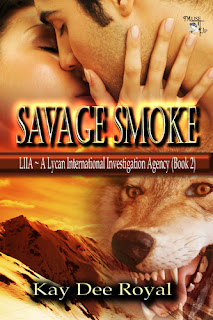 Savage Smoke – Book 2
Lycan International Investigation Agency Series
By Kay Dee Royal
Blurb:
Chance and his LIIA pack of agents search for rogue Lycan mastermind, Smoke, kidnapper of Lindsey and fifteen other human women he plans to use for procreating his own army.
Trevor, Chance’s right-hand Lycan, wants his mate back, but believes she’s fallen for her captor. Lindsey loves Trevor but believes he’s given up on her.
Will Trevor come around in time to rescue Lindsey and save her from shifting into Smoke’s pack, and will she even want back with Trevor after spending so long apart?
Excerpt:
So far, Smoke didn’t share Lindsey with other males, but she was aware of the orgies inside the central building. She heard a few women talk of them. Some even liked them, being surrounded by hard-bodied men hung like rocket launchers. Those women went at it without the use of the stimulation drug Smoke used on everyone else.
She was used to the little needle pricks and welcomed them. It made acting the part with Smoke so much easier, believing in her heart Trevor made love to her, but guarding that fact from Smoke by holding Trevor’s name in the secret place, locked safely away.
Lindsey understood some of the sexual attraction. She had that once, but she couldn’t go there in her mind. Smoke searched her thoughts almost daily and always found if she’d tapped into any memory nuggets of people she loved. He possessed psychic abilities others didn’t. Already, the thoughts of Trevor that had emerged she’d need to bury before Smoke returned.
If an orgy ensued during their pack meeting, Smoke would be preoccupied for a good while. She reached her arm underneath the mattress, where a few weeks ago she saw Smoke slide his journal. Lindsey had fallen asleep with her back to the fireplace. A crack of thunder wakened her in time to witness Smoke closing a journal and placing it beneath the mattress they shared.
Lindsey touched its leather cover, wrapped her fingers around it, and hauled it out.
Purchase Link: Amazon; Muse It UpPublishing Store
Publisher Link: Muse It UpPublishing Store
Website Link: http://kaydeeroyal.wix.com/kaydeeroyal