Lust? Or Love? Sounds like a really obvious choice, doesn't it? But I'm not sure if it is. The laws of magnetism dictate that every human being regardless of gender, sexual preference, or any other stereotypical label you can think of, will one day find himself or herself attracted to someone. Quite simply, they will experience lust. After all, lust can and does usually pave the way for a stronger emotional attachment, such as love. So, in other words, lust begets love.
Do you remember that stupid rhyme from childhood?
Jerry and Michael sitting in a tree. K-i-s-s-i-n-g. First comes love then comes marriage then comes Anthony in the baby carriage.
When it comes to novels, and I'm directing the question towards gay erotica or gay erotic romance in particular, which do you prefer to read? Do you like characters that have no scruples, and screw every man they meet? Or do you want the characters to have a heart? The reason I ask is because I'm noticing a trend towards the latter, and I'm beginning to wonder if it's the reader's way of saying they secretly prefer the romance. As for myself, I like a mix of the two, peaches 'n' cream, yummy. :)
I've added a new excerpt from Older The Better. It's dirty, but what the heck. We all need something dirty to read once in a while. Older The Better will be published next week! I hope you enjoy the naughty expert. Have a great weekend, everyone! 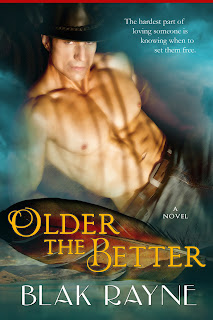 ’The hardest part of loving someone is knowing when to set them free.’
Blurb:
Indiscriminate sex with strangers is the only pleasure Charles has left in life. No matter how much he wants a relationship, the memories of a painful break-up during his youth won’t allow him to commit—until a friend persuades him to confront the past—to confront the man who dumped him.
Taking his friend’s advice, Charles returns home, in the hopes of rekindling the romance with the man he lost. But, his father’s religious views and the backwater community he grew up in aren’t so understanding when it comes to same-sex relationships and, to his disillusionment, neither is the man he’s returned for.
Excerpt:
They’d worked all morning, picking apricots. He loaded a box in the back of a wagon hitched to the tractor and wiped a sleeve across his brow. Charles was halfway up a ladder, plucking fruit from the upper section of a tree. He wasn’t wearing a shirt and his flesh had taken on a red tint in the sun. Malcolm’s thoughts might have been exaggerated from the heat, regardless, Todd had gone into the village, and he had an ache needing to be satisfied.
He dragged Charles by the hand over to the ‘56 Ford, and with shaking limbs, Charles pushed either side of his cotton Y fronts and jeans until they slid down to bunch about his ankles. At that moment, nothing else mattered. Charles surrendered to him, his legs bowed as he leaned forward to rest both forearms on the hood of the truck. Malcolm had no intention of resisting the firm youthfulness of the body in front of him—the skin painted a striking bronze, similar to the ribbons of mineral rich soil in the mountainside, and the long, raven hair; Charles’ willingness gave him a boner and every excuse.
“Just do me.” His forehead rocked on the hood as he fondled his own cock.
“I can make you feel so good.” Malcolm ran a pair of strong fingers inside the crack of his ass.
“Fuck me then,” Charles whispered.
“No fucking. You’re not a piece of meat.” He knelt in the burnt grass, using every available second to admire the beautiful young man. “I’ll only make love to someone like you.” He kissed Charles’ ass twice then spread his buttocks apart. Exposed, his hole puckered tight against the warm summer breeze, and his balls crawled up. His tiny opening appeared unblemished, there’d been no evidence of stretching, scars, or discoloration. Malcolm’s cock swelled at the anticipation; sex with a virgin meant more than a treat, it was a godsend.
Malcolm worked up extra saliva and dug his tongue in. While licking and spearing, he slapped Charles’ sinewy thighs playfully. He moaned, bucking his ass backward. Malcolm tried to be gentle as possible, keeping his own lustful greed at bay. Getting up, he wiped his mouth and undid his belt, and he introduced Charles’ body to a finger dripping in saliva. He whimpered, and Malcolm paused to kiss his spine.
“Do you want me to stop?”
“No.” His forehead hit the hood again.
But Malcolm saw a tear glisten on his cheek. “I think this is too much. I don’t want to hurt you.”
“We’ve been fooling around for weeks.”
As Charles talked, Malcolm positioned his cock and forced the swollen bell past his tight rim. Charles tensed abruptly, rising on the balls of his feet; his distressed cries lost on the wind as he gripped the hood.
“I’ll love you gently.” He took the greatest care when pumping, he didn’t want Charles to tear and if he tensed too much that’s exactly what would happen. Once his rectum accepted the intrusion, their bodies connected.
“Ahh…it’s too much!” He lifted a knee onto the bumper, and his hair blew forward. “You’re huge!”
“Not huge. It just feels that way because you’ve never had anal sex. Relax.... Close your eyes.” He palmed his balls then massaged his perineum, applying pressure. “If you relax you’ll enjoy it more and the sex will blow your mind.”
Charles nodded, his moans in sync with each thrust and his hole became slick, slicker than saliva could do. Malcolm got a better grip on his hips and grunted with escalating excitement, fucking much harder.
He forgot where they were, and how loud Charles was wailing. He begged Malcolm to stop because he’d already cum and couldn’t handle the repeated penetration. He rammed his tight ass one last time. When he’d regained his senses, he eased his semi-hard prick out and slouched against the hood, panting.
“What’s wrong with me?” Charles quivered.
“Nothing.” He hiked up his jeans, reaching in the truck bed for a rag.
“Don’t lie to me!” Charles touched his backside and his eyes welled up. “I know it isn’t you. Something’s happened there’s slim all over my ass!”
“Sometimes when a guy is really relaxed and his partner pushes deep enough, the intestines release mucus—don’t worry about it. It just means you enjoyed the sex.” He drew him in and held him snug about the head and shoulders, and Charles hugged him, sniveling. “It’s okay.” He wiped his ass with the clean side of the rag. “You’re beautiful.”
“I love you.” Charles hugged him tighter.
He had expected to hear it sooner or later because he sensed Charles’ feelings—hell the kid would do damn near anything to make him happy. Nevertheless, love superseded what he’d wanted them to share. The relationship had gone too far.
Not knowing what to do, he’d said the same words out of respect. “I love you too.”