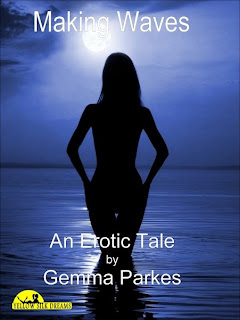 I have been thinking a lot recently about what makes a writer of books successful. What is the difference between the writer whose name is on everyone’s lips and whose book sales are in six or seven figures, and the rest of the literary tribe who labour away unknown and very nearly unrewarded?
It should be easy. Successful writers write great books, period. Write a really good story, and success will follow. Except - it only takes a moment’s thought to realise that is not true. There must be millions of people around the world who have tried creating tens of millions of books. Most of them will not be of top quality (to put it charitably) but even the most jaundiced critic would have to approve a few hundred thousand of them - if he ever read them.
On the other hand, there are some blockbuster books that are terrible, badly written, childish, plain stupid. Should I name names? Perhaps not, although I will say that grey ties and Holy Grails would make the list. I haven’t even started on all the appalling romances (for women) and brain-dead shoot-‘em-ups (for men) that fill our airport bookstores.
So, if quality does not equal success, what makes the difference? Mmh - quality helps. It is certainly easier if your writing includes the basics of grammar and spelling. What else? Should an author have passed Creative Writing 101 at college? It would probably help, but a course like that might leave you with a lot of stuff to unlearn too. After all, you have absorbed the ideas of a not-very-successful teacher, and you wouldn’t want to follow her road, would you? (If she had been really successful, she would not have time to run a college course.)
Readers want to read easily, so they like text that flows. If you can put together a story that lets the reader float along, you will keep their attention. If you put rocks in the stream, in the form of clumsy dialogue, unbelievable actions or complex information dumps, you are likely to capsize the reader’s raft. Writing that flows easily comes with practice, and a great deal of self-criticism. Some of us naturally do it well, and the rest have to work at it.
It helps to have ideas that are out of the ordinary. Write a story set in a shopping mall in Small-town USA, and it might be interesting. Set the same story an alley of medieval shops in Bremen and readers pay much more attention.
It also helps if the author is not quite normal herself, and perhaps that is what first caught my attention about Gemma Parkes. For a start, she is a Brit and so does not write an American idiom. The sound and the flow are different, and I like that. Her experiences and settings are different too, and we all like something new.
So the mechanics of her writing are good, but what makes her stand out? For me it is her deliciously dirty mind, and her innocent enjoyment of sexy, romantic ideas. I suppose she has a normal life, with kids and a husband etc., but the characters she imagines get up to the sorts of things I can only dream of. I particularly like her belief that a woman can be sexy, in control, dirty and romantic - all at the same time. 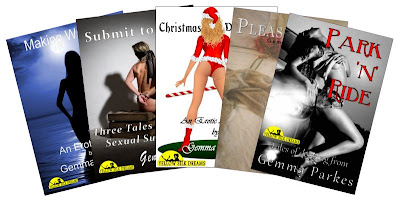 http://www.jacquelinegeorgewriter.com/Yellow_Silk_Dreams.html
The world needs more Gemmas as an antidote to the trivial, shallow, wishy-washy girls in too many modern stories. I wish her every success, and here is a little taste of her writing from Making Waves...
John picked up a newspaper from the ones on offer in the dining room and sat back down to drink his tea behind it. ‘Great’ thought Mandy, how she wished she could talk to him. But what would she say even if she could? John would flip out if he knew that someone had watched them having outdoor sex. He would completely lose it if he knew that Mandy had then actually phoned the creep. How could she even begin to explain how she got his number? What a mess. Mandy stared at the pretty floral wallpaper above John’s head, little pansies entwined with dark green foliage climbing up a pale yellow background. It was twee, but homely. Maybe she could put everything that had happened out of her mind and just enjoy the rest of the week. If everything was ok between her and John she might just have been able to do that. But it wasn’t ok; it was a sham relationship, cold and empty. Was it just her that felt that way? John seemed content enough, didn’t he realise that things weren’t right? She knew she should say something to him, perhaps give him a chance to put his point of view across, but it was so very hard to talk to someone who never talked back.
“What shall we do today John?” she asked his newspaper.
“Hum?” John didn’t move.
“I thought we might spend the morning in bed” she suggested.
John peered over the top of the paper and looked hard at Mandy. “We’re already up.” He said.
“We could go back to bed,” Mandy lowered her voice to a whisper, “And spend some time together?” she knew the wink was a mistake as John’s eyes widened with disapproval.
“The landlady will be making the beds by now Mandy, don’t be ridiculous!”
The pansies on the wallpaper seemed to smile and nod their heads in recognition of her hardly concealed disappointment.
.... Later, Mandy gives up and goes for a shower ...
Placing one hand on the cold tiled walls Mandy reached around the front of her body and worked her fingers inside her aching sex. It felt so good to be filled this way, by her own caring fingers that knew just how she liked to be touched. She moved them backwards and forwards inside herself in a slow, steady rhythm feeling her desire increasing as the slow throb from her clit grew in its intensity and begged to be relieved. Gathering her fluids from inside her onto her fingertips she began to stroke the hard, swollen nub up and down, round and round loving the way this felt. She thought about sex, uninhibited raw passion and began to increase the pressure from her fingers rubbing them faster against herself. She was barely able to keep her body steady and her hand tried to slide down the tiles which had become very slippery from her escaping breath. She thought about how it would feel to be loved by two men both eager to please her and closed her eyes as she visualized their pounding cocks entering her body at different points. She tilted her head backwards and closed her eyes visualizing the intense scene. Her thumb became the imagined cock behind her as her fingers rubbed and circled her tingling, throbbing flesh. In her mind’s eye she could see the men who were thrilling her, she was sandwiched between them as they made her their own. She was a wanton plaything to them taking all they could give her and begging for more of their eager passion, she could almost feel them sliding inside her mouth and her pussy simultaneously taking her…
“Oh God,” she whimpered as her fingers continued in their quest. Her thighs began to tremble and she bit down on her lip to stop herself crying out as her orgasm responded to the friction she was providing coupled with her vivid imagination by ripping through her grateful body and paralysing her in its wake.
“Oh, oh!” She hissed almost silently at the tiles before sliding slowly to the floor to hug her knees until the last of her trembling pleasure had subsided. 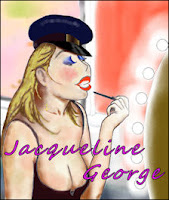