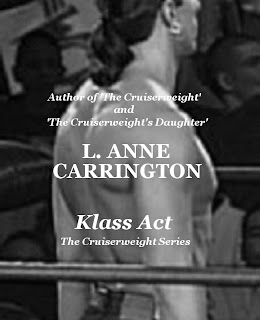 What genre do your currently write? And, is there a genre you'd like to write, but haven't tried yet?
I’ve written mostly fiction, either sports-based (specifically wrestling), and erotic short stories. As for what I want to eventually write, I’m looking towards non-fiction.
Many authors use a nom de plume, and they may use one opposite to their own sex. Do you think an author's sex or sexual orientation should dictate what genre they write?
Certainly not; for example, contrary to popular belief, there are male romance writers on the market. When my first book in The Cruiserweight Series, The Cruiserweight, was released in 2010, quite a few readers were shocked a woman really did write it, since sports entertainment/wrestling is a male-dominant industry.
Some authors have issues with character development, writer's block, plot summary etc. What is the biggest challenge you face when writing? How do you overcome the problem?
Usually, I’ll put the project aside and work on something else until the creative process is once again flowing.
What has been the single most successful marketing tool you've used to date?
Social media; almost everyone has an account somewhere these days, whether it’s Facebook, Twitter, Google Plus, or anything else.
What are you currently reading?
It varies from week to week, since I like to feature books I particularly like(d) on by book blog, The Book Shelf (http://newandgoodreading.wordpress.com).
How do you measure success?
Success is measured by personal happiness or accomplishing goals one set for themselves. Many tend to perceive success as being wealthy or at least well-known. Knowing people are enjoying my books is success enough for me.
Just for fun–
What is your favourite drink? Diet Pepsi
Are you a cat or dog person? Cat (I own three)
Love or lust? Love, of course
If you could spend the day with any famous author, who would it be? And, why?
Ann Rule. I love her writing style and would love to witness the way she researches her books.
If you could indulge free of any consequences, what would be your ultimate sexual fantasy?
Let’s just say that’s between my current man and me…and leave it at that.
Website Links:
Official Author Site: http://www.lannecarrington.com
The L. Anne Carrington Show on Spreaker Radio: https://www.spreaker.com/show/
Klass Act (The Cruiserweight Series)
Blurb:
Donovan Klass is in the fight of his life. A probation officer, he is the son of a seven-time cruiserweight wrestling champion. He has seen his daughter’s mother and his best friend climb to the very top of the pro wrestling world. Should he switch careers and become a wrestler? If he does, can he still be a good father to the daughter he adores and hold on to the beautiful ballet dancer who loves him?
Purchase Links:
Amazon: http://www.amazon.com/dp/B00C4XBMY4
Barnes and Noble: http://www.barnesandnoble.com
Publisher Link: http://www.thatright.com (though I don’t know when it was last updated…LOL)
Posted by Blak Rayne Books Blog at 11:10 PM