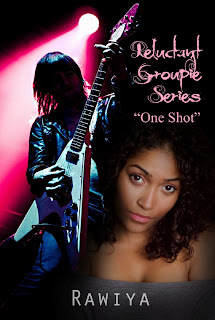 Hello to all the peeps. BL here again with another awesome post but today I’m turning it over to sweet sis Rawiya to speak about the Reluctant Groupie series which just launched on Friday. It's a collection of books bot het and m/m, about interactions between fans and their favorite musicians. This first one is near and dear to our hearts as our protagonist is a woman in her forties, young at heart with a crush on the guitarist from fictional band, Blood Reign. Here she is to tell you more!

As BL said, the first book in the Reluctant Groupie series is called One Shot. It's about a woman, in her early forties who's in lust with the guitarist from the band Blood Reign. She's a photographer, single, lives alone in the upbeat neighborhood of Wicker Park in Chicago. She's ambitious, fun loving, and is a coffeeholic!

In actuality, I wrote this character based on a close friend. Much like I Like Em Pretty, my protagonist is an older woman who's still looking for Mr. Right. Unfortunately, not a lot of books in romance feature older women who've established themselves in their careers and aren't married so, I decided to make this story for women her age. Women who aren't cougars but are searching for a man, their age or abouts, also looking for the right person to spend the rest of their days with.

In this story, Del Vanz is also in his forties and single. He's a recovering addict, a dog lover, and tightly wound! All business, no play. His band mates and tour manager give him grief but he attributes his personality to being lonely.

Both my characters have seen one another in the past and unfortunately, something stood in the way of getting them together. Now though, Blood Reign is returning back to Evie's hometown and she has one shot to make that connection with Del Vanz work. Will she? You'll have to read to find out!

I'm actually happy with the way the book turned out and I'm looking to do a sequel with Del and Evie in the next book in the series. For now though, enjoy my new release on Amazon ARe and Smashwords!

Coffee fanatic, Evie Langston has taken great shots of rock stars in her life and none has intrigued her like the picture she took of star guitarist Del Vanz of the heavy metal band, Blood Reign. Evie is more than interested in finding out more about the mystery man behind the makeup but can’t get over being intimidated and afraid of rejection.

Tightly wound but a dog lover, Del Vanz, Blood Reign’s head axeman, never saw such a beautiful lady in the pit taking pictures and he wants to know more. However, he’s not sure how she’d accept his career choice. If so, would she be interested in the man behind the white paint?

“Evie…Evie…snap out of it, will ya?” Macy snapped her fingers in front of Evie’s face while they lunched at their favorite restaurant in Wicker Park. “Look girl, you’re gonna have to do something about that obsession you got with guitar boy or let it go. Geez, you been like a fucking zombie the last couple of weeks.”

Evie shook her head and adjusted her black rimmed glasses. “I know…I−” She bit her lip and hesitated. “I dunno what to do, Mace. What if he’s got a girlfriend, or he may be gay…”

“I seriously doubt that last one.” Macy stabbed her steak and cut a piece off the side. “You’ll never find out unless you try, Evie. Sitting here thinking about the picture or staring him down won’t do you a bit of good.” Macy placed the meat between her lips.

“Yeah, I know…damnit!” Evie clenched her fist tightly and pushed her plate away.

“Girl you got it bad. Real bad when you’re not touching food from Alberta’s.” Macy finished her meal and wiped her mouth with the cloth napkin on her lap. She leaned into her friend and gripped her shoulder. “Look babe, I’ve never known you to be so scared to go after what you want. Why now, toots? Why you clamming up for this guy?”

“Because,” Evie began and crossed her arms over her chest. Her shoulders tensed. “This isn’t just any man. This is Del Vanz from Blood Reign.”

“I know but…geez, Mace, I don’t know. I just don’t feel like being rejected again. You remember the last time I tried to date someone in the music scene and how he turned out to be such a dick.”

“Yeah, yeah. Tommy from Distillery. I know.” Macy rolled her eyes and clicked her teeth. “What a fucking asshole.”

“Total ass,” she agreed. “I’m tired of giving my heart out to guys and getting little or nothing in return. I’m too old for this crap, Mace. I wanna get settled, have babies−”

“Now?” Macy’s eyes widened in shock. “I mean, don’t ya think we’re a little too old for kids now, honey?”

“I want at least one by somebody. You found Prince Charming, why can’t I?”

“Yeah well…” Macy grinned to herself and patted Evie’s shoulder. “We were lucky, Evie. I wasn’t even looking and well, he just kind of popped up. And besides that, we’re okay with the fact we didn’t have kids. More time for us.”

“Okay, why hasn’t mine just kind of popped up?” Evie drew up her lips.

“Dunno, sweets. You’re attractive, funny, and creative. I mean, I been praying to the deities for ya, Evie, but they aren’t listening.”

“Obviously.” Evie lay back in her chair and sulked. “There’s gotta be someone out there for me…”

Macy interrupted. “And perhaps it’s Del, but the only way you’ll find out is by trying. I swear girl, you’re gonna run yourself crazy, thinking about him and not doing anything about it.”

“No buts, girl. You took the shot for the concert in Indianapolis and now his band is coming back for three shows in Chicago after playing this fucked-up tour schedule.”

“Yeah…” Evie glanced away from her friend a moment and thought back to the glorious night in Indianapolis at the Metal55 venue. Blood Reign, Sacred Heart, and Dying Wish played a tribute show there and Evie had full access to shoot for the night.

In the pit in front of the stage, Evie adjusted her camera to get a couple of more shots of the bass player before she moved to the other side. She moved past a rival photographer whom she’d always thought had it in for her anyway.

She harrumphed and sprinted away just in time to avoid a would-be crowd surfer being lifted from the crowd. Evie gulped hard and knelt down in front of the godlike figure standing before her.

Again, she turned the lens of her camera and aimed it at him. Seemingly, he took notice of Evie and stomped to the edge, whipping his long black locks in front of her, keeping in rhythm to the beat.

She perused through her camera; her heart thumped in her chest. Fuck! He looked dead at her, through the red contacts, smiling, licking the top of his red pouty lips. Holy hell! He gave good shot just for her and she enjoyed every minute of it. She flashed horns and stood there mesmerized by his beauty, wondering about the man behind the makeup. Evie shook her head and propped her camera up once more, just in time to get a money shot, one she knew would be a hot picture for the paper.

Damn, I gotta keep this for myself.

No way would she give this particular one away to the Times. She’d keep it for her own personal collection and stare at it for days to come.

Evie nodded at him and gave Del the thumbs up. He in turn acknowledged her and grinned. Jesus what a hottie. If only…

"Evie…Evie…God you need to stop zoning out like that, girl!” Macy clapped her hands to break the spell, causing a few patrons to look around and snicker.

“Sorry…” Evie batted her eyelashes and leaned back in her chair again. Damn she needed to do something about this. But what? Del won’t be interested! What if he turns out to be an ass like the other guy? “I’m sorry I wasn’t good lunch company today.”

“Yeah you made me look like a pig, eating my food all alone.” Macy opened her purse and pulled out some cash.

Evie held out her hand. “No, let me at least pay for the meal,” she sighed. “Damn, I’m a mess. I can’t get this man out of my head but I don’t wanna try going after him.”

“I don’t know why, Evie. Since when have you let a failed attempt at a relationship stop you?”

“Now, Mace. I’m getting too old for this shit.” She tossed some money on the table and pouted like a petulant child.

“Yeah, but nothing will change unless you get out there and do something about it. Mister Right won’t just come banging on your door and holding a ring on a fluffy velvet pillow.”

“Why not?” Evie shook her head and twirled her red curls around her fingers. “Why can’t it be that easy? Isn’t that essentially what happened with you?”

“Nope. It just kind of happened but not without effort on his part and mine. We saw a connection and went for it. That’s what you have to do. See if the man’s interested and if he isn’t, move on to the next one.”

Evie crossed her legs and nibbled on her bottom lip, thinking about the hot guitarist again. “That’s just it, Mace. I don’t wanna move on to the next one. I want it to work. I wanna settle down and not have to worry about finding someone anymore.”

“Well, you won’t get to that point without talking to him, Evie. If you want him that bad, you should make the first move. See what he’s about. How will you know if you don’t go for it? You got three days, woman. Take advantage.”

Three days, Evie thought, to muster up the confidence to talk with this man, this larger than life rocker who most likely had a girlfriend, or maybe several. Why couldn’t he be the one to make the move? Is he even interested in me?

BLMorticia is currently a published writer with Naughty Nights Press and Rebel Ink Press. She entertains her readers with hot and smexy sex, humor, and lots of swear words. She attempts to incorporate metal music or the military in most of her works. Nothin’ sexier than metalheads or military servicemen and women! She also writes a biweekly column on Blak Rayne Blog and blogs on the First Thursday of the month at NNP Blog. For more info, please visit, Erotica With Snark RAWIYA is the more sensual erotica writer in the BLRawiya duo. She loves multiracial characters who overcome obstacles other than race. Sweet, sassy, and spicy would be the best way to describe her work. Happily married mother of two, loves music, computers, and travel. She blogs regularly at Wicked Sexy Writers. For more please visit the Rawiya's blog on Wordpress.

Thanks for the great post, Rawiya! The new story sounds great! ~ Blak Rayne