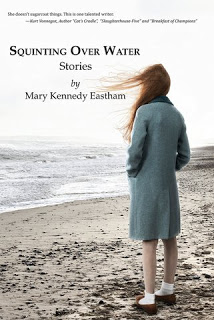 There are no perfect people here. These characters are you and me trying to make sense of things - good and bad - coming up with a Plan B when life gets messy. One early reader said she would walk across continents to get to this book. These whimsical stories transformed her, made her believe once again in the true beauty and playfulness of life.

Her name was Molly before she changed it to Pim. She grew up in Paris Valley, California, a builder's dirty trick, an optical illusion to lure people. Quiet people like her parents, into the desert. When asked to describe her childhood, she said it was like riding a bicycle through sand.

On Ash Wednesday, a day of cold rain, she was expelled from sixth grade for pretending to be the priest. Aretha May Albert's parents said Molly or Pim, pressed cigarette ashes into their daughter's dainty forehead. It was true. Sister Mary Louise Bartholomew Annunciata, whose penmanship was perfect, like an angel's, wrote this in her file: Molly Granger has too much original sin.

Home schooled, she longed to visit places different from Paris Valley, places with more water than land, She was, after all, a Scorpio. Molly dreamed of Venice. The Isle of Man. Belize. The beaches and swimming pools of L.A. These werethe places she would one day see.

No one in Paris Valley was surprised when she decided to become an actress. On the bus out of town, she gave the mayor, who also ran a successful waste management company, the finger.

Years later, a Paris Valley neighbor, a quiet guy named Dell, swears he saw her in an HBO movie. Close to 200 pounds with blood red fingernails, she was sitting on a beach in a wedding gown, sucking the guts from a lobster's claw. The guy next to her was smiling, a giant love smile, as he watched her lips at work. 'She had the power to transform him into whatever she wanted right there on the sand,' Del said.

Dell couldn't recall how the movie ended. He fell asleep just as the sand started to bubble up like molten lava, carrying the lovers toward the surf. 'It was surreal,' Dell said 'to see the bright orange Paris Valley Payless sticker stuck to the bottom of her shoe,'