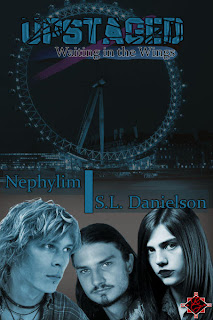 What genre do your currently write? And, is there a genre you'd like to write, but haven't tried yet?
I don’t think I write in any particular genre. I like to be versatile and try new things. I have written Erotica, once, YA, Romance, Adventure, Mystery, Fantasy. I like to write about people with problems – mental health issues, blindness, and god knows what Gabriel suffers with. I have a theme of darkness, crisis and overcoming adversity but other than that I don’t think I have a genre as such.
I guess I haven’t written Science Fiction which might be fun to write or Horror which I have tried but am terrible at, although some might suggest a few of my current works skate close.
I would like to make specific that I don’t consider the fact that my characters are gay have any bearing on genre or should ever be in a category of its own. I don’t write mm or gay fiction, I write fiction, which happens to have gay characters.
Many authors use a nom de plume, and they may use one opposite to their own sex. Do you think an author's sex or sexual orientation should dictate what genre they write?
Absolutely not. Writers write. They write whatever their muse leads them to write, at least that’s what I believe. I don’t think any of those things ‘should’ dictate what genre they write, although I have no idea if they actually do. I’m not and have never suggested that I’m male and I have never had a male gay experience, obviously, but I write male gay characters. Why? Because they are the characters who come to me and ask for their stories to be told.
Some authors have issues with character development, writer's block, plot summary etc. What is the biggest challenge you face when writing? How do you overcome the problem?
Time. I have never experienced writer’s block, quite the opposite. Given time I write prolifically and can easily manage thousands of words at a time. I think this is because it’s my characters who tell the story and all I’m doing is writing down what they say,
I don’t have a plot or plan to begin with. I have a character and I write their story. I start out with certain scenes in my head and others crop up as I write. I genuinely don’t know how the story ends before I start writing it and it often comes as a surprise to me.
However, I work part time, am a single mother to a twelve year old and a twenty six year old (not sure which one is the hardest work), and since I’ve started being a published author with no funds available to pay for anyone else to publicise me, I’ve had to spend a ridiculous amount of time on social media.
I am also a passionate believer that indie authors are all in the same boat and should help each other as much as we can, so I spend as much time as I can spare reading and reviewing others’ work, hosting them on my blog, tweeting them and giving them encouragement and space on my facebook page etc. All that takes time and energy away from my writing and whilst it’s fun and I’ve made many friends I’m an all or nothing kind of person and throw myself into everything with a feeling of responsibility, and therefore sometimes bitterly resent the time away from writing. It’s usually only a fleeting regret though,
What has been the single most successful marketing tool you've used to date?
Me.
What are you currently reading?
I don’t currently have time to read.
How do you measure success?
The fact that my stories make people think and feel. The biggest compliment I could have is that someone is affected by something I write, That’s what it’s all about.
Just for fun–
What is your favourite drink?
Gosh, loads. Alcoholic wise, I love single malt whiskey and Baileys (not together) but I can’t really drink anymore as I’m on medication that doesn’t like alcohol.
Non alcoholic it has to be ginger beer. I love anything with ginger in it.
Are you a cat or dog person?
Definitely cat. I have two black cats and another who visits as and when it pleases. Actually it’s sitting on a cushion next to me right now while one of the others is under the radiator and the other is out prowling. I love my cats and they definitely rule the house
Love or lust?
Both at the same time. What could be more exciting and satisfying than lusting after the person you’re in love with and who is in love with you? And how unsatisfying to be in love with someone you have no lustful feelings for.
If you could spend the day with any famous author, who would it be? And, why?
Terry Pratchett because it would be stimulating, exciting and a lot of fun. I would love to talk to him about his amazing characters and his incredible breadth of knowledge that underpins the stories.
If you could indulge free of any consequences, what would be your ultimate sexual fantasy?
Being the filling in a sandwich of Helena Bonham Carter and Jonny Depp. I have other, much darker fantasies. If you want to delve into them read my books, they crop up a lot in unexpected and very unobvious ways.

Website Link: nephylim-author.blogspot.com
Upstaged: Behind the Scenes
Blurb:
The adventures of Erik, the American lead singer of The Von and his snarky and enigmatic British boyfriend continue. The Von are making it big but, with all the excitement of their first record deal and tour, they don't appreciate the dangers of leaving their lovers behind and travelling half way across the world. When someone starts taking snaps of Erik and Billy in compromising situations (with each other and others) and sending them to Asher and Vince, things really head up and it looks as if the relationships are broken beyond repair.
As if that wasn't bad enough a buried terror from Asher's past bursts suddenly into his present and turns it upside down. What results is a terrifying series of events that leads to Asher and Erik in the hands of a sadistic abuser while their friends resort to desperate measures to rescue them.
Excerpt:
Frowning, on edge, and distinctly nervous, Erik watched as James tapped the laptop, bringing the screen to life.
"Jesus Christ!!"
It was Asher. But Asher as Erik had never seen him before; Asher as he never wanted to see him again. It was obviously a long time ago. Asher looked much younger, much different. His hair was shorter— shoulder length, and without the blue streaks—and his face was clean of makeup. Only his beautiful violet eyes were the same, as they stared out from the screen, almost as if he was reaching out, begging for help.
He lay on a bed, absolutely naked with his arms secured behind his back, and he was crying. There was something strange about the cries. They were hopeless, frantic, almost hysterical, but somehow directionless... blurred.
James appeared, also naked. He lay down on the bed next to Asher, glancing up at the camera. Again, Erik had the spooky feeling that he looked at him.
"Ssh, Asher. Ssh, darling. I'm here now, I'm here." He gently stroked Asher's hair and the frantic sobbing subsided to heart-wrenching, pathetic weeping.
"James? Help me, James. Please, James, please. Help me. Don’t let me die. Please, don't let me die."
"Hush now, darling. No one is going to die."
"The... the darkness, James."
"The darkness won't touch you while I'm here, darling. Be a good boy and I'll save you. I'll keep the darkness away."
"Please, James... Please...."
"Say you love me, Asher, beautiful boy."
"I..."
"Tell me you love me, Asher, or I'll have to go."
"No..." Asher's cry was wrenched from him. He was terrified, and Erik suddenly realized what was going on.
What kind of fucking monster are you? What did you do to him? He looked between the screen and James's face and tried not to show his horror, his disgust at what happened in the video. He failed. “What the fuck did you do to him? What was he, maybe fourteen? He was just a child! What the hell did you do? What have you done to Asher?" he demanded, his eyes ablaze with anger.
James turned to him and smiled. "Enjoy the show, Erik. Take a good long look at what Asher was— and is— namely, mine. He’ll always be mine. No matter how far he tries to run, how hard he tries to hide, I will find him. He's mine and he knows it." He turned to look at the screen and gently stroked the boy who used to be Asher with his finger. "My baby," he crooned. "My whore. Beautiful, wasn't he? So fucking perfect. Is he still beautiful, Erik?"
Purchase Link:
https://www.smashwords.com/books/view/295920
https://www.allromanceebooks.com/
Publisher Link:
http://www.rfppublishing.com/downloads.aspx?categoryid=21
Posted by Blak Rayne Books Blog at 10:23 PM