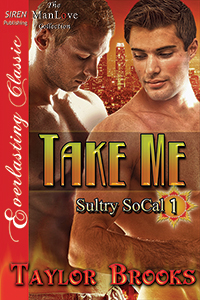 What genre do your currently write? And, is there a genre you'd like to write, but haven't tried yet?
I currently write MM Erotic Romance and I love it. I haven’t given much thought to writing another one, at least not yet anyway. I love the MM storylines too much to sway from it.
Many authors use a nom de plume, and they may use one opposite to their own sex. Do you think an author's sex or sexual orientation should dictate what genre they write?
It’s funny you should mention that. I do use a pen name, and spent hours, days and weeks agonizing over finding the perfect name that I was sure would draw in readers. Granted, I’m new to the publishing world, but from a reader’s standpoint I thought I had a winner. Only, when I submitted my book for publication I was offered a contract with the suggestion that my name be changed. I guess it wasn’t as catchy as I thought. LOL. So, after a few more hours of agonizing, Taylor was born.
Some authors have issues with character development, writer's block, plot summary etc. What is the biggest challenge you face when writing? How do you overcome the problem?
Since I’m still new, I probably haven’t come across all the problems one can. However, as I’m writing my 7th book I find that I am struggling coming up with new and inventive characters, characters that are not the same as the others. I want to give the reader something different.
What has been the single most successful marketing tool you've used to date?
Since my first book just came out April 8th, I cannot answer this yet. All I can say is I hope they all work! LOL
What are you currently reading?
I’m currently reading John Henry’s, Beautiful Charlie–Special Operations book 1 by Stormy Glenn.
How do you measure success?
That’s not an easy one to answer. I would say to be truly successful, it would mean to be able to do what you love while making some money doing it. Being rich isn’t as important. However, I feel how you act, treat others and behave are a huge part of anyone’s personal success. If you are a millionaire, but a nasty person, I don’t see you as successful. I see you as a sad person who will most likely end up alone.
Just for fun–
What is your favourite drink?
Hmm… I would have to say anything sweet and/or fruity. I’m not one for sour or bitter drinks.
Are you a cat or dog person?
Both!! Come on, they’re just so cute, and furry, and cuddly. It’s not fair to make me pick just one.
Love or lust?
Once again, both!! I think if you find love, that genuine and true love, with someone, lust follows suit. To me, there is no bigger turn on than someone who understands me, heart, body and soul.
If you could spend the day with any famous author, who would it be? And, why?
AJ Llewellyn. I’ve been a fan for years and would just love to sit down to a lunch or cocktail and pick that genius’ brains!
If you could indulge free of any consequences, what would be your ultimate sexual fantasy?
Hehehe…oh my…umm…okay. I’m not going to lie. I’ve had a fantasy of me and two–okay, maybe three or more men. Don’t judge me! :p LOL
Website Link: http://authortaylorbrooks.blogspot.com

Take Me [Sultry SoCal 1]
Blurb:
Clint Rodham has spent years being a loyal employee to Elite Imports. Despite being one of their top salesmen, his boss no longer sees him as the golden boy. Now being ostracized for his sexuality, he fights to keep the job that he not only loves, but is a natural at.
Rick Tanner just moved to Southern California from Kansas. Being a homosexual personal trainer in a small town filled with old-fashioned people who didn’t understand his way of life left him with little career opportunities.
One hot summer night, Rick is locked on the rooftop and Clint comes to his rescue. As a thank-you, he offers his hero a cold beer. With the California heat rising and desires building, the two find themselves in a storm of passion. Neither of them are able to resist. Neither of them want to. They both want to take what is within their reach, just beyond their fingertips.
Excerpt:
He felt an instant punch in his gut. The pungent taste of his own cock still lingered inside his lover’s mouth. It was such a succulent tease to his taste buds, enticing him to take all that he wanted.
A moan came from Rick as Clint reached down and took his lover’s cock in his hand. He stroked it slowly, learning the feel of it while continuing to kiss him. The skin moved so freely up and down his length. It almost felt like silk, except for the numerous thick veins, which protruded from beneath his skin. A droplet of pre-cum hit his palm as he continued stroking him. He pulled his hand up and licked the mixture off of his hand. It tasted better than he imagined and only made him crave the taste of Rick’s cock more and more.
He broke away from their kiss and ignored the whimper he heard while quickly turning himself around. There was no room for words, he just wanted to feel and get lost in doing so. He hadn’t been turned around for a fraction of a second before he felt the warm glide of Rick’s tongue against his balls.
Like a wild animal, Clint forgot everything around him and focused on the erection staring him in the face. He dipped his head down and closed his lips over the head. With one quick movement, he had Rick exactly where he wanted him, buried deep in his throat.
The taste that filled his mouth was an aphrodisiac. It had been far too long since he’d had the pleasure of sucking a good-looking and tasty cock. So long that he almost forgot how much he loved it. Quickly, he was being reminded of just how much he ached for the rich taste it provided.
He inhaled through his nostrils and let the aroma of sex fill his entire being while Rick continued sucking him off. The passion of going down on one of his lovers while the same was done to him always got him hot. This was more though. There was something so sweet about the way Rick’s lips and tongue worked him so expertly.
Bringing his lips up to the very tip of Rick’s cock, he played with it, trying to see how crazy he could make him. Flicking it with his tongue, he worked himself around his entire length until he had him moaning and bucking his hips up at Clint’s mouth.
He grabbed his dick and proceeded to stroke it while he dropped his head low to tease his balls in the same way. Rick kept himself shaved, which was exactly what he liked. There was nothing like smooth skin against the tongue and lips when getting someone off. It was all he could do to keep his composure and focus on what he was doing. Rick’s mouth was sucking him like a pro. Somehow it was better than it had been just minutes before in the living room.
Purchase Link: http://www.bookstrand.com/take-me
Publisher Link: http://www.bookstrand.com/taylor-brooks
Thanks for the doing the interview, Taylor, and giving me a wonderful excerpt to post! All the best. ~ Blak Rayne
Posted by Blak Rayne Books Blog at 9:59 PM