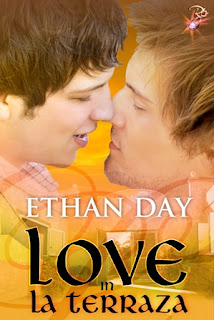 Welcome to BRB, everyone! My guest today is the hugely talented mm author Ethan Day. And, as a special treat Ethan will give away two copies of 'Love in La Terraza'! Love the cover. If you'd like a chance to win a copy of LLT please leave your name and email address in the comment section of this post. Thank you for being here, Ethan! All the best. :)
What genre do your currently write? And, is there a genre you'd like to write, but haven't tried yet?
I currently write mainly contemporary gay romance, mostly romantic comedy, but I’m venturing out into other sub-genres like mystery and paranormal, with a little time travel mixed in.
Many authors use a nom de plume, and they may use one opposite to their own sex. Do you think an author's sex or sexual orientation should dictate what genre they write?
Absolutely not. A good writer is a good writer. That’s like telling an actor who is gay in real life that they’re incapable of convincingly playing a heterosexual role. It’s just silly to me.
Some authors have issues with character development, writer's block, plot summary etc. What is the biggest challenge you face when writing? How do you overcome the problem?
I’m sure I do have writers block. I sometimes wonder if that is part of the reason I’ll go months w/o being able to write. Sometimes it’s about the need to re-charge the creative battery. In the first six months of 2012, I finished a rewrite and went through a hefty editing process for A Token of Time, finished writing Second Time Lucky, co-wrote To Catch a Fox with Geoff Knight and wrote Love in La Terraza. That was a lot for a six-month block of time and while I loved every second of it, I do think it drained me. I also had stuff like GRL mixed in there, which sucks up a lot of time and creative energy. It’s a fabulous time, but it can wipe me out. :)
The biggest key to writers block is not to stress over it when it does come around. I avoid the stress by not contracting books before they’re finished. If I have no due date, I have nothing to wig-out over when I do get stuck. Walking away from the writing every now and then is usually the best medicine for me: veg’ing out with a book, movie, spending a weekend on the couch with Netflix and TV series marathon, chatting with friends online, on the phone or in person–basically anything that takes me out of that writers head space for a while.
What has been the single most successful marketing tool you've used to date?
Gosh, that’s really difficult to say. I think for me, the best marketing has been things I don’t really consider marketing, like GRL. I realize part of the reason I’m there is to promote myself as an author, but for the most part it’s not something that feels like work to me. I’ve always been a bit of a social creature and writing is a very solitary occupation, so getting away from the computer and spending time with people who enjoy the same things I do seems more like a reward or a really cool perk.
What are you currently reading?
Not much, who has the frickin’ time!?! I can barely squeeze in any writing of my own at the moment.
How do you measure success?
I don’t really think I try to measure my success. It’s kind of pointless to a degree as there really is no central reporting of sales data, so it’s impossible to ever truly know where I sit when compared to others. As long as I enjoy what I do and can make a living doing it, I’d consider that success.
Just for fun–
What is your favourite drink? Diet Coke and wine – red, white, hell…even pink! If it comes from a grape and it has alcohol in it, I’ll drink it!
Are you a cat or dog person? I’m an equal opportunity pet lover, though I am allergic to cats so that takes some of the fun out of it, but they chase imaginary bugs up the wall…how cool is that!?! I have a dog now, a Yorkie, but she’s more hypoallergenic as Yorkie’s have hair and not fur. She’s adorable and she totally rules the roost.
Love or lust? Can’t we have both? :)
If you could spend the day with any famous author, who would it be? And, why? Absolutely none of them! I already know all about what they do…boring! Give me a hunky marine, an astronaut, or a cat burglar…a nice one that won’t like kill me or anything. That sounds way more interesting.
If you could indulge free of any consequences, what would be your ultimate sexual fantasy? If I could indulge free of any consequences, I’d wish to be able to eat as much chocolate as I wanted and never get fat. I can’t think of anything sexual that I’d want to do that I wouldn’t do if given the opportunity, lol.

Website Link: http://ethanday.com/
Love in La Terraza
Blurb:
Cain Elliott is a desperate man – on the brink of losing La Terraza, the 1920’s Spanish style courtyard apartment complex his grandmother left him in her will, he’s faced with the option of selling to a real estate developer or losing the building outright, due to the costs of upkeep that have now left him teetering on the brink of bankruptcy.
On the partnership fast-track at the flashy architectural firm of Hamilton-Bach, Henry Abrams is new in town, a little lonely and looking for inspiration. Tired of games and longing for something real, Henry discovers the road to happiness could lie in the arms of the sad, uncomplicated Cain Elliott.
Discovering that Hamilton-Bach represents the mysterious entrepreneur attempting to purchase La Terraza, combined with the self-doubt and mistrust over a love that develops too fast, leave both men struggling to decide whether or not they can truly find…Love in La Terraza.
Excerpt:
“Pardon me for interrupting,” a deep, sexy southern voice came from behind Cain. “I couldn’t help but notice the entire table staring at me.”
Cain turned, looking upward at the man in question and trying his best to not laugh. “Hiya.”
“No pardon needed.” Eddie stood up from the table while yanking on Matt’s arm. “We were just leaving.”
Cain felt the heat flush his cheeks the instant Eddie had said it.
Not at all obvious.
Matt stood, clumsily. “Please take a seat, though. Cain was planning to hang.”
Cain rolled his eyes. “And I’m just dying to keep you company, sir. In exchange for taking me off their hands my daddies can offer you two goats, a head of cattle and a skillet.”
Eddie was already shaking his head in disgust. “Please try and stick around long enough to make it through the first act, Mr…?”
“Abrams. Henry Abrams,” he said, extending his hand before noticing the white folding cane in Eddie’s hand.
Cain thought he was kinda cute, standing there slightly awkward for a moment as he tried to decide what to do with his hand now that it was already out there. He tossed Henry a lifeline by taking it instead, shaking his hand.
“The second act does have a bitchin’ musical number you don’t wanna miss, Mr. Abrams. My name is Cain Elliott.”
“May I sit?” Henry asked as everyone said their goodbyes to Eddie and Matt who scurried off into the crowd, whispering to one another.
“Please,” Nic said, smiling as if she were Cain’s self-appointed social director, having completely missed the cues Eddie had thrown down like gas on an already flaming forest fire.
Cain could tell Stu had not but wasn’t quite able to figure out a subtle way to tell his wife they were now intruding upon and likely impeding the sacred homo mating dance.
“So what is it you do, Henry?” Nic asked.
Cain could tell she was wired up and ready to play Debbie Drill Sergeant, already commencing with the interrogation.
Henry started to answer, but Cain dreamily placed two fingertips over the man’s lips.
He laughed to himself, realizing he’d had just enough alcohol to make him fearless. “Let’s not do the whole, this is me and that is you shakedown, gorgeous. I’m feeling like a little mystery might do me some good. How about you?”
Henry’s forehead crinkled, as if he were thinking real hard about whether or not he liked where this was going. His playful half smile told Cain he was still amused if nothing else.
“We can always have share-time later, you know, after—if the sex is hot, that is.”
Henry blushed, but he started to laugh. Cain could tell the man knew he was at least half joking for the benefit of their audience across the table.
“Well, what if he’s a serial killer or something?” Nic asked, visibly disgusted with Cain.
“He most likely wouldn’t come out and say so just because you asked him, dear.”
Nic started to object then must’ve realized Cain had a point.
“You aren’t a serial killer, right?” Cain muttered out of the corner of his mouth.
“No, sir, I am not.” He smiled at Nic, pouring on the charm. “I hereby solemnly swear to inflict no pain or suffering upon your good friend.”
“Not even if I beg you to?” Cain asked.
PurchaseLink: http://www.resplendencepublishing.com
Publisher Link: http://www.resplendencepublishing.com/1.html
Posted by Blak Rayne Books Blog at 11:55 PM