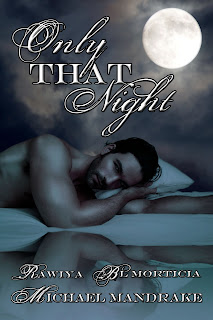 One Helluva First Date
BLMorticia
Good morning and thanks to Blak Rayne for having me. Just last week the Only THAT Night anthology released. I contributed along with fellow muses, Michael Mandrake and Rawiya. This collection of three stories about three couples who only have one night together to prove their feelings for one another. The stories all have different endings and will all have full novellas released sometime in 2013. 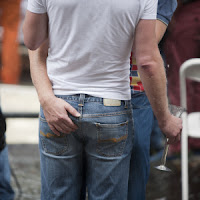 In my story, One Helluva First Date, I’m writing about a closeted gay cowboy whose in love with a retired NFL player. They meet at Bobby Leslie’s coming home party and Cade is a little more than inebriated. What kind of impression does this leave on Bobby who has feelings for Cade as well? Have you ever been too drunk when you met up with someone you’d had a mad crush on? Well Cade is going through this in the tale. How will he handle it? You have to read to find out.
Funny how it started with just one picture that I used for a free story blog and now, this little short is turning into a novella I hope to release before the end of this year. Look for the short in the anthology called Only That Night, available at these retailers.
Amazon
ARe
Smashwords
One Helluva First Date Blurb: Bobby Leslie has returned home to Amarillo only to meet up with the man he’s loved for over a decade, Cade Spencer. Their first meeting isn’t exactly what either of them had in mind.
At a welcome home party in a tiny apartment in Amarillo, Cade stumbled backwards from the table with an empty glass in hand. Circles of all colors appeared before his eyes as he attempted to blink back memories of six wasted months with a man who didn’t want to stay closeted. Shit! Shouldn’t have had that last one! His friend Mike warned him about having too much champagne but hey, he wanted to have some fun and forget about his ex, Jesse.  Besides, all that waited him at home was a cold bed and his daddy wanting him to do the morning chores.
I’ll be payin for this in the mornin!
The occasion was supposed to be a happy one with Bobby Leslie, local football star coming back to Amarillo after his retirement from the NFL. Instead it was Cade’s way of getting over his broken heart.
“Whoa there hunny, where you off to?”
A firm hand caught his backside, keeping him from falling onto the hardwood floors. Cade grasped the broad shoulder of his longtime crush, the man of honor himself, Bobby Leslie. Quickly, the bile rose in his throat. Cade swallowed hard to keep from upchucking on this man and embarrassing the hell out of himself.
“Uh, need to go to the john, Bobby,” Cade let out quickly, attempting to keep his stomach from erupting. Inhaling Bobby’s strong scent, he lay on his shoulder, feeling woozier than before.
“I’ll help ya’. Don’t think your sweet ass will make it that far.” Bobby threw his beer can into a nearby garbage basket.
Cade only nodded, hating himself for getting this drunk in front of Bobby. He’d loved this man for the better part of ten years. All through high school and college until he dropped out to help his daddy with the ranch. He never had the nerve to say a thing and now, here was his chance and damnit, he’d be lucky to get a fucking word out with the champagne making its way up his throat.
Fuck!
“Looks like you gonna blow any minute now, Cade.”
Damn!
Bobby’s southern accent rang in Cade’s ears. God he loved that taut and tanned body, the azure blue eyes that resembled the Pacific. The man was sex on a stick.
Cade wanted to be fucked by him six ways to Sunday but didn’t have the balls to tell him.
“Ugh.”
“Hold on now, babe. We’re almost there then you can puke your little guts out!” Bobby assisted him all the way to the toilet and guided his head over the bowl.
Cade dropped to his knees and promptly hurled. His stomach did flips, erupting like a volcano.
“Damn, sugah! Too much of that cheap shit!” Bobby softly rubbed his head, tangling his long fingers in Cade’s curls.
Cade stopped for a moment and closed his eyes, wishing he’d heeded Mike’s warning. He relaxed under his touch and sighed deeply. What an embarrassing time for him right now.
I wonder would he still like to go out with me?
BLMorticia is currently a published writer with Naughty Nights Press and Rebel Ink Press. She entertains her readers with hot and smexy sex, humor, and lots of swear words. She attempts to incorporate metal music or the military in most of her works. Nothin’ sexier than metalheads or military servicemen and women! She also writes a biweekly column on Blak Rayne Books and blogs on the First Thursday of the month at NNP Blog. For more info, please visit, Erotica With Snark  Link to BL’sBooks
Thanks for the great post as always, BL! ~ Blak Rayne
Posted by Blak Rayne Books Blog at 10:36 PM