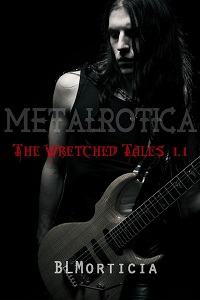 Metalrotica
BL Morticia
Hiya people! I’m really excited about my latest book, the first in The Wretched Tales series part of my Metalrotica collection. This initial short is called Corey’s Debut and it’s just the beginning of my long saga I plan on writing for quite a while.
You may ask where did the inspiration come from for this series? Well, I’ll tell ya’. Being an 80’s metal child as well as a journalist from an e-zine, Shar noticed a lot of interesting things about the world of heavy metal. The distinct personalities, the music, the loyalty of fans worldwide showing their appreciation in so many more ways than one. In addition, being on the inside as an interviewer, Shar saw some of the things the general public didn’t always get to see. This gave her even more inspiration to bring erotica romance into the heavy metal world. I mean, heavy metal invokes a lot of emotion and tension. Band members on stage performing in front of hundreds or thousands, mosh pits full of men and women maiming themselves during the show. The meetings with fans and press, the tension from band members who chose to move on and form other bands or go it alone. Hey, these are all situations that are story worthy and Shar and I are adding the erotica romance touch to put together this snarky, emotion, tense, and hot series.
As I said at the outset, The Wretched Tales is only the beginning. This portion starts the series of shorts that act as soap opera episodes, every other month on the last Friday until the volume is done. Once it is, it moves onto the next set of volumes encompassing the life of the band through bassist Corey Patrick’s eyes, He tells you about the band while they travel the world, meeting and interacting with fans, the record company, the press, and other bands. The series will have lots of tension, snark, swear words, and hot sex.  I’m good at writing that! *laughs* Then it moves onto other factions with two all-girl metal bands, a series about groupies, as well as a couple of single novellas with other characters I’ve created that aren’t related to The Wretched.
I’m really looking forward to sharing these stories with the fans in the coming months and hope you’ll join me on the wild ride. Music is one of my sole inspirations to write and now I’m combining the eroticism with that admiration for the genre.
Blurb: Corey Patrick has arrived, fresh out of Boston to perform with The Wretched, one of the biggest bands on the planet. Immediately, the bass player takes advantage of the perks provided including hobnobbing with members of the press!
All Romance  Smashwords  Amazon
Over the loudspeaker…
“Ladies and gentlemen, crowd surfing and/or moshing will result in immediate dismissal from the venue. Enjoy the show.”
In a drug filled haze, I stood on the stage with my new band mates. The lights dimmed, the crowd chanting, “Wretched, wretched,” in unison, throwing up the horns as if in a similar trance. I’d been with several acts, toiling in the background as the spare, the fill in, the resident head banger while others gained the spotlight. Now was my turn to be the one. And even better in the most sought after metal act from the west coast of North America, The Wretched.
“You ready Corey? You better play your ass off tonight so they’ll forget about Randy’s stupid butt,” yelled Nicolai Zander with a wry smile.
Excited as a pig in shit, I responded with a nod and gave my bass a couple of plucks.
Once he turned his attention back to the crowd, he changed his expression immediately from smirk to scowl. The short, pudgy runt everyone came to know and love stalked the stage like Napoleon with a microphone in hand. As per usual, Nicolai donned baggy black trousers with pockets down both sides, chains hanging from every loop and hole. His Testament t-shirt and his trademark cowboy boots had both seen better days, but it made up the persona known as Nicolai Zander. The, ‘I don’t give a fuck ‘cause I’m the leader of this bunch of misfits’ kind of look. Glassy greenish blue eyes peered at his minions, and he returned their adulation with his own one finger salute and tongue wag.
Damn
“Wretched, wretched, wretched…” the swarm of metal heads chanted, the spotlight shone on me, then Nicolai one after the other. Within seconds, the background music faded, and drummer Bryan started the first beats of our legendary song Devil’s Isle.
“YEOOOHHHH…” Nicolai screeched like a cat in heat and threw his gloved fist up in the air. True metalers formed a circle pit, running into one another, arms up, the looks on their faces, pure aggression. Others leapt on top of various shoulders, attempting to surf closer to the stage causing the security guys a lot of headache, but I fucking loved it.
This is what I’ve wanted other than a steady lay I could call my very own. This is my fucking life! This is what every young man dreams about from puberty in mom’s house to grown ass man living in mom’s basement.
I am Corey from the Wretched, and I have arrived!
For more info on the Wretched Series, follow Corey Patrick on Twitter and the Metalrotica blog
BLMorticia is currently a published writer with Naughty Nights Press and Rebel Ink Press. She entertains her readers with hot and smexy sex, humor, and lots of swear words. She attempts to incorporate metal music or the military in most of her works. Nothin’ sexier than metalheads or military servicemen and women! She also writes a biweekly column on Blak Rayne Books and blogs on the First Thursday of the month at NNP Blog. For more info, please visit, Erotica With Snark
Thanks for stopping by, BL! Great post as always! ~ Blak Rayne