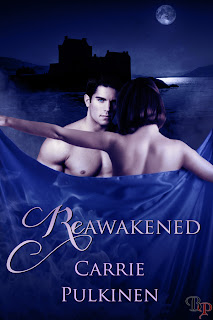 Reawakened
By Carrie Pulkinen
Her magic has been reawakened. But will her heart let her follow her destiny?
Blurb:
Jules Hume lives in a world where magic is a myth and supernatural creatures are fiction. Or so she thinks. Her boyfriend Ian would have to disagree. When Jules discovers the man of her dreams is not only a vampire, but a vampire king who's tasked with saving the world from a demon attack, life as she knows it ends. Can she accept her fate and take her place by Ian's side as ruler of the paranormal world? Or will she close her mind and her heart to the chance at love and adventure?
Excerpt:
This is the night, I thought. After what just happened, he had to tell me everything. I braced myself, and walked into the bedroom. My clothes were gone. Ian must've put them in the dryer already. On the bed lay a soft, midnight blue robe. The bedroom door was closed, and I could hear the shower running down the hall. I figured it would be a while before Ian came back, so I left the towel in the bathroom and walked naked across the room to get the robe. Distracted as I was with everything that had happened, I wasn't paying attention to where I stepped, and I tripped on the rug, falling face-first on the ground. I let out a little squeal as I went down. I didn't think I was loud, but Ian was in the room in seconds.
"Are you okay, my Jewel? I heard you scream." He took me by the hand and lifted me to my feet.
"I'm fine." Heat flushed my cheeks. "And I didn't scream. I just squealed a little bit when I fell. You didn't have to stop your shower to come rescue me again."
It was then that I realized I was naked. And my eyes had been locked with his since he came through the door, so I was just beginning to realize that he was naked too. And he was wet. His muscles flowed down his body like a perfectly carved statue, firm and hard. My eyes took in his form. From his eyes, down to his chest. His muscular arms had me longing for his embrace. His perfect six-pack abs had my hands twitching with the need to touch. Down my eyes went to his...oh my! He was definitely excited. I forced my gaze back up to his eyes, and the expression I found there was one of pure need...of lust...and love. His eyes went down my body and back up to return my gaze. He licked is lips.
That did it for me. I couldn't waste the opportunity, so I threw myself into his arms, and we kissed passionately. Our tongues explored each other mouths, necks, shoulders. He embraced me, pulling our bodies together, the cool wetness of his skin sending chills down my spine. As the energy pulsed between us, I felt him...long and hard pressed against my stomach. I took him in my hand and stroked. He sucked in a sharp breath, closed his eyes, and leaned his head back, moaning in pleasure. I pressed my lips to his neck and kissed him, tasted him, as my hand stroked him to the rhythm of our pulsing energy. He pulled my leg up over his hip and pressed himself against me. Dear God! My heart raced. My hands trembled. His mouth found mine again as his hand twisted in my hair. The energy pulsed harder, faster, until my head spun, and I had to pull away to catch my breath.
When his eyes finally met mine, they were deep. Deeper than I'd ever seen them before, and I was lost in them.
Author Link: http://carrie-pulkinen.blogspot.com