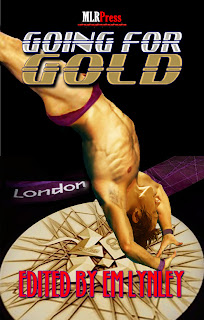 Okay, this is really strange, and I'm not sure why I didn't notice sooner, but the last novel posted on Wednesday 'The Open Water Swimmer' and the novel today 'Going For Gold' are both about swimmers. What are the odds I'd book two authors, in the same week, who have written novels about swimmers? I'm not sure. LOL But it feels kind of Twilight Zone-ish. Anyway, welcome to BRB, sweeties! And, welcome, Whitley. Let's get this party started. Tell us about yourself.
I’ve worked in the medical field for a couple of decades. About three years ago, started reading a lot of M/M, (starting with Fair Game by Josh Lanyon) and decided I liked two heroes better than one. Before that, I’d read and written M/F.
Where and/or how do you find the greatest inspiration?
A story on the news, seeing a couple of people at the mall, reading a story that triggers a memory.
What made you chose to write M/M contemporary literature in particular? And, is there any other genre you’d like to write? And, if so, why?
I like the opportunity to explore the “bare” emotions revealed with intimacy—it adds to characterization. And M/M is hot. I’d like to try writing outside the contemporary genre, adding a paranormal aspect. On the other end, I have an idea for a children’s book—for two to five-year-olds!
Which appears first when contemplating a new project: a character, the plot or the title?
The plot, followed almost immediately by the two lead characters and the opening scenario. Sometimes I don’t get the names right at first, and have to tweak those before I can really get going. Title develops as I go along.
What’s the hardest part of a novel for you to write: beginning, middle or end? Why?
The middle—when I’m twisting together the suspense plot and the romance plot, balancing them out, and keeping the subplots from taking over.
Has your own life influenced your novels? If so, how?
I tend to like at least one character to have a medical bent—makes me feel more in control. That “write what you know” thing.
Writing sex/romantic scenes can be a challenge for some authors. Do you find it difficult?
Depends on the scene—sometimes it flows naturally, other times I can’t get the internal/external dialogue right at first, and have to come back to it. If yes, how do you compensate? If no, where do you draw your inspiration? In my head is a conglomeration of many M/M scenes and I’ve absorbed some of the techniques that other writers have used to execute them. Most of the time, I use characterization and ask myself “how would these guys react?”
Do you use a certain formula to write the sensual parts? Nope. Do you prefer the sex to be open and bold? Yes. Or left to the imagination?
Although 90% of sex is in the mind, erotic books are more explicit, and that’s what I want—not a closed door. Once in awhile I’ll write something to set the mood, and then let it fade to gray, like: Joe rolled over in bed. “Good morning.”
“Morning.” Bill grinned and stretched. “Breakfast?”
“Mmm, later.” With a smile, Joe pulled him in. “After a little couple time.”
Bill grinned.
Who is your favourite character, which you’ve created? Matt Justice, an Olympic shooter. And, why? Matt has emotional baggage, but he also is open to risking his heart. He’s a fierce competitor, but also seeking something beyond a casual hookup.
Tell us about your newest release.
It’s the story of a doctor working at the 2012 Summer Olympics, who meets a competitive shooter in need of medical attention. Both have baggage, but ultimately realize the truths about themselves that are interfering with their relationship, and they come together in the end—happily for now with optimism for happily ever after.
---Shoot for the Gold (part of the Going For Gold Olympic anthology from MLR Press).
Just for fun–
What is your favourite colour? Hot pink.
Which do you prefer a great hero or a great villain? I prefer reading a great hero, but writing a great villain.
What is your favourite movie? And, why? I’d say Love Actually, because it’s a nice integration of multiple love stories with variable outcomes.
If you could be anyone in the world who would it be? And, why? A world traveler with tons of material to spin into fiction. I’ve never traveled.
Where do you see your writing career in the next five to ten years? I’d like to have a couple of books/short stories out a year, and get to the point the day job is a memory instead of a necessity.
Website Link: www.whitleygray.com
Going For Gold

Blurb:
Matt Justice has worked for years toward his goal of winning Olympic gold. Three decades ago, his father won an Olympic shooting competition; he was Matt’s biggest supporter until he said two little words: “I’m gay.” If he can emulate the feat his father accomplished in the past, maybe Matt can mend their fractured relationship.
Physician Levi Wolf and his partner Brett had looked forward to attending the London Olympic Games, until the car accident that left Levi unscathed but killed the love of his life. It’s been three years, and Levi has kept his heart under wraps. He’s attending the Olympics alone—as a physician instead of as a tourist. The last thing he wants to consider is letting go of Brett’s memory.
When Matt has an accident that threatens his ability to compete, Levi uses his skill at acupuncture to treat the blinding headaches. As the competition comes down to the wire, Levi discovers that sometimes the prize is right in front of you.
Excerpt:
Matt squinted at the map. God, he hoped he’d taken the right direction to find the shuttle to the shooting venue at the Royal Artillery Barracks. For the last month, he’d anticipated seeing the unique decorations for the Olympic use of the buildings. The equipment should’ve arrived, and until he saw with his own eyes that the firearms had made it, he wouldn’t be able to rest. The campus made no sense. Where the devil was the exit to this place? The Olympic Village might as well be a labyrinth. Matt turned the chart to the side. North? Which way was —
Clang.
Pain exploded in his forehead and nose. Matt staggered sideways onto the grass, lost his fight with gravity, and fell. The vision in his right eye blurred, and the inside of his head reverberated with pain. “Fuck.”
“Okay, mate?” The voice came from above, concern wrapped in a Cockney accent.
Matt clapped a hand over his eye, which made the pain worse, and pulled his fingers away smeared with red. Blood? No fucking way. What’d he hit? He turned his head, and hissed as pain thumped his skull. Bad idea. “What hit me?”
“Ye ’it the scaffold.” Feet clanged on metal, clopped on concrete, and muted on the grass. “Yer bleedin’. Shite.”
Through bleary eyes, Matt squinted at the workman who squatted next to him. The man’s wooly eyebrows knit in concern. He fumbled in his pocket and held out a handkerchief. Matt watched himself take the cloth. A wave of nausea twisted his gut, and he flipped on his side and retched, head pounding. Jesus Christ.
“Ye okay?”
Kidding, right? Wiping the back of his hand across his mouth, Matt rolled to his back and opened his eyes. Overcast sky, smell of grass, and ringing in the ears. Just dandy.
More footsteps rustled across the grass, and a blond man came into view. Lips tight, he frowned and knelt beside Matt. “Hey there. Looks like a nasty cut. Can you open your right eye?” Midwestern American accent. A fellow athlete?
“It is open. Isn’t it?”
“No.” The hanky was pulled out of Matt’s hand, and Blond Guy dabbed at the cut. “Better get you to the clinic.”
Aw, shit on a biscuit. Clinic? Doctors and X-rays and needles? He’d never live it down. Matt groaned. “It’s not that bad. A little clean up and an ice pack and I’ll be fine.”
Blond Guy’s frown deepened, twin creases forming between his eyebrows. He leaned in. Nice eyes, blue like the steel of a shotgun. “That’s not going to do it. Too deep. Looks like you rang your bell when you connected with the post. You might have a concussion.”
Matt struggled to sit up, and the scenery took a drunken swirl. Nausea burbled in his throat. “I don’t have a concussion.” He clamped his teeth together and took a couple of deep breaths through his nose. Don’t vomit. Sit for a minute, reassure the Good Samaritan, and go check on the guns. “I need to go.”
Purchase Link: MLR Books
Thanks you for stopping by, Whitley! All the best of success for your future projects!
~Blak Rayne