Something New On The Menu 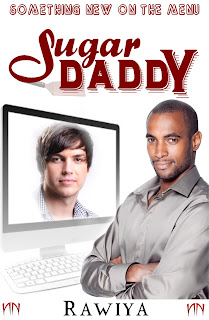 Greeting readers. Rawiya is posting for me this week since she has a new release. I’ll be back next time with another smexy post!

Matthew Davidson wants a MAN! The setting shifts away from the America’s to Britain where Matthew and his childhood friend, Devon Peartly attend a cooking school to obtain their cooking certificates. The young man wants a partner so badly, he decides he’ll try an online dating service in hopes of finding a black man that can take care of and satisfy him romantically.

He finds that man, Antwon Bantu on an online dating site and is instantly intrigued. Little does Matthew know that Antwon is involved in a “convenient” marriage and is seeking a younger partner so he can finally get on with his life. Instead of confessing the truth, he decides to hide it, fearing he’ll lose the chance with Matthew if he informs him. To complicate things, Antwon’s wife claims to be in love with him. Antwon must choose what’s more important; loving Matthew or saving his impeccable reputation as a top barrister in the London courts?

Which will he choose?

In this scene, Matthew is expecting a called from Antwon and can’t help but be nervous.

After school, Matthew did everything he could think of to keep himself busy until nine pm. He cleaned, did all his homework, cooked dinner, and talked Devon into leaving for the evening even though his good friend wanted to stay and hear the conversation. He couldn’t wait to hear that voice. Just thinking about the rich deep tone made his hardened muscle swell underneath his sweats. “Damn, what time is it?”

Nearly eight thirty; just a half an hour till he’d hear the voice of his potential new man. It didn’t matter if he wasn’t into Caucasians at the moment. Matthew assured himself he’d make Dlovr change his mind very quickly.

Matthew went into his room, trying to relax and get his wits about him. He lay on the bed he’d just made up, holding the phone in his overly busy hands. “Damnit, I’m so nervous.”
It had been awhile since he was this overjoyed about talking to someone new.
He just has to be the one.

All the signs pointed to him being the one he’d been searching for, with the only tiny detail being his preference for black or Latino. Nothin’ against men of the colored variety but I’m quite entertaining.
Gripping his cell tightly, he smiled to himself and stared at the screen. What would Dlover sound like? Matthew hoped he’d have a deep voice like Barry White, along with a slow hand. “Mhph.” A face like Denzel wouldn’t hurt! Although Matthew did say that looks didn’t matter that much, he had to wonder if Dlover was at least an average looking bloke. What if he’s butt ugly but real sweet? Just the thought made Matthew shudder. “We’ll cross that bridge when I see the picture.” He bit his lip and placed the handset face down in his lap. “C’mon nine o’clock.” This waiting period made Matthew even more uncomfortable. One by one, he began biting his nails on one hand while the other fidgeted with his curls. All kinds of what ifs ran through his brain. What if I’m not able to sway him? What if he’s pissed when he sees I’m not the man in the photo? What if he is butt ugly? Matthew shook his head and sighed. This had to be the longest half hour of his life. “Maybe I should call him, maybe…”

Jarred from his deep thoughts, Matthew nearly jumped out his skin when his phone blared the simple ring tone. His palms slightly moist, he wiped them on his trousers. Attempting to relax, he took a deep breath, and pressed the green button. “Hello?”

Matthew grinned and drew up his lips. A slight bit of guilt came over him. Choco eyes and hair but not skin. “Yes it is, is this Dlover?”

“It is indeed. How are you?” The smile came through the headset making Matthew’s smile grow wider. Not quite Barry White but still sexy. He licked his lips and propped his cell on his shoulder. “I’m good. My name is Matthew by the way. And yours?”

Silence then the voice came through once more. “Antwon. It’s good to talk to you, Matthew. I have to say I’ve been looking forward to this.”

“Yeah me too.” Making himself comfortable on the couch, he shifted and stretched his long legs out over the coffee table. “I have to be honest, I’ve been quite nervous about talking with you all day.”
“Same here. Maybe we could calm each other down. It’s not like we’re meeting one another in person… yet.”

The last part of that statement caused Matthew’s heart to skip a beat. Yeah they weren’t meeting but what would occur when they did?

Check out the rest of the series here on Amazon
RAWIYA is the more sensual erotica writer in the BLRawiya duo. Rawiya's first sole author book, “Time to Make the Donuts” is now available in multiple digital formats through online vendors and her first MMF Living In The Now was released in April from Naughty Nights Press.

Rawiya loves multiracial characters who overcome obstacles other than race. Sweet, sassy, and spicy would be the best way to describe her work. Happily married mother of two, loves music, computers, and travel. She blogs regularly at Wicked Sexy Writers. For more please visit the Rawiya’s blog on:
http://rawiyaerotica.wordpress.com/.

Thanks for stopping by, Rawiya! Congrats on the new boo!. All the best!~ Blak Rayne
Posted by Blak Rayne Books Blog at 11:30 PM