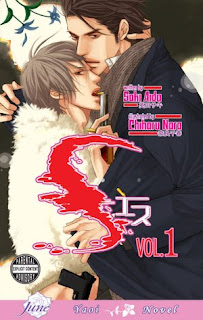 S Vol. 1, the first in a series of yaoi novels, written by Saki Aido and illustrated by Chiharu Nara, is a story knee deep in Yakuza, and everything that involves the sordid underbelly of Japan’s Shinjuku district’s Kabukicho, or red light district; an area where the streets are lined with love hotels and bars, and any sexual fetish can become a reality.

To give you a very brief synopsis, Masaki Shiiba is a detective working undercover in conjunction with a spy or ‘S’, a man by the name Andou, an informant who is a member of a criminal organization, the Matsukura Group. Andou provides everything Shiiba needs in exchange for special favours. Shiiba is on the hunt for illegal guns coming in from China. While digging for dirt on the Chinese, he runs into a man by the name of Keigo Munechika, another member of the Matsukura Group, but of a much higher rank. Munechika is an intimidating and seemingly cold person, and during their initial encounter, he makes the young detective nervous.

In the beginning of the novel Shiiba receives a mysterious phone call during the night–a man tells him that ‘he’d better be careful with Andou’. It’s a subtle warning, and subsequently a short time later, Andou is murdered. Shiiba takes the loss hard, as Andou was not only his S, but a friend of many years; he feels responsible, that perhaps he should have done more to prevent the man’s untimely death. In addition, the incident seems to drag Shiiba emotionally down, and it pushes him farther into the world of organized crime, something he wishes to destroy. Bound and determined to find Andou’s killer, Shiiba accidentally becomes involved with the wrong person, and Munechika, the man he almost loathes comes to his rescue.

My over all feelings for this novel were mixed. It wasn’t until chapter five that the story really took off for me. And, as I’ve stated previous, when any book is translated from Japanese to English, a lot can literally be lost in the process, including the author’s true voice. S Vol. 1 has a good plot and strong characters, but sadly it lacks in description, and decent editing. The POV’s are jumpy, dialogue confusing, and the chapters ended at what I felt were the more inopportune moments. On the other hand, the sex scenes were nicely written, the relationship between the uke and his semi believable, and the information about the Japanese police and Asian mob well researched.

Will I read S Vol. 2 and S Vol. 3? Yes, most definitely! The reason I say this is because I did enjoy the plot and characters, and I’m curious; I’d like to see how Shiiba’s relationship with his semi develops. As far as a rating goes, I give Saki Aido 3.5 stars for the story and 4 flames for the sex. If you decide to give this novel a try, I will warn you the sex isn’t over the top explicit, but it isn’t tame either, and there is a rape scene.