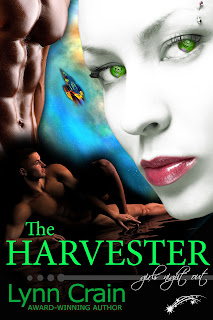 Welcome to BRB, sweeties. My guest today is a superb, award winning author. And, don't you just love her latest novel cover? The colours are brilliantly eye-catching. I tell you the cover does it for me every time! Welcome Lynn, tell us about yourself.
Well...about myself...hmmm, interesting question. I was born in Ohio, transplanted to Nevada at an early age. Grew up there and most of the time hated it because it’s brown, not green, and of course, there’s the heat. Got married there, had two boys and now two grandsons. Right now though, I’m in Vienna, Austria, living my husband’s dream of working for an organization affiliated with the United Nations. Some days, I have the time of my life, others, I wonder just why he brought me somewhere that it was hot with humidity.
Where and/or how do you find the greatest inspiration?
In everything. I mean, just look around? How can one not be inspired by life? I find inspiration in all I see and read. Some of it actually pans out into a story, other bits just get filed away in my idea file.
What made you chose to write erotic literature in particular? And is there any other genre you’d like to write? And if so, why?
I’d always written sensual stories. When erotic came out, I decided to try and see if I could push that envelope just a little more and surprised even myself. I wasn’t sure if I had it in me. I write a lot of different genres and the reason is why is simple. I write a story that calls to me. If that genre happens to be sci-fi erotic romance, I write it. If it happens to be sensual fantasy romance, I write it. If it is a contemporary romance, I write it. Characters call me and I answer the call.
Which appears first when contemplating a new project: A character, the plot and/or the title?
Personally, it can be either one. I’ve written stories based upon pictures, stories based upon the fact I could see the whole plot in my mind and stories based exclusively on a title.
What’s the hardest part of a novel for you to write: Beginning, middle and/or end? Why?
Usually the middle. That’s where all the hard stuff happens, where you have to add the emotional layers and make sure very plot point works. I have had a few books languish because of the middle. I’d have already written the beginning and the last chapter. I normally have to sit down and outline those middle chapters just to get the book done.
Has your own life influenced your novels? And if so, how?
The influence has mainly been with setting. I tend to write about places I’ve been moreso than anything.
Writing sex/romantic scenes can be a challenge for some authors. Do you find it difficult? If yes, how do you compensate? If no, where do you draw your inspiration?
Some days absolutely. There have been times where I’ll go to a different story because the love scene isn’t flowing like it should. I have one story stalled at a love scene because I thought it was all initiated by the hero then the heroine took over. Have to think about that one. LOL!
But most of the time, I don’t have any problems. And I usually gear myself up by listening to music or watching some romantic movie.
Do you have a method you use to write the sensual parts? Do you prefer the sex to be open and bold? Or left to the imagination?
Again, it depends upon the story. I’ve been flabbergasted when characters have told me they weren’t going to bare it all. But then again, they are creatures of their own making, aren’t they?
Who is your favourite character, which you’ve created? And why?
Aeryn Delancie from an unpublished book titled, Where’s My Underwear? and the reasons many. She’s sharp, witty, funny and totally in love with someone she lost years ago. I can’t wait to get that book published. It’s out making the rounds right now and if no one likes it, I’ll self-publish it...I think it’s that good.
Tell us about your newest release.
My newest release is titled, The Harvester. It’s about a woman who used to harvest men for her mother’s brothels in a far away star system. She’s the crown princess who doesn’t want to wear the crown because in her society you have to kill your parent. Instead, she decides to leave home and find her life elsewhere. She came to earth, establishes herself as a body guard then makes a comfortable life for herself. That is until the night she goes to a male review in Las Vegas where she lives and notices another Harvester there trying to tag two men she finds attractive. It’s a hot and bumpy right to claim the men and the planet as her own.
Just for fun–
What is your favourite colour? fushia
Which do you prefer a great hero or a great villain? Villian as I’m always trying to figure them out.
What is your favourite movie? And why? Geez...there are lots of them...Notting Hill, While You Were Sleeping, Friends With Benefits to name a few.
If you could be anyone in the world who would it be? And why? Myself. Like a friend of mine says, everyone else is taken. Now, I might change a few things but generally I like myself just fine.
Where do you see your writing career in the next five to ten years? I see myself still writing and publishing. I’ll be doing this until the day I die...it’s what I was meant to do. 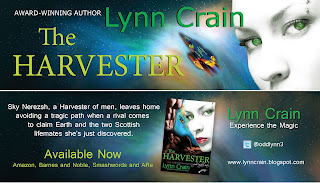 Website: www.lynncrain.com (temporarily using www.lynncrain.blogspot.com as website is being redesigned.)
The Harvester
Blurb:
Princess Sky Xera Nerezsh came to earth to avoid the normal succession path to the throne. Being the oldest daughter, she will be required to murder her mother in order to secure her path to power. Sky loves her mother and refuses this path, choosing instead to disappear in the vast reaches of space. When her past collides with her present, she has to think quick on her feet, claim two men and a whole planet just to avoid the inevitable: a meeting with her mother. Along the way, she discovers true love and a burning need to be there for them always. Now if the other Harvesters can just keep to themselves, they’ll have no problems. But who said true love was ever easy.
Excerpt:
Suddenly one dark haired man was on the table in front of her, gyrating his sexy hips in her face, his package mere inches from her mouth. In another life, she would have leaned forward and planted her lips on his crotch, willing his body to perform. She really should have been paying more attention to the situation around her instead of wondering about where Angela had gotten herself.
Leaning down, his breath reminded her of the sweetgrass that grew on her home planet of Tyrsati, heightening her senses even more. “Sweetheart, I see how you want me...it’s written all over your face.” His voice purred in her ear.
Sky gasped and pulled back to get a better look at the man in front of her. He reminded her of the gods of Vada. He was tall, well-muscled, dark hair brushing the top of his shoulders and had the most incredible violet eyes she had ever seen. Guess the optics weren’t wrong. He would fetch an exquisite price on Texra and her mother would be extremely proud for her acquisition. She shook her head to clear the cobwebs.
“Nice eyes, sweetie – hang around after the show – I’ll make it worth your while.” His voice hit a resonance with her and her whole body flushed. It had been years since she had reacted to any man. Now her emotions and body betrayed her for an insignificant being on an outer planet. She shook her head. This planet was no more insignificant than any other, including her own but she knew if she didn’t get herself under control, the Harvester in her would take over. Old habits die hard.
“Don’t let his demeanor fool you, luvey. He just wants to get into your pants.” Another deep voice reverberated close to her ear.
She glanced over her shoulder and again her breath was nearly taken away as she looked into the bluest eyes she’d ever seen in the galaxy bar none. The sky of Octa couldn’t hold a candle to the color that swirled in their depths.
“Ooo, Jaxon is right about the eyes. Very cool green.”
“Contacts,” Sky managed to get out for the second time this evening, her voice low.
“And a sexy voice to boot. Very nice.” He twirled away to join his companion on stage. He was just as nice looking as the first guy but just a little shorter. His shiny hair swung around his jaw line as he moved and her hands ached to run her fingers through it and over his body.
She sat there stunned as the people at her table laughed and clapped her on the back as if she’d done some sort of fantastic feat. While her time on this planet had been very thrilling, in her old life working for her mother, their performances had to be impeccable or their fate might be worse than death. She vaguely wondered just how she’d rate them.

Thanks for stopping by, Lynn. Your new novel sounds great! I wish you the best of success for the future. ~ Blak Rayne
Posted by Blak Rayne Books Blog at 11:30 PM