Welcome to BRB, sweeties! This is an odd post to be sharing on the blog, but I thought what the hell! I’m a mother and part Scottish, so here’s a little movie review. 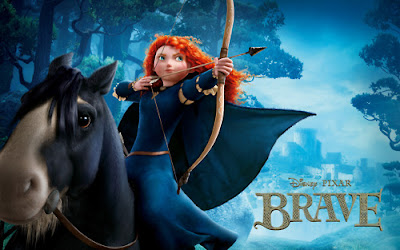 Everyone knows I love Japanese anime, but I also love animation period, which includes Dream Works, Sony Entertainment, Pixar and Disney animation. Over the years Disney has come out with some fantastic films. Some of my personal favourites include Sleepy Beauty, Beauty & The Beast and Mulan, to name just a few. And, last night my family and I viewed the Disney Pixar production, Brave.

The setting is Scotland, the year, unknown and long ago, probably within the medieval era. A young Scottish princess by the name of Merida is forced to choose a husband from three, rival Scottish clans. Basically, Merida’s mother Elinor, the queen, has been primping and preening her since childhood for this moment. Merida doesn't see things the way her mother does and wishes for freedom–freedom to fall in love, freedom to choose her own husband and be the women she wishes to be, not what everyone else expects. The long and short of it, Merida rebels, her mother gets mad, and they argue until the point of no return–a fight that causes Merida to do something she deeply regrets later. 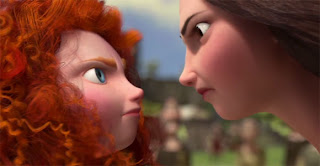 Brave is rated G and, oddly enough, it is one of Disney’s more dark and violent films, and there are two scenes with nudity, nothing major, but I thought perhaps relative to mention, since it’s listed as a family feature. At one hundred and forty-two minutes, this animation is really very well done, it’s different from Disney’s usual choice of storyline, but that’s what makes it well worth the money. Chalked with humour and beautifully CGed with memorable characters and a plot that teaches a valuable lesson, I did love the movie, though I found it tailored more for an adult audience. When Merida hurt her mother, my son turned to me and said, “Love you, Mom.” I’m not sure if the movie touched a nerve with him, or if he wanted to reassure me, he’d never hurt me like Merida hurt her mother. Either way, the moral of the story came across loud and clear and he seemed to appreciate it. Thank you Disney! 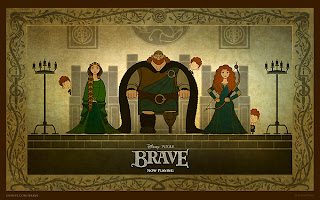 Bravo for Brave! I give Merida and her quirky family 5 stars and I will definitely be adding it to my movie collection!