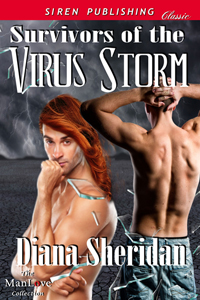 Survivors of The Virus Storm


In a post-apocalyptic world, can two men who may be the only survivors find happiness with just each other and their survival instincts?
Blurb:

After a hand-crafted, weapons-grade virus mutates and decimates nearly all the world’s population, Aaron fears he’s the only one left. He is overjoyed to discover another live human, Keith, who also happens to be gay, as is Aaron. Aaron travels to Indiana to live with Keith, with a plan to at least be housemates, but they find they are very compatible with each other and quickly become lovers. It takes some getting used to the new world, and their adventures include looting stores whose owners are dead to get needed items, and chasing off bands of feral dogs (whose owners have died and left them hungry). The world as they once knew it is vastly and irrevocably changed. Can the two lovers, build a new world for themselves…and will their search turn up any other survivors, or are the two of them all that is left?

Aaron continued working his way in and out with his finger, then added a second finger, and then a third. Then he began fucking him harder, slamming the three fingers in and out harder, faster, deeper. At last removing his fingers, Aaron rubbed them across his dickhead, smearing whatever lube was left on his fingers onto the taut skin and blending the gel with the natural lube that was welling copiously up from his cum-hole.
Then Aaron positioned his crown at Keith’s entryway and pushed forward. Keith’s sphincter resisted for a minute, barring Aaron from getting inside. Then it relaxed, and Aaron popped within those dank and humid depths. Keith howled with delight. Aaron reflected that it didn’t matter how loud either of them howled or whether the windows were open. Nobody was going to hear them. Once again, as with his previous nudity, it was a thought that was simultaneously both liberating and sobering.
Aaron put a hand on one of Keith’s nipples and tweaked it, then stroked across the brown button surface. The whimper that followed was clearly not one of pain but rather expressed a deep hunger. Aaron pushed in a little farther. Keith eagerly humped upward, his butt swallowing a couple more inches of Aaron’s cock. Aaron pushed forward. Keith’s ass now had more than half Aaron’s dick buried inside it. “Yessss!” he seethed and began humping harder, eager for his ass to swallow it all.
At that point, Aaron ceased trying to exercise any restraint. If Keith was hunching wildly back and forth, there was no reason for Aaron to hold back in concern for hurting him, so Aaron began really battering Keith’s ass, throwing his all into the fuck. With tight ass cheeks powering his strokes, he lunged in, pulled back, and drove deep again.
The walls of Keith’s anal tube were clasping Aaron’s dick tightly. Those welcoming ass-walls folded around Aaron like clingy food wrap. He drove in and out relentlessly, thrusting ever deeper, feeling the stroking walls rubbing him halfway to orgasm before he’d barely started.
Keith was halfway to orgasm, too. Despite having just come off, he was up as hard and as big as ever, his dick throbbing visibly. Aaron gazed hungrily at Keith’s cum-glistening rod, his gaping cum-hole, and the pre-fuck juices that were bubbling out of him to coat his already-sticky corona.
Aaron was thinking of jerking Keith’s rod while he fucked him, but Keith beat him to it, wrapping his own hand around his shaft and beginning rhythmic jacking motions that carried him swiftly up closer to climax. Aaron watched as Keith’s face set in a mask of need and concentration, contorted by all the feelings that were surging through him. Then he grunted and let fly with a volley of sperm.
A large splat of thick jizz landed on Aaron’s chest, followed by a second gusher that was almost as generous in quantity as the first. There followed several smaller, weaker spurts that decorated Keith’s own chin and chest.
That sight, the sounds of his soft groans, and the feel of his thick syrup on Aaron’s body all worked to hasten his own orgasm. He felt his balls tighten up, pulling up into his body. Then his dick quivered and shot off a series of eruptions that felt larger than any orgasm he’d ever experienced before.

Very awesome, Diana. Love the blurb and excerpt, actually,  love it all! I might have to pick up this one for myself. Thank you for stopping by and sharing your talent. ~ Blak Rayne
Posted by Blak Rayne Books Blog at 11:30 PM