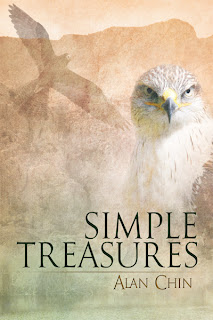 Please welcome Dreamspinner Press author, Alan Chin, to BRB sweeties, a very talented man!
Tell us about yourself.
I spent twenty some odd years working in corporate American, in San Francisco to be exact. I walked away from that career in 1999 to travel the world and write. So far I've visited over forty-five countries and published five novels. I have completed two more novels I hope to publish this year.
Where and/or how do you find the greatest inspiration?
By reading about ideas from other writer.  I'm an avid reader, and I find that other writers I respect, many long dead,  have a huge influence on what I write.
What made you chose to write LGBTQ literature in particular? And is there any other genre you’d like to write? And if so, why?
I write LGBTQ literature. I choose to write that because I'm gay and I like writing about people like me.
Which appears first when contemplating a new project: A character, the plot and/or the title?
For me, the first thing that comes to mind is the theme, or premise. Once I decided on the central idea, I create a set of characters, setting, and plot that I feel will best present that idea.
What’s the hardest part of a novel for you to write: Beginning, middle and/or end? Why?
It's all hard, but I would say the middle. That's because I'm trying to force the characters toward a logical ending that I have set in my mind, and they often want to take off in different directions. It can be maddening when they take on a life of their own and start making demands. But then, that's when I know they are multidimensional.
Has your own life influenced your novels? And if so, how?
Of course, how could it not? I see all my characters and all my situations through the looking glass of my life. I feel all writers do this whether they realize it or not.
Writing sex/romantic scenes can be a challenge for some authors. Do you find it difficult? If yes, how do you compensate? If no, where do you draw your inspiration?
I find romantic scenes to be the easiest to write. I think it's because I have a lifetime of being a romantic guy to draw upon. I'm had many lovers and two long-term relationships. For most of my life, it was all about the chase and not so much about the sex, and I've chased a lot of guys in my time.
Who is your favorite character, which you’ve created? And why?
My favorite character was Jem, a seven year old boy in Butterfly's Child. He was fresh, and mentally damaged from watching his older brother being molested by their stepfather. I love him most because he showed me how to look at the world through a child's eyes.

Here’s what Victor Banis had to say about Simple Treasures: “I just finished reading this - what a thrill I got from it. This is the mega-talented Alan Chin at the peak of his form, one of those miraculous occasions when he surpasses mere writing and enters the realm of art. If your spirit is hungry, here is manna.”

Just for fun–
What is your favorite color(s)?
Teal Blue
Which do you prefer a great hero or a great villain?
You have to had both. It takes a great villain to push the hero to greatness.
What is your favourite movie? And why?
Guess Who's Coming To Diner. I love Hepburn and Tracy movies, and that was their last, and best. Poitier was pretty damned good, too.
If you could be anyone in the world who would it be? And why?
I'm not willing to take on anyone else's set of issues. I am exactly the person I want to be. It has taken me many years to become this person of high ideals and integrity, and I'm now enjoying this person.
Where do you see your writing career in the next five to ten years?
I see myself spending most of my days in my study, delving into different worlds and different characters in order to create unforgettable stories told by unforgettable characters. The only thing I hope with change is that many more people will read my work.
Website: http://alanchin.net

Newly released from a mental institution, Simple’s first job is caring for Emmett, a crusty drunkard dying of cancer on a ranch in Utah. Simple’s first fragile friendship is with Emmett’s grandson Jude, a gay youth in Gothic drag who gets nothing but grief from his grandfather. In an attempt to help both men, Simple, a Shoshone Indian, decides to perform a ceremony that will save Emmett by transferring his spirit into the body of a falcon.

Working to capture a falcon will bring Emmett and Jude closer as Jude and Simple’s growing love for each other blossoms, but all is not well. When the ranch, Jude’s future, and Simple’s happiness are threatened, more than Emmett’s spirit faces a bleak future.

In the faint flush of predawn, a Kenworth sixteen-wheeler topped a ridge, forty miles east of Saint George, Utah. With only a half load to hinder it, the rig barreled along the interstate at twenty miles an hour over the speed limit. The driver hoped to make Las Vegas in time for breakfast. The truck rumbled on, unrelenting.

Simple rode shotgun, staring at a dusting of lights that looked like a pocketful of stars cast across a vast and lonely mesa. The iridescent specks reminded him of flickering candles at a funeral, although he had no memory of ever attending one, and he wondered if that metaphor was some ominous sign of what lay waiting for him in Saint George.

He had stayed awake all night, too excited to sleep. His eyes burned, and his mouth felt parched. He wanted a drink, but his water bottle was stashed deep in the backpack that rested on the floorboard, between his feet. Outside, the crowns of cottonwoods, tinged pink with the coming dawn, appeared to be pasted upon a gunmetal-gray landscape. With his peripheral vision, he saw the rearview mirror reflect beams of pale orange light that now chased him across the mesa.

The driver, Dale McNally, a high-school dropout with rough manners and rougher speech, couldn’t keep his eyes open any longer. His eyelids drifted toward his cheeks at about the same rate as the Kenworth swerved off the highway. When the right front tire gouged into the skim of gravel on the highway shoulder, Simple grabbed McNally’s thigh and shook it. McNally’s eyes popped open, blinked. He eased the rig back onto the blacktop.

McNally had his sleeves rolled up to his elbows, showing the thick, ropy muscles of his forearms. He wore a cowboy hat with a rattlesnake-skin band. The dashboard's lights cast an eerie glimmer across his face, and a thatch of dark hair spread out below his hat, covering his ears and hanging over his frayed collar.

“Christ sakes,” McNally barked, “I picked you up so’s you could keep me awake. Help me out here, boy.”

That happened often. Simple was twenty-five years old—a stoic ranch-hand life had made him look closer to thirty—but even men his own age, like McNally, called him boy, son, or kid.

“I didn’t mean that. You made yourself perfectly clear about that.”

“Talk to me. Do somersaults on the hood if you have to; just keep me awake.”

Simple cracked his passenger window an inch, enough for a frosty breeze to whistle through the cab. He stared out the windshield, silent as a stone, trying to think of something to say.

“Someone should invent an electrical device for drivers to wear under their hats,” Simple said, “to zap their balls whenever they get drowsy. It could trigger from the change in blood pressure at the temples when the eyelids start to fall.”

Dale snarled, “Don’t be talkin’ about my balls if you ain’t goin’ to do anything ’bout ’em.”

Purchase: http://tinyurl.com/3hfajkf
Thanks for stopping by, Alan. I wish you the best for the future! ~ Blak Rayne
Posted by Blak Rayne Books Blog at 11:00 PM