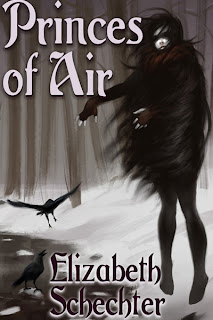 Welcome to BRB, sweeties. My guest today insists she's just an average, stay-at-home mom, decidedly nothing special. Well...I suppose every author could say the same thing. But when you do have talent, strive for perfection, and constantly re-evaluate yourself, there has to be more to the autobiography. Thank you for stopping by, Elizabeth. It's wonderful to have you here. Let's get started!

Tell us about yourself.
- Well, I'm a stay-at home mom, and I live with my husband and my son in Florida.  I'm an English teacher by training, and a writer by choice.  I refer to myself as a pervy fetish-writer.

Where and/or how do you find the greatest inspiration?
- Everywhere. I am a people watcher, so I like to go down to the theme parks or out to the mall and just watch. I read constantly. And sometimes scenes are just inspired by a piece of music. Oh, and dreams. I am constantly waking up in the middle of the night and grabbing for a notebook because whatever it was I'd just dreamed needs to be written down immediately.

Which appears first when contemplating a new project: A character, the plot and/or the title?
-Depends on the project. Sometimes, I'll wake up in the middle of the night with a scene. For example, I woke up one night with the image of a young man driving a wooden sword into the ground, and using magic to sprout a tree from it. I mulled that over for a day, and then sat down and wrote the outline for the project I'm working on right now, which is my most challenging to date - it's a YA romance! Absolutely no sex! I'm not sure how I'm going to pull this one off, actually.

What’s the hardest part of a novel for you to write: Beginning, middle and/or end? Why?
- The hardest part is the part I didn't plan for. I have to have a storyline and a synopsis, or I cannot finish the novel. I just finished a novel that I started six years ago, and that went off into the weeds. I tried to write it without an outline, and it stalled out. Once I sat down and outlined what I thought was going to happen, I realized how wrong I was, and went back and redid the outline into the story that it was supposed to be, and finally finished it back in February.

Has your own life influenced your novels? And if so, how?
-Compared to my characters? I'm about as boring as mud! I can honestly say that most of the things that my characters have done, I have never done. That being said, there are some mannerisms that I see in my own life (cough*my husband*cough) that work their way into stories on occasion. I defy anyone to point them out, though.

Writing sex/romantic scenes can be a challenge for some authors. Do you find it difficult? If yes, how do you compensate? If no, where do you draw your inspiration?
-Writing sex scenes slows me down to a crawl, to the point that I get frustrated with my lack of progress and put a placeholder into the text so that I can get on with the story (the placeholder is usually  My main reason for this? Because the sex has to read right. I have pitched books across the room because the sex was so bad. I don't want someone pitching one of mine across the room!

Who is your favourite character, which you’ve created? And why?
- My favorite character to date is Oscar, who shouldn't have been. He's one of the nine brothers in Princes of Air, and he was created as a spear-carrier. Walk on, have a few lines, walk off, never be seen again. Only he refused to stay down! He's obnoxious and uppity and a right royal pain in the ass, and I love him to bits. So much so that when we started the roll-out for the Princes of Air release, I asked my editor if she would mind if I wrote up the story where HE finds a mate.

That became "The Ice Raven," and you can find it on the Circlet Press Livejournal (http://circletpress.livejournal.com/ ) from the end of November. Eventually, that story will get cleaned up (it appeared unedited) and will be offered as a bonus feature with Princes of Air. (And if anyone who owns the book wants to drop me an email through my website, I'd be happy to send them a copy).

Tell us about your newest release.
-My most recent release is Princes of Air, which came out last November from Circlet Press. It's my first novel, and I'm pretty proud of it. It started, again, from a dream, and was originally just a short story -- pretty much the first third of the book.  It got rejected from something or other, so I tried to mainstream it and took the sex out. Got rejected again, so I put the sex back in and sent it off to Circlet, since I'd written stories for them before. Cecilia Tan gave me some fantastic advice -- specifically, that there was more to this story than what I was telling. So I sat down and figured out the rest of the book. The rest is history.

What is your favourite colour?
- Anything purple is mine. If it isn't purple... well, that's why dye is for.
Which do you prefer a great hero or a great villain?
- A great villain. Heroes are easy. A great villain is a treasure. Especially if you can make them into a sympathetic villain, one that you hate, but you also love.
What is your favourite movie? And why?
- The Princess Bride. It's just such a wonderful story, and I love everyone in it.
If you could be anyone in the world who would it be? And why?
- Why would I want to be anyone but me?
Where do you see your writing career in the next five to ten years?
- I'd like to see my name on a book on the shelves in a big book store. On a paper book, I mean.

Blurb:
Long ago, the Raven-Goddess Morrigan bore nine sons; each of them was gifted by their mother with the ability to change their shape and fly as ravens. Their mother charged them with the task of protecting the people of Eire, and gave them each another gift — the ability to recognize their one true mate.
Niall, the youngest of the nine, believes his mate lost forever, and discovers how wrong he is when he is taken captive by Arlaith, a power-mad woman who seeks to overthrow the High King. Arlaith’s plans unleash an ancient evil that threatens the people, the land itself, and any hope of happiness that Niall and his brothers might have.
The path to finding a mate isn’t always easy. The brothers soon discover that if they want to find the ones with whom they’ll spend the rest of forever, they’re going to need more than their mother’s gift — that is, assuming that they can manage to survive long enough to defeat an undead monster with a taste for immortal blood.


To my surprise, she took my arm again, turning me to face her. I could see her gown abandoned on the ground behind her. "You saved my life. How can I offer any complaint?" She moved closer to me, a small smile on her face, a flush growing on her cheeks. "Tell me, my hero. Is there no way I can repay your kindness?" She took another step, pressing her body against mine, wrapped her arms around my neck, and kissed me.
I swear, by mother's tail feathers, until that moment I had put aside all thoughts of a tryst. I was fully intending to bring this woman back to her home and then take wing back to Dun-Morrigan. That was before I found myself with a lovely naked woman in my arms, her lips on mine, her hands sliding down my chest to work at my belt. Her skin was cool from the waters of the pool, warming under my touch as I ran my hands down her back, pulling her closer, feeling her wet hair tangling through my fingers.  With quick motions she stripped me of my cloak of feathers and my leather jerkin, loosened the waist of my trews, and drew me down to lay with her, hidden in the sun-warmed grass. Arlaith knew what she was about, her long fingers dancing over my skin, pushing my trews down to my hips so that my cock sprang free. She laughed at the sight and mounted me, her hands on my chest, pinning me onto my back as she slowly lowered herself onto me, taking me into her an inch at a time until she was seated firmly against my hips. I reached for her, and she caught my hands in hers, lacing her fingers into mine and balancing like that as she rode me; I could feel the brush of her hair against my legs as she tipped her head back and moaned her pleasures to the wind, her cries sounding in sharp counterpoint to my own as her slow, deliberate rocking attempted to drive me insane with desire.
I hadn't expected it, but this woman was every bit as wild as Maeve had been, and it was incredibly exciting to me how completely Arlaith took command of our lovemaking. She knew what to do with a man's body, how to get the responses that she wanted; she stretched out over me and kissed me deeply, then slowly straightened, her hair falling in a curtain around us as she ran her hands over my chest, finding my nipples with her fingertips and toying with them until I moaned and grabbed her hips. I wanted her underneath me, wanted to lave her breasts with my tongue, drive into her until she screamed, but when I bucked underneath her and tried to roll her over, she laughed and pushed me back down.