I WANNA SEXT U UP - AMBER SKYZE 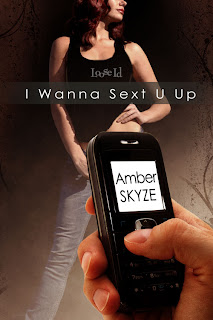 Where and/or how do you find the greatest inspiration?
Music. I generate a ton of ideas from music. Today I was driving home from the doctors. I heard a new song and boom…an idea emerged.

Which appears first when contemplating a new project: A character, the plot and/or the title?
I know it probably sounds strange, but the title is normally the first thing that pops in my mind for a new project.

What’s the hardest part of a novel for you to write: Beginning, middle and/or end? Why?
The middle. I’m a punster so sometimes I get stuck in the middle.

Writing sex/romantic scenes can be a challenge for some authors. Do you find it difficult? If yes, how do you compensate? If no, where do you draw your inspiration?
It does become difficult because when you’ve written 30+ books you’ve written tons of sex scenes in various places. For me I tend to run out of unique ways of doing it and unique places.

Just for fun–
What is your favourite colour(s)?
Red and purple…obviously not together.
Which do you prefer a great hero or a great villain?
Hmmm, sometimes both
If you could be anyone in the world who would it be? And why?
Me, I like my life.
Where do you see your writing career in the next five to ten years?
Hopefully I’ll have added another 30+ books to my sold list!

I Wanna Sext U Up

Beckett Manning, the host of Room Makeovers is ready to give Riley Anderson more than a remodeled kitchen. He’s about to bring her to the edge of ecstasy and back. Whether it’s hot sex in the bathtub or Riley hog-tied to the bed, he’s determined to show this brazen beauty how sexually desired she is.

A simple text leads to a case of mistaken communication and before long Riley finds herself tied to her bed and being driven to distraction. Beckett knows how to tease and torture every inch of her skin. He also knows his way around an orgasm, which keeps Riley wanting more.
Excerpt:
It’s over, Riley. U r just no good in bed. Boring in fact. I moved my things out earlier.

Riley Anderson read the text for the hundredth time. She’d kept it to remind her of the asshole she’d spent too many years with. The words served as a reminder of all her anger and resentment for the jerk who hadn’t had the decency to break up with her face-to-face. No, he had to do it over text.

“Aaargh!” Riley raised the sledgehammer again. She brought the hammer down on the kitchen cabinet with every ounce of strength her arms possessed. “This is for you, dirt bag.” She sent the iron head crashing into another wooden door. “Not good in bed? Why because I didn’t get off on choking you until you almost passed out?”

Aside from the last year of their relationship when Terry wanted to explore other fetishes, Riley believed they had a great thing going. She thought for sure he would be the man she’d marry. When she bought the house it was with the intention that someday Terry would be her husband and they’d fill the spare bedrooms with children. How wrong she’d been.

The hammer smashed into the wood door of the overhead cabinet.

“Because passing out wasn’t fun? Fuck you, Terry.”

She repeatedly pounded away at the cabinets until she’d destroyed them all. “That’ll fix your ass, Terry.”

She stood back and assessed the damage. She’d managed to tear apart the kitchen in less than an hour. Her arms were sore from the weight of the tiny wrecking ball, but that didn’t matter. She’d accomplished something her ex only promised her for the last year of their relationship. She’d started the renovation of the kitchen.

Now that Terry had been gone for nine months, she’d do it on her own. She didn’t need him to remodel. Riley was a smart woman. She’d be her own fix-it handywoman.

“Guess I’d better go to the hardware store and get a move on this.” She leaned the wooden handle of the hammer against the cracked wood of the cabinet and wiped her hands together.

Riley retrieved her purse and keys from the Formica counter top and headed out the door -- one destination in mind. The local chain home repair store.

The ride to the hardware store was a blur. Her only thought…what steps she’d need to take to get the work done. She’d have to put in new cabinets. She wanted new appliances. Stainless steel. Granite countertops were a must. Those Formica ones just wouldn’t cut it any longer.

She pulled into a parking spot and turned off the car.

“Time to buy a new kitchen.”

Confidence radiated off her as she stepped into the large store. She felt proud. She had a project to do while she was on vacation. It’d likely take her longer than the week, but it would be a start.

You're very welcome, Amber, and I wish to thank you for stopping by. All the best! ~ Blak Rayne
Posted by Blak Rayne Books Blog at 11:00 PM