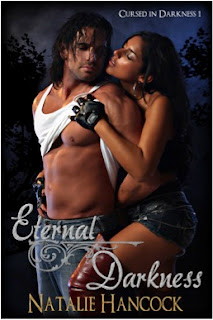 Welcome to BRB, sweeties. How was your weekend? Enjoyable, I hope. Mine was excellent. The weather has been exceptionally beautiful for spring in Vancouver, and I've taken advantage of every minute. Now it's Monday and time to get back to blogging and writing. Anyway, to start off the week with even more heat, fellow eXtasy author, Natalia Handcock, is here to share a little about her life and talent. And, I must warn you now, the excerpt from her book is RATED R. So pull up a chair and perhaps a fan, 'cos it's gonna to get steamy hot! LOL Thanks for stopping by, Natalie. Let's get started...

Tell us about yourself.
Well, I’m Natalie, obviously. I’m twenty years old and have been writing since I was fourteen. I love to read, listen to loud rock/hardcore music and play games. I love animals and studied an animal course for two years before I even thought about sending my work off to publishers. I was born in Plymouth Devon and moved to Lincoln at a young age. I now live with my boyfriend, Reece, and our little zoo, which includes; my hamster named Crunch, a chinchilla called Hektor and three guinea pigs, Fluff, Smudge and Squig in the middle of nowhere We both love animals and hope to have an army of guinea pigs, hamsters and chinchilla’s. Along with a goat. Unfortunately, our other hamster, Hamster passed away. I love him loads. I miss his squeak chats over tea.

Where and/or how do you find the greatest inspiration?
I read a lot, so I get my inspiration from there mostly, though I dream ideas for all of my books. Also, my partner, Reece has one hell of an imagination and he could be telling me something, and I would think of something to go in my book, but it’s completely irrelevant to what he was saying. It’s weird, but I do it a lot.


What made you chose to write paranormal erotic/romantic literature in particular? And is there any other genre you’d like to write? And if so, why?
I actually didn’t set out to write erotic, but whenever I wrote the book—and it might seem weird me saying it like this—I always thought of sex. When I wrote Eternal Darkness, I had the romance in my mind; I knew what was going to happen, and why it was going to happen. But the sex just kept slipping into my head, and it was after writing my first sexual scene that I realised why I had been thinking about it. For me, when you love someone, you love everything. You love how they look, even on their bad days. You love everything they do, love the sound of their voice, and the touch of them. Even the smell. But to write a romance book, and have someone feel all those things towards someone, it made sense for me to add in the sex, because you let out a LOT of emotions while getting intimate with your partner, and I wanted to show just how Shade made Layla feel, and how she did likewise.


Which appears first when contemplating a new project: A character, the plot and/or the title?
Plot. I could have the plot in mind, and the characters would just be faceless people. Once I’ve written down the plot, the characters just come alive around it.

What’s the hardest part of a novel for you to write: Beginning, middle and/or end? Why?
Most definitely the Beginning. The middle and the end just seem to come to me and I usually have those written down as notes before even starting the beginning. I find it hard to just start it really. I have one thing in my head, and it sounds amazing, but when I write it down, it really doesn’t seem right.


Has your own life influenced your novels? And if so, how?
I’d like to think that it hasn’t, but deep down I think it has. I had a hard life (I won’t go into the details) and I always struggled to fit in as I grew up. I had secrets, horrible ones, and I guess that's what my book is about. Layla is a dhampir—half-vampire, half-human—who drinks vampire blood. She also has a deep dark secret that she can’t and won’t tell anyone, no matter how much she trusts them. So she struggles to ‘fit in’ when she is taken to the academy full of vampires. When they find out what she is, they don’t accept her instantly. Only one person does, someone who knew all along what she was, and didn’t care—Shade. Shade is my Reece I guess, and Reece accepted me for me, he didn’t care (in the sense of disgust) about my past. He didn’t care that I had secrets. He loves me the way I am, and he’s helped me through a lot. That’s exactly how Shade feels for Layla. Though their relation goes FAR deeper than a normal one, but you’ll have to read the books to understand what I’m talking about. The story, as a whole, is basically Layla learning to trust those around her enough to let her secrets out, and heal the hole in her heart, because she isn’t free from them and struggles with them through-out the series.


Writing sex/romantic scenes can be a challenge for some authors. Do you find it difficult? If yes, how do you compensate? If no, where do you draw your inspiration?
I don’t find it difficult to write the sex/romantic scenes. The one person to draw my inspiration on that topic is my partner Reece. It helps that we’ve been together over three years now, and still in our ‘honeymoon’ phase and that he’s willing to read what I have written.


Who is your favourite character, which you’ve created? And why?
Ahh, my favourite character I’ve created would obviously be Layla, because she is my main character. She’s my favourite because she's strong, incredibly fast, beautiful and deadly. But she isn’t perfect. She’s far from it actually and she knows it. She doesn’t make out she is either. She’s just herself and would rather take a bullet to save those around her than let someone take the shot for her.

Which do you prefer a great hero or a great villain? Getting saved by a hot, hunky man of a male and pleasured until you can’t breathe? Definitely the hero.

What is your favourite movie? And why? Underworld. I love vampires and I think Underworld is the best vampire film I’ve seen. And they have fangs! Plus, it’s full of action and it’s just awesome really.

If you could be anyone in the world who would it be? And why? My main character, Layla. I’d just love to be this beautiful, strong and deadly woman who won’t let anyone bring her down, especially when she sets her mind to something.


Where do you see your writing career in the next five to ten years? Hopefully I’ll still be writing by then and have readers who like the books I’ve written.

Blurb:
Layla, a twenty-one-year-old half-breed known as a dhampir, is incredibly beautiful and deadly. She drinks vampire blood for power and to stop the burning hunger.
The vampire academy is a hundred acres of land surrounded by high tech security to ensure that none enters or leaves. She is in the protection.
When she has lessons with the vampires, she struggles with her hunger and has to learn to trust them—a big issue for Layla because of her past, something she can neither forget nor run from. The past that haunts her dreams reminds her that she cannot hide as she lives her life in the academy.
Then there is Shade—an impossibly handsome vampire and Layla’s one-on-one instructor. Desires she never knew rise whenever he looks at her. She cannot stop how her body reacts to his touch or how much she wants his body and his blood.
It is a forbidden lust that they share, one they must keep a secret from those around them or Layla risks everyone finding out who she really is.
Someone wants her dead. Layla’s goals, deal with the vampires who hate dhampir’s and keep herself alive. Can she do it?

He breathed onto my skin as his soft lips trailed kisses up my breast, to my nipple. He licked the hard bud before sucking on it. I moaned as desire shot though me, and I felt my legs open while large hands cupped the cheeks of my backside. I groaned and ran my fingers through his soft hair as he worried both of my nipples and sucked on them hard, turning the soft pink skin into dark pink. I cried out at the sensation as pain laced with the pleasure shooting through me.

He stopped, his lips sliding down my body once more until he was pressing little kisses on the inside of my thigh. I watched him do so, pleasure coursing through me along with a little fascination. He licked me, leaving a trail of heat before his tongue plunged deeply inside me. I moaned, my head falling back when he slid his tongue up over my clitoris. My legs went weak but he didn’t let me fall, he just simply shifted, putting my legs over his shoulders and resumed pleasuring me.
“Please…” I moaned, needing more, wanting more as I pressed his face closer to me. He shifted and dropped one of my legs, but kept the other over his shoulder, which opened me wider to his touch. He bowed his head and his tongue snaked out to lick my clitoris again as he slid a finger into me slowly and easily. I growled loudly, the sound echoed around the room. The pleasure in the pit of my stomach grew, burning me, bringing me closer to ecstasy as he slid his finger out and then back in before adding another one at the same time. I felt myself clenching around his fingers, close to exploding, when he stopped. I growled, unable to help myself.
“Be still,” his voice commanded while his free hand gripped my hip tightly. I squirmed, only a little, but did as he said, hoping he would do something, anything, to reignite the fire deep inside me. His fingers were unmoving inside me and I struggled not to move myself up and down on them. My heart was thumping rapidly in my chest and I could feel his matching the beat of mine on my thigh. He put his lips around my clitoris, his tongue gently running over it, making me clench a little before he sucked...