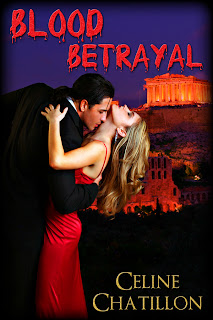 Yes, it's back...author interview Wednesday. LOL Welcome, sweeties! And welcome fellow eXtasy author, Celine Chatillon. It's great to meet you. Enough of my chatter. Please tell us about yourself, Celine.
Yikes! I never know what to say! Do I tell people I'm a sci-fi geek or that I'm a bookworm or that I once studied film or that I'm a wannabe singer/actress and suffer from multiple “writer personalities”? I guess the best thing is to give you my “official bio”:

Where and/or how do you find the greatest inspiration?
I really don't know. Ideas just sort of jump out of the dark at me at times, and I think, “Wow! That would make an excellent story!” So, I assume reading widely and listening to people talk and observing things happening all around me is a constant inspiration generating process.

Why did I choose writing erotic-romance?
A well-published friend at a local writer's group said it was a great way to get published, and it was going to be the next great genre of romantic literature, so we should all jump in and get going. I was hesitant at first, but the more I read and wrote in the genre, the more I liked it. The rest is history. ;)
Which appears first when contemplating a new project: A character, the plot and/or the title? A title and a character almost always pop into my head first. Then with the main character's traits in mind, the plot develops in my mind. I ask myself: What would happen if he/she encountered this/that/or the other (which is where the title inspiration usually fits) and how does he/she react when it does happen? What are the consequences? What are the pay-offs? How does life change for the main character after this life-altering event(s)?

What’s the hardest part of a novel for you to write: Beginning, middle and/or end? Why?
Oh, definitely the middle! You get sort of lost in the doldrums sometimes in the middle of a story (especially a longer novel). I almost always “see” the beginning scene and the ending scene in my head before I start writing, but how to get from point A to point Z? That's the tough part. It takes some discipline and a lot “threats” to keep me writing when I know I need many more plot points to get from “A” to the ending. If it's too difficult, I give up on the manuscript and shelve it for a while. Sometimes I'm lucky and the characters help keep the story moving along and I can get to “the end” before I've lost my way or enthusiasm.

Writing sex/romantic scenes can be a challenge for some authors. Do you find it difficult? If yes, how do you compensate? If no, where do you draw your inspiration?
It depends. Some days are better than others! ;) If I can get inside the character's head, then the sex/romantic scenes aren't any more difficult or easy to write than any other scene. We all relate to others from our core characteristics, so if I know my characters well, then I will know how to write a love scene with them relating to their beloved. I think when I'm having trouble with the “mechanics” of the sex scenes, it could be more of I'm having trouble “seeing” my characters in my mind and feeling what they're feeling. That's when it's good to step back, reacquaint myself with the characters, and step back into their shoes and go from there. When you can “feel” along with the characters, that's when the love scene is working.

Do you have a method you use to write the sensual parts? Do you prefer the sex to be open and bold? Or left to the imagination?
Either way—it can be very open and bold, or it can be hinted at (if I'm writing a more sweet romantic tale). But definitely I write bold and open sex scenes in my erotic-romance tales. That's what the genre demands, and usually my erotic-romance heroines are open and bold women who know what they want, how they want it, and who they want it from. I do love a character who knows his/her mind—it makes it much easier to write sex scenes for them! :)

Who is your favourite character, which you’ve created? And why?
I love all my “children” but I must admit I do adore Brandi Whyne from my humorous/sci-fi/fantasy/erotic-romance series Brandi Whyne and her Incredibly Erotic Adventures. Brandi is a cross between Fanny Hill and Princess Leia you could say! She knows her own mind, she knows whose side she's on, and she knows how to get her own way when they need arises. Brandi is a fun, sassy character that can say very  outrageous things (and do them!) and get away with it in a very entertaining manner. I just can't help love writing Brandi's “memoirs”. She's so real of a character, that she has her very own blog, too: http://brandi-whyne.blogspot.com

Tell us about your newest release.
My newest release is from eXtasy Books: Blood Betrayal
Blood Betrayal is sort of a “pre-quel” to my novel Help I'm Falling for the Vampire Next Door. I wanted to show how the vampire Vlad Drakul first met the deliciously evil villain Leo Van Helsing and made a “deal” with him, and how he'd trusted the wrong woman. (Never fear—Vlad does find the love of his eternity eventually! I may have to write a story with them as  well.)
My vampires are all apart of the “Kindred”, a society of vampires through-out the world who try to keep themselves off the radar while actually involving themselves in human affairs. My next story featuring the Kindred is called Blood Bond, and I'm almost ready to submit it to eXtasy.

Just for fun–
What is your favourite colour?
Blue. I like blue jeans and blue skies, so for me it's a natural! ;)
Which do you prefer a great hero or a great villain?
Hmmm, sometimes I really can get into a great villain. I mean, I enjoyed writing the villain Leo Van Helsing the vampire hunter who shows up in my novel Help I'm Falling for the Vampire Next Door and in my novella Blood Betrayal. He was just so deliciously evil and didn't care who he ran over while he was trying to get his way. There's something very freeing about writing a character who can do no right and enjoys being the bad guy. ;)
What is your favourite movie? And why?
Tough! I love so many movies for many different reasons, but I usually say I'm a big fan of Gone With The Wind when asked about romantic movies. Scarlett O'Hara is the world's toughest (yet beautiful) heroine. Scarlett is the ultimate survivor, and you can't help but keep cheering her on. In the sci-fi/fantasy realm, I love all the classics: 2001: A Space Odyssey, Silent Running, Soylent Green, Star Wars, Lord of the Rings trilogy, The Matrix, Gataca, Shaun of the Dead. (I'm missing a few hundred more here!)
If you could be anyone in the world who would it be? And why?
The next big winner of the Mega Millions Lottery. Some of the money could solve a lot of my niggling problems like paying bills and helping my family members with their assorted problems. And then I would start up a charitable foundation and support tons of worthy causes so lots of people's problems could be solved. It would be a great feeling helping so many others.  :)
Where do you see your writing career in the next five to ten years?
I hope to see my books on the top of the best-seller lists, but to be honest, it's probably not going to happen. If I'm still able to write and publish and entertain readers, while keeping a roof over my head, that'll be enough. :)

Vlad, Leo, and Sofia form a love triangle with a bite and the spilling of blood...
Vampire Vlad Drakul has found the love of his...existence... in the beautiful and intelligent businesswoman, Sofia Martinelli. But is the sex-loving vixen all who she appears to be?

Leo Van Helsing cherishes his family's "calling". Perhaps a bit too much. He'll see the heinous blood-sucker dead and he's not above using others to obtain his goals--even if it kills them.

One fatal night in Istanbul will change Vlad's afterlife forever. Can he abide a Blood Betrayal?

She gently caressed his cheek, then wound her fingers through his shoulder-length black hair. “I don't want to go. I must go. I hope you understand.”
"I understand.”
The words came easily to him, but the emotions behind them did not. He wanted her to stay. For the first time in a millennium Vladimir Drakul felt close to a woman--to this woman. He felt more than just the hunger to satisfy his physical needs and nutritional requirements. His brain had been engaged by Sofia's sophistication and depth of knowledge, his heart engaged by her unselfish giving and receiving in matters of love.


Yes, even loners like the Kindred desired intimacy with others at times. The object of affection did not have to be of their kind--in fact sometimes it was better when it came to expressing their sexuality fully. Many of his kind had simply forgotten they possessed genitalia and the soul-stirring sensations that could be engendered there. Vlad was glad he was not one of them.
”We'll still have this weekend together won't we?” he said, raising an eyebrow.
She looked him straight in the eyes, slowly lowering the sheet to reveal her glorious form to him. “Yes, we do. Let's make the most of it, shall we?”

Thanks for doing the interview, Celine! I wish you the best of success for the future! ~ Blak Rayne
Posted by Blak Rayne Books Blog at 11:30 PM