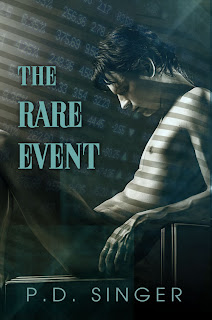 Dwight threw Jon a wry glance over his shoulder, acknowledging that this was a ludicrous way to behave at work, but still kicking out at more or less the right beat, if not with the correct foot. Before the tail of the dance line had gotten around the desks in the center of the wide room, Logan turned to snarl, “Watch your feet, you—” Jon lifted an eyebrow at him, waiting to hear exactly what he thought Dwight was, but Logan wisely chopped it off. Good, Jon’s last explanation of business etiquette had stuck. At least in his presence. Once Jon dropped off the end of the line, Dwight was on his own with the other analyst.

The front of the line wove around to Ricky’s office door again, and the chanting dropped to softer, less organized congratulations, which Ricky would accept as his due. Jon didn’t stop to watch Edgar pound Ricky on the back or ruffle the dark waves of hair out of their carefully combed elegance. He didn’t stay to listen to the analysts offer praise of Ricky’s timing or skill—that was all nonsense, anyway. Still, $730,000 was not to be scorned, and Jon would offer his own sort of congratulations more privately.

He had a few minutes before Ricky would come find him, which Jon used to best effect, taking a swig from the mouthwash bottle and locating a few of the less prominently placed toiletries that the hedge fund stocked in the executive washroom. Far more elegant than the plebian facilities down the hall, the washroom sported a wide couch on the Oriental rug in the dressing area, which gave Jon a place to fidget. The door opened, giving him a jolt that someone like Edgar or Geoff Gorman would actually need to use the plumbing in the marble-tiled room adjacent.

“Don’t want anyone walking in on us again, do we?” Ricky shot the recently installed bolt on the inside of the door. “Damn, but making pots of money buys some of the finer things in life!”

“Like privacy?” Jon was in his arms in a flash, their lips meeting for the first celebration of success. “I thought old Edgar was going to drop his trousers and join in.”

“He gets the big slice of the money and that’s all.” Ricky had his hands on either side of Jon’s head, controlling him for an expert, thorough exploration of his mouth. “I get you.”