WHY MEN ARE SO MUCH HOTTER THAN WOMEN!

Why Men Are So Much Hotter Than Women!
BLMorticia

Greetings fans! Another post for you from the snarky and wicked muse BLMorticia. Today I’m talking about men. Hmmm, what about them? Well, in my opinion, men are so much hotter than women. Not that I wanna sell us gals short, we can be beautiful too but something about a man and the way he looks, he smells, he acts, and talks. Some might be assholes and others might be real sweet. Regardless, we love them don’t we?

I mean, think about what I’m saying here as far as the differences between both. Men can look sexy regardless of what age. They can be young or old and still be attractive. When they do mature, in most cases, they look even better as older men.

Tell me, have we EVER said that about a woman that she gets better with age? If we have then there are very few. Other evidence? Hardly ever have you mistaken one man for another that aren’t related. They’re all so unique, so different, and have their own distinct features.

And even when they don’t necessarily look like models, they can still be sexy! Think about that. Yes, I know, I’ve posted pics of some very hot men so far but stop droolin’ a moment to focus on some of the men you know. They don’t have to be gorgeous models to make you want them. They have a little pudge, might be hairy, no, not like a shaggy dog but we like them with hair or without.

Men have to work hard to keep in shape but we women have to work twice as hard. Going on diets, getting under the knife to tuck in fat on our faces and bodies while most men grown old gracefully just by keeping themselves active.

Oh sure some might really work at it and muscle up to make themselves look and feel good but does your everyday guy work that hard all the time? Maybe he might but I bet most do not.

Here’s another thing to think about. Seemingly, society doesn’t hold men to the same beauty standards as women. I mean, look at the magazines, screaming for women to be thin, wear certain clothes, and only eat certain foods. Americans especially put pressure on their daughters to have a certain look to be considered beautiful. We don’t do that to our men, we ask that they’re tough, intelligent, and good to us as women. That’s pretty much it, but we don’t hold them to a beauty standard.

However, times are a changin’ in the modeling world. More men are deciding to get in front of the camera and show off their wares. These days, men in all colors shapes and sizes are on the covers of the world’s hottest mags, struttin’ down runways, and making a little more money than they did in the past. Why? Because the fashion world is recognizing that a man can be beautiful too. That being said, they still don’t get the scrutiny a female model does but men are becoming just as visible on the covers too. 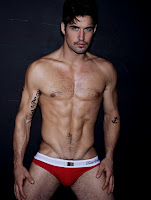 About freakin’ time! So many good looking men out there to look at in the world. Whether they be actors, athletes, or world class models, there are so many different ones to choose from.

And out of all the pictures I’ve posted, do any of them have similarities? Other than race, maybe eyes or hair, probably not. Simply hot! Don’t get me wrong, women can be hot too but damn, so many good looking men in the world. Love em’ or hate em’, we can’t be without them. Well you can if you like, but in my opinion, you’re missing out on the true beauty that is a man.