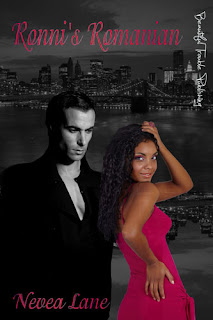 Corporate raider Lucian Covaci knows Ronni’s business is floundering and she has been dodging his company’s attempts to sit her down and buy her out. Although he’s normally the silent out-of-sight type owner, Lucian takes her elusiveness in his own hands. Ronni can’t dodge Lucian when he waltzes into her charity fundraiser and places a ridiculously high bid for an hour of her time.

Ronni can’t believe her luck when Lucian places a bid for a tour of her company. Lucian can’t believe he just acted so uncharacteristically just to meet a client. Now Lucian must convince Ronni that his interest in her goes beyond just business.
Excerpt:
It was difficult to pretend he wasn’t enthused to spend more time with Ms. Cadell, but Lucian was having an even harder time convincing himself that it was more for business than pleasure. From the moment she’d walked up to him, he knew he had gotten himself into unfamiliar territory. Yet he was also the same man who’d struck off to America not knowing anything except that he needed to succeed.

Lucian watched her as her eyes scanned the crowd. Ronni had the type of personality that any man would want to be around, and he couldn’t quite understand why Darius would have called her a stubborn little thing. She didn’t seem stubborn, and the way that dress hugged all of her ample curves, she wasn’t little. Of course, Lucian hadn’t told her he was one half of the company that was trying to buy hers. He still didn’t know what compelled him to bid one thousand dollars on a tour of her company, but he felt justified after seeing the smile that lit up her beautiful face like a night sky.

Awestruck by her smile, Lucian felt himself actually smile back. Damn, it hurt to exercise those muscles. To cover his obvious discomfort with the act of smiling, Lucian reached up to rub his chin, feeling the stubble peppering his face. He greatly needed to shave, and get some sleep, but he wasn’t ready to make the drive back home yet.

As he watched his prey tiptoe toward him, he looked down at her shoes. Although he never did understand why women subjected themselves to that form of torture, he had to admit Ronni’s calves looked damn delicious when she walked in those black stilettos, although they were still ridiculous.

Ronni looked almost relieved when she finally stood in front of him. Before she could utter a word, Lucian picked her up and carried her newlywed-style to the fountain he’d spied hidden behind the hedges of the massive lawn. He felt something swell inside of him as she clung to him, not protesting the fact that he’d just picked her up like a ravaging barbarian. Holding Ronni in his arms at that moment just felt right, and he loathed putting her down when he reached the stone fountain. Despite his desire to keep holding her, Lucian settled Ronni down on the edge of the gurgling Greek fountain and knelt before her, plucking off her stilettos. Dipping his hand into the cool clear water of the fountain, Lucian scooped out some water and sprinkled it on her toes and began to massage her feet.
Purchase Link: Ronni's Romanian
Thank you for the great interview, Nevea! I wish you the best of success in the future. ^_^!!
Blak Rayne
Posted by Blak Rayne Books Blog at 1:00 AM