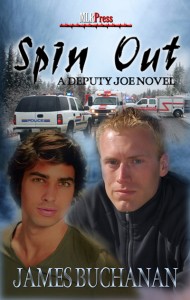 Welcome to 'author interview' Wednesday @ BRB, sweeties. Todays guest enjoys penning homoerotic mystery as well suspense. And, he has a number of excellent titles under his belt. Thanks so much for stopping by, James!

What made you chose to write homoerotic romance in particular?
I think sex is when people are more honest. It is a very powerful emotional and physical dynamic that strips characters to their most basic core. When you are allow to explore character’s responses to themselves and to others when they’re that open you can develop a very strong sense of who this person is, what drives them, what do they need most in their lives. When you close the bedroom door an author closes that aspect of the character’s personality off from the reader.

Which appears first when contemplating a new project: A character, the plot and/or the title? Characters usually. They start talking in my head. I always joke that the difference between a writer and being schizophrenic is that I know those voices aren’t real. If I have characters I’ve worked with before in another book, then the plot may come first.

Has your own life influenced your novels? And if so, how?
I have lived through some very scary shit in my life. I have accomplished things I was told I was not capable of.  What this means, at least in terms of my writing, is I’m willing to take risks, go the step beyond what I’ve done before. If you don’t take risks you’ll never know if you can succeed.  Sometimes things don’t work as well as I’d hoped, however other times that risk creates the perfect scene that crystallizes everything about the character or the book. Also, because of my evil day job as a trial attorney, I am used to trying to intimately understand everything going on in a case, researching, nit picking and dragging  out all the salient points. I also understand, however, that once I have that, it may not all need to go on paper. I do that when I create my characters, decide on their careers and hobbies and create their past life. All that detail may not make it into the finished book. While the reader sees that a character like Brandon Carr (the Taking the Odds Books) is a motorcycle fanatic and that’s enough, I know, in my head, why and how that particular preference established itself.

Do you have a method you use to write the sensual parts? Do you prefer the sex to be open and bold? Or left to the imagination?
I have no particular method, really.  However, I prefer open, honest and raw sex. As I said, it’s where you really get to see into the character’s head.  And it’s part of the tell not show aspect of writing. I can tell you that Deputy Joe Peterson is a BDSM Dominant, and very into impact and pain play. It is much more powerful if I let you into his head and let you feel the sting on his own palm as his flesh collides with the skin of his boy, Kabe, what that does to his senses.

What is your favourite colour(s)?
Black and purple. The colors of bruises.

Which do you prefer a great hero or a great villain?
A great villain -- especially if he’s an anti-hero. Villains are always far more fun. Thor may have been one sexy hunk of man, but Loki smoked. Sensual and sexual and predatory. Heros are like big German Shepards. They’re lovable and beautiful, but it’s all right there. A good villain is like a wolf or panther. Mysterious, secretive with layers of sensuality coating their movements.

What is your favourite movie? And why?
Silence of the Lambs. It has not only a great villain in Jame Gumb (Buffalo Bill) but also, in Dr. Hannibal Lecter, an anti-hero who is even more intense and deep than any hero could be.

If you could be anyone in the world who would it be? And why?
Actually, I like being me. I’d like to be a richer version of me, there are some issues in my life I’d fix, but all in all, I have a pretty good life. I have two good careers. Even if I call law the “evil day job” because I don’t have as much freedom to just drop everything and write when I want to, I like getting out there, being on stage and winning cases. I’m successful as a writer. I’m not on the New York Times best seller list, but that doesn't necessarily equate to my version of success.

Deputy Joe Peterson understood the risks when he got involved with ex-con Kabe Varghese. He didn't, however, see fit to warn Kabe. Now, in the middle of searching for the killer of a local boy, he has to contend with his career and his relationship spinning out of control. Solving the case may be easier than repairing broken trust.

Ain't nothing like the mountain air first thing in the morning. As I swung out of my new department issue Explorer, I could almost taste the first touch of snow on my tongue. Wouldn't be long before winter hit. That meant skiing, Christmas and snuggling up next to my Kabe's fine body under a layer of quilts. Not that I needed much excuse to do that. Three, sometimes four, nights a week he spent over at my place...and boy didn't the gossips like to pass that bit around.

No sense ruining my day thinking on that.

I headed on into the oldest dinner in Panguitch, nodding as I walked into the cafe and getting a round of grunts and, "Hi, Joe." in return . A few other folks I said howdy to even though I knew I'd get nothing but glares back. Didn't mean I still shouldn't be polite. Slid into my usual booth in the back corner so's I could watch everyone coming and going. I didn't bother to order nothing. Jane, at the front counter, just always seemed to know what I was in the mood for and brought it on out to me.

A knot of men clustered around the big table, all of them with heads down and trading low whispers. If'n I didn't know every last one of them and what they were up to, I'da been suspicious. But they all either made their living off the big hunts or liked to pretend they did. Hunting season meant stingy strategy sessions rivaling those of warring nations. Everyone trying to figure what each other knew about where the game was and each trying not to let spill what he'd figured already.

After a few bites into my pancakes, I caught Carl Haley standing up out of the group of hunting guides and wannabes. He stretched. He hemmed and hawed a bit about going. Then he pulled out a few bills, tossed them on the table and...walked out.

I actually dropped my fork. Slipped right out of my hand. I think the big table, well, all them just froze in place halfway through whatever they was at. See, 'cause all that play outta Carl, at this time in September, usually prefaced him sauntering on back, sliding into the opposite side of the booth and grinning out, "So, seen any deer lately, deputy?"

I cain't say how it even hit me right then. My mind just kept backfiring on how he'd pretty publicly snubbed not only me, but a decent professional association. And Carl wasn't even a member of the Latter Day Saints, just a cowboy, one who apparently let his prejudices rule his wallet. Sorta set me down into this whirlpool of really black thoughts. Most times something like this happened-you know after everything hit the fan about me liking guys and shacking up with an ex-con pretty boy and getting excommunicated-I managed to just stick it in my pocket. But there's those you expect it from, and then those that hit you blindside.

Carl caught me off guard.