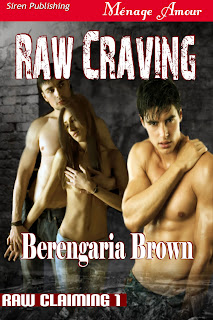 Where and/or how do you find the greatest inspiration?
Ordinary people overcoming adversity inspire me. When we grow up we realize that just as Mommy isn’t going to fix the world, neither is the government. That’s when we decide to make our own little corner of the world comfortable for us. I love watching how people do that.

Which appears first when contemplating a new project: A character, the plot and/or the title?
Always the characters. They just turn up in my head and start talking. When I know what they want, and where we’re going, I begin writing.

“Raw Craving” is the first book in the futuristic “Raw Claiming” series, and is available at Siren BookStrand.

What is your favourite colour(s)?
Green

Which do you prefer a great hero or a great villain?
Hero.

What is your favourite movie? And why?
Any James Bond movie. I love them all. Sex and adventure. What’s not to like?

If you could be anyone in the world who would it be? And why?
The mistress of a 90-year-old billionaire.

Where do you see your writing career in the next five to ten years?
I’d like to be on the New York Times Bestseller list.

Blurb:
Ayla thought it’d be just like Y2K all over again. But this time the world really did change. Now, she’s living in a community with far more men than women and has to choose some to live with. Ethan and Gideon helped rescue her, and she’s drawn to them. The sex is great, but she has to learn to live in a community that must become self-sufficient.
Also, what’s going on outside? Has the world changed forever? Will the men be torn from her and sent outside again? Should she go, too? And into what?

Finally, she stood up and wiggled the panties down off her hips, letting them and the bra drop to the floor with the rest of her clothes.

Her pussy was dripping with cream. Just seeing the men so very aroused was enough to light her own fire. She really hoped she would get to suck one of those cocks. She didn’t mind which one. Both were long, wide, and ready for action. Just as she was. It’d been a long time since she’d had sex, and she was more than ready to experience an orgasm with these very attractive men. Hell, why limit herself? Two orgasms.

The men looked at each other then seemed to come to an agreement.

Gideon sat on the bed with his back to the headboard. “Lie down and put your head in my lap,” he said a little hoarsely.

Fine by her. Ayla scooted across the bed on her ass, enjoying the way the soft cotton sheets rasped against her sensitive skin. She settled her head in his lap, turning her face into his muscular belly and swiping the skin there with her tongue before tilting her head back to see his reaction.

Gideon’s toned belly tasted tangy, salty. And his eyes looking down at her face were glazed with lust. She turned her head to Ethan. His cock was standing up away from his body, almost leaning toward her. The head was red and the shaft was long and swollen. He tugged the nightstand drawer open and pulled out a string of condoms, tore one off, and hastily rolled it down his shaft. Then he climbed on the bed and kneeled across her body.

Very gently, he held her face and kissed her mouth. Then he stroked a hand across her body, over her breasts, down over her rounded tummy, and onto her mound.

Ayla had half a second to be glad that her belly was flatter than it used to be, since her stash of chocolate had run out weeks ago, before Ethan sank his fingers deep into her cunt, making her desire hit the red zone and her inner muscles clench around his fingers. They were so much bigger than hers and felt way better. Of course, a cock would be even better still.

Her soft moan was hidden by his much louder one. “So good,” he said.

“Hot and wet and perfect.”

Ethan kissed her again, a swooping, demanding claiming this time, then held his cock at her entrance. It was almost as if he were asking permission from her, so she nodded, and then he drove right into her in one long, deep stroke.

Thanks for stopping by, Berengaria. Raw Craving sounds great! All the best for the future.
Posted by Blak Rayne Books Blog at 11:00 PM