DREAMS OF A HERO - CHARLIE COCHRANE 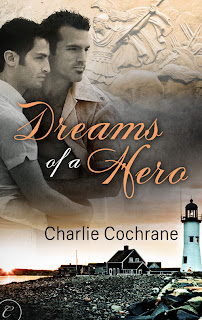 Where and/or how do you find the greatest inspiration?
I have no idea. Seriously, ideas just come into my head and I start to write. Sometimes things spur me on particularly – a little scene I’ve witnessed, like two people arguing in a car park, or something I’ve read which has sparked off the question, “What if?” Sometimes it’s more nebulous; a piece of music, a spectacular sunset, a walk along the beach which just makes me want to get down and write.

Which appears first when contemplating a new project: A character, the plot and/or the title?
Usually two characters and a conversation. That’s exactly how “Dreams of a Hero” began, with the conversation about whether the golden mask really had belonged to Agamemnon. For me, those conversations set the tone of a piece, they help me to get to know the characters and they start the story on its journey. I’m a total pantser so that initial part can take me anywhere. In the case of Miles and Roger in this story, it led to strange dreams of ancient Greece and then a modern day challenge to put those dreams into action.

Has your own life influenced your novels? And if so, how?
Only so far as I hoard away little incidents from the life of the Cochrane household  (someone refusing to take a dose of medicine, adults rolling down hills and thinking they’ll die half way down) and then use them for my characters. Some of the dialogue, especially the funny stuff, is drawn straight from life, too.

Writing sex/romantic scenes can be a challenge for some authors. Do you find it difficult? If yes, how do you compensate? If no, where do you draw your inspiration?
I find them incredibly difficult, but very rewarding if I write them to my (and my editor’s) satisfaction. I try to find some sort of metaphor – have got a story in edits which is set at London 2012 Paralympics, so I’ve made the sex scene full of sport related puns.

Who is your favourite character, which you’ve created? And why?
Jonty Stewart. He’s great fun to write, he’s the sort of man you’d love next to you in a crisis, he’s flawed enough to be interesting and he gets away with saying and doing all sorts of things. I guess he reflects the mischievous part of my personality, too. (And as I see him in my mind’s eye, he’s ridiculously handsome!)

Dreams of a Hero was inspired originally by the Matt Alber song  “Beotia”. And the Mary Renault Alexander trilogy. I wanted to write about the Theban Band but it’s not an era I know enough about so I cheated by combining the modern day with dreams set back in Ancient Greece. Thos dreams have an unexpected effect on the person who has them.

What is your favourite colour(s)?
To wear?  Black and red. To look at? That piercing ble you only get in England in a spring or autumn sky.

Which do you prefer a great hero or a great villain?
Great hero, of cause, although I like them a touch flawed. Jack Aubrey, Peter Wimsey, Alan Turing…

What is your favourite movie? And why?
Master and Commander. Because it makes me laugh and cry and grab the edge of my chair. And it does it all with intellectual and emotional honesty.

If you could be anyone in the world who would it be? And why?
If you’d asked me that when I was younger I’d have said, “Someone who was so good at cricket that they’d be the first woman to have played for the England Men’s team – and I’d like to be drop dead gorgeous, with it.” Now? I wouldn’t want to be anyone but me.

Where do you see your writing career in the next five to ten years?
Where I’d like it to be is for the Cambridge Fellows series to have got mainstream cozy mystery recognition. With maybe a TV adaptation in the works?

Dreams of a Hero

Mild-mannered and unassuming, Miles is on a journey he never expected. After a visit to Greece with his partner, Roger, he begins to experience vivid dreams in which he travels back in history and takes on the role of avenging hero.

Roger notices Miles's newfound bravery during his waking hours and is concerned that his lover is changing into someone he doesn't recognize.

When they discover a gay-friendly café is being plagued by violent thugs, Miles is uncharacteristically determined to take action, no matter the cost. Roger argues it would be both dangerous and pointless to intervene, but Miles insists he's been called to fight an army, and now he's found one.
Excerpt:

The shield was tall and heavy, but the bearer was taller still. This gave little advantage when it meant he could get such a clear view of the advancing lines of troops. Miles adjusted his stance for comfort, staring oncoming death in the eye. “Which one is he?”

“The small one, that’s what they say.” Roger held the spear straight, never wavering even in the heat of impending battle. “Word is he’ll be leading the cavalry, away from where his father’s stationed.”

“Can’t have two firebrands together in case the whole world catches flame?”  Miles managed a rueful smile. “They say he’s handsome, the son.”

“And spoken for.” The smile was returned.

“I only said he was rumoured to be handsome, not that I wanted him to carry me off to his tent.” Miles adjusted his stance again, eliminating any chink in the shield wall.

“You might be grateful if that were your fate, come nightfall.” Roger shivered. “I  pray we’ll survive to joke about this. Now comes the deluge.”

“Deluge? Don’t you mean the conflagration, with the son of fire at its head? And with Hades’ gates wide open in his wake.”

The company turned slightly, as the horses came charging over the plain of Chaeronea.

Miles woke with a start.

Thanks for the great interview, Charlie! I wish you the best of success in the future. Dreams of a Hero sounds wonderful!
Blak Rayne